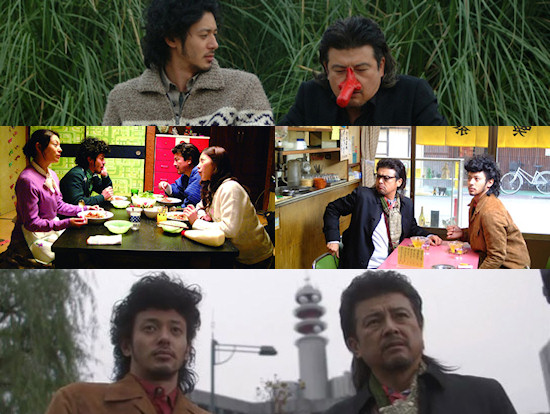 For layabout college student Fumiya Takemura it seemed like a perfect deal.  In exchange for the cash he needed to pay off his debts all he has to do is follow debt collector Fukuhana around Tokyo - simple, right?

Originally a novel by Naoki prize winner Yoshinaga Fujia, and released and directed by Miki Satoshi in 2007, Adrift in Tokyo at first glance seems relatively boring –  two men, Takemura and Fukhana, wander seemingly aimlessly through suburban Tokyo, occasionally walking and talking to each other – but as time passes, and especially if you take the time to really pay attention to this film, you begin to note the many different aspects of the characters, like Fukuhana's surprising knowledge of classical piano music for instance, or Fumiya's disastrous attmpt to impress a girl. Also, through the conversations between the two and the people they meet, together with their observations, you as the viewer gradually come to realise that there's more to this film that meets the eye.

Another interesting aspect of the film is that at times it's more like a series of nested plays within plays, with Takemura and Fukuhana occasionally walking in on the lives of other people, who have connections which are either tenuous at best or absent entirely in relation to the main pair of characters, only to leave again without any resolution.  In fact, the only other real plot thread that’s followed throughout the entire film is one involving three co-workers of Fukuhana's wife, who wonder about the reason why she isn't at work that day – a reason that is not only linked to Fukuhana himself, but the reason for the trip in the first place...

For me though, the main star of this film for me, apart from the actors involved, is the backdrop for the film itself – Tokyo. With the vast majority of scenes filmed on location in suburban Tokyo itself, and many of the actors appearing at times to be ad-libbing their lines, their execution frequently seems so natural that it gives a sense of realism to the setting, as if this could have happened on any day and in any part of the city.

In closing, Adrift in Tokyo blends together comedy and drama into a perfect mixture - it's a hallmark of Director Satoshi Miike's earlier works and it's one  that will make you laugh, cry and appreciate the strange and yet fascinating world which his creations dwell within.

Japanese audio with English subtitles.  There are only a couple of extras on show here – a seventy minute “making of” documentary (effectively just a guy with a video camera shooting individual scenes from the movie, interspersed with some short interviews with members of the cast) and a selection of trailers of other Third Window DVDs.

9
At times funny, at others insightful, this film is nonetheless ideal for a quiet night in.
COMMENT AND DISCUSS
blog comments powered by Disqus