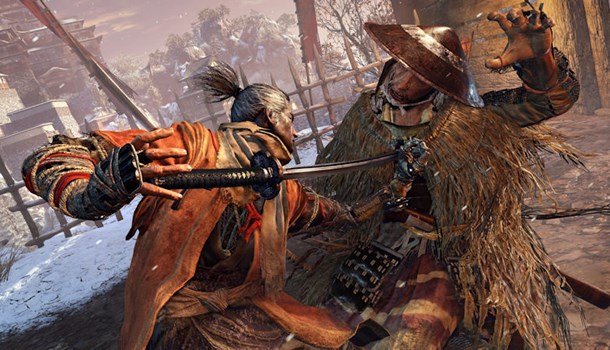 As a fan of the Dark Souls series, I was very curious about Sekiro: Shadows Die Twice when I first heard about it. Admittedly, the fact that the game was an action-adventure game rather than an RPG cast some doubt on whether I could love it as much as the Dark Souls games. That, combined with information that the game was rather short at about 20 hours, meant that I ultimately decided to wait until the game was on sale to pick it up. Having finally played it, not only can I say that it's worth full price but it's one of the best games that I have ever played!

Sekiro: Shadows Die Twice is set in the Sengoku period of Japan in the land of Ashina which has been taken by Isshin Ashina in a coup. During the battle, a warrior named Owl comes across a young boy on the battlefield. Impressed by the boy's lack of fear, Owl adopts him and names him Wolf. Once Wolf has completed his training many years later, he serves as a shinobi for Kuro, known as the Divine Heir due to his blood that grants immortality. However, Kuro is taken and Wolf loses faith and is captured. One day, a letter falls into his prison, informing him that his master is nearby and to go rescue him. After rescuing Kuro, they encounter Genichiro, the grandson of Isshin, and, after fighting, Genichiro cuts Wolf's left arm off, leaves him for dead and takes Kuro once more. Wolf is brought to a dilapidated temple where a man known as the Sculptor has rescued him. With the aid of the new prosthetic arm that's been attached to make up for the one he's just lost, Wolf is determined to once more rescue Kuro from Genichiro. 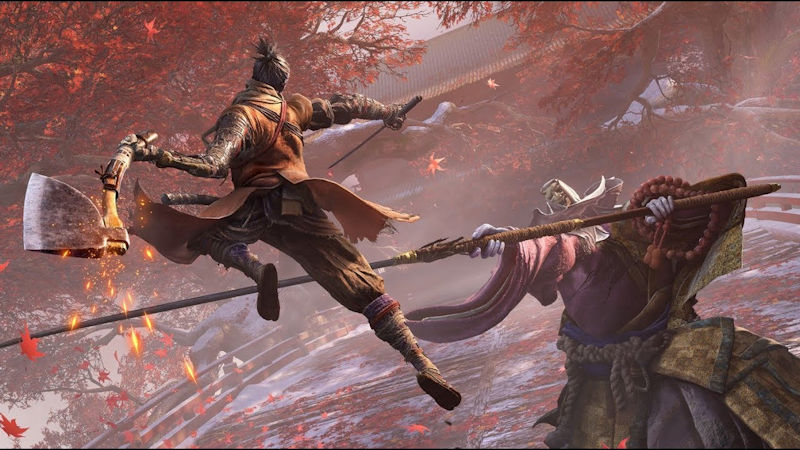 The story of Sekiro: Shadows Die Twice is more straightforward than in the Souls series with cutscenes that deliver exposition and more interactions with NPCs. However, that is not to say that the storytelling style of the Souls series has been completely discarded and you will often find yourself understanding the world and its characters more clearly if you take the time to read the item descriptions and observe the environment. To give an example, there is an ability used by an opponent at the end of the game that will surprise and confuse you if you have not read the item description of a scroll that you can find. Nonetheless, the story is quite satisfying with several twists, a sense of wonder and some surprisingly emotional moments. In particular, I want to draw attention to the fact that this game has four different endings. Amusingly, one of these endings can be triggered earlier than the others and will result in the player missing out on the final area of the game and quite a few bosses although, in turn, you get to face a boss fight that is not available in the other endings. The three remaining endings can be decided at the end of the game although two endings require you to do a side-quest for each of them in order to unlock them as options. Each ending is dramatically different and, importantly, satisfying in its own way.

In terms of gameplay, one of the first things that many people will notice is the new combat system that has a steep learning curve but is immensely rewarding. Wolf and his opponents all deal two types of damage, vitality and posture. Vitality is the standard health you see in most games in that if you or your opponent run out of it, death occurs. Posture refers to your or your opponents stance which, when broken, will result in a deathblow. A single deathblow is sufficient to kill most enemies while some, typically bosses and mini-bosses, will require multiple deathblows to finish off. Posture damage is dealt by attacking as well as by deflecting which is where you block within half a second of being hit. Additionally, some enemies have what are called "Perilous Attacks" which cannot be guarded normally. Instead, there are three basic types, thrust attacks, sweep attacks and grabs. A thrust attack can be deflected although a skill called Mikiri Counter allows you to do enormous posture damage by dodging at the exact moment the attack connects. Sweep attacks cannot be blocked or deflected but Wolf can jump over them and deliver a counter by jumping off of the enemy. Finally, grab attacks cannot be countered with the only option being to put distance between yourself and the opponent. However, enemies typically are vulnerable after a grab attempt and can be dealt decent vitality and posture damage.

Additionally, your prosthetic arm becomes an essential combat tool over the course of the game. Initially, the prosthetic arm is only equipped with a grappling hook which allows you to climb buildings, cliffs, etc. However, you also find prosthetic tools such as shuriken, firecrackers, a spear amongst many others which can be integrated into your arm to provide additional functionality. You can even begin upgrading these tools, not only making them more effective but introducing new functionality as well. Admittedly, some prosthetic tools are more useful than others but all serve some kind of purpose, even if it's only in specific situations. 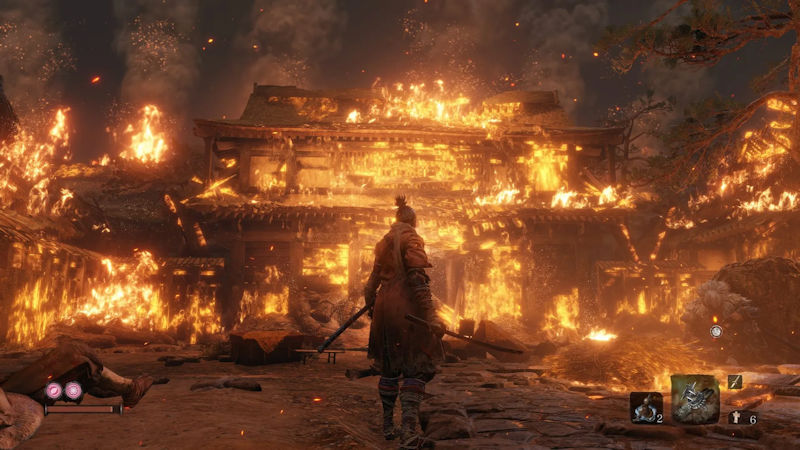 Stealth is also an important new mechanic where you are able to pick off enemies one by one. If you manage to approach an enemy without them being aware, you're able to deliver an instant deathblow. You can also deliver these deathblows by jumping onto an unaware foe or by grabbing them while you're hugging a wall. One of the more awesome and unique aspects of this mechanic is that, while it's rare you're capable of doing this to a boss, you're often able to sneak up on a mini-boss, deliver a deathblow and halve their health before the battle has even begun. Clearing out an area of regular enemies before doing this to a mini-boss is immensely satisfying and one of the best stealth experiences I've ever had in gaming.

Despite not being an RPG, there is still a way to develop Wolf and make him stronger in Sekiro: Shadows Die Twice. Every time you slay a mini-boss, you get a prayer bead. By resting at a Sculptor's Idol, this games version of a bonfire, you get the option to convert four of these prayer beads into a prayer necklace which increases both your vitality and posture. Similarly, by slaying bosses you get memories associated with that fight and, by offering them at a Sculptor's Idol, you con convert them into remnants which increase your attack power, allowing you to deal more vitality and posture damage. While it's quite a straightforward way to develop Wolf, one issue that might arise for some players is that, unlike in Dark Souls, there is a limit to how strong you can become. This means that you can't simply grind to get stronger (well, technically you can but I'll get onto that in a bit) and if you run into an enemy that you can't defeat, you might need to explore somewhere else or, if you've already explored elsewhere, spend time learning the boss's moveset in order to defeat them.

I mentioned before that you can technically grind to become stronger and that's where the skill system comes in. Throughout Sekiro: Shadows Die Twice you can find esoteric texts that teach you new skills. To unlock these, however, you have to spend skill points, which are gained by killing enemies, in order to activate them. There are three types of skills, Combat Arts which have to be equipped and have to be used by the player in battle, Shinobi Martial Arts which are always active and allow you to do new things in battle and Latent Skills which are always active and provide a passive buff. While these skills can be incredibly useful, several of them feel mandatory to me, none of them increase Wolf's health, posture or attack power. There is an item that you can obtain very late in the game that allows you to convert five skill points into an extra point of attack power but it's rather tedious to use and I'd just recommend investing in skills, doing all the content you can and learning each boss's pattern.

Having played the game on PC, I have the say that the game is beautiful. The setting of a feudal Japan with fantasy elements is expertly crafted with some truly stunning scenery. When you're standing atop a castle, looking down on the area you have just traversed or journeying through a valley filled with giant Bodhisattva statues, you are just constantly surprised with how gorgeous everything looks. Bosses and monsters are visually creative and the major characters of the story are impeccably designed.

I've been heaping praise on this game since the start of this review but, as much as I believe this game to be a masterpiece, there are one or two things that do bother me within the game. Around a third of the way into the game, you are given a false choice where if you pick the first option, your character just says that they can't do it and returns you to the choices. This game design is infuriating and I hate it whenever it crops up in any game, let alone one as great as this. Admittedly, there is quite a bit of reuse when it comes to mini-bosses and, while the game generally does a great job of making each encounter with them feel fresh, you do eventually find yourself thinking "I'm fighting this guy again?".

Nonetheless, I think Sekiro: Shadows Die Twice is a modern gaming masterpiece and has set a standard that many other games will struggle to live up to. It has also renewed my confidence in FromSoftware and, in particular, Hidetaka Miyazaki. He has proven that he is not just a genius at developing action RPGs but that he is capable of tackling a new genre and completely reinterpreting it in a new, fresh way. If you haven't given Sekiro: Shadows Die Twice a chance yet, pick it up, learn the intricacies of its combat system and experience one of the greatest games I have ever had the pleasure of playing.

10
A modern gaming masterpiece, Sekiro: Shadows Die Twice sets a new standard for action-adventure games and needs to be played.