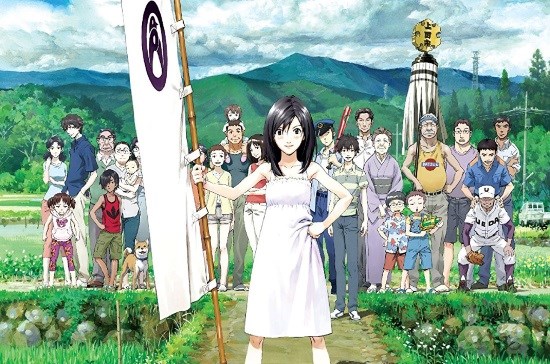 It's been nine years since Mamoru Hosoda released his fourth feature film, Summer Wars onto the big screen but, now at the end of 2018 most people are currently focused on the recent release of his latest feature, Mirai. But perhaps people need to take the time to pause and look back at what made one of the industry’s greatest director’s what he is today.

Arguably Hosoda's greatest work, Summer Wars’ story of the effects of an internet disaster and its effects on the world and the lives of a formerly noble family is still fantastic viewing even now. The characters, with their designs by Evangelion character designer, Yoshiyuki Sadamoto, are vibrant and unique, springing to life under Hosoda's direction. The story is in turn wickedly funny, tense and touching and still moves the viewer even after a tenth viewing. Whilst the family in question may not exactly be typical, the events that they go through in the course of the film - grief, loss, hope, estrangement, redemption and unity are very much things that every family must go through at one point or another, makes every character instantly relatable to the viewer.

But it's not just the fantastic characters, visuals and story that makes this fantastic in our opinion. It’s very much also to do with just how much Hasoda has crafted the world into one that not just remains believable in today's world, especially with our “always on and connected economy”, but arguably is now even more relevant and powerful than it's ever been and a potential warning to future policy makers!

You only have to look at the past couple of years where there have been multiple reported cases of hacking attacking dozens of high level infrastructure targets such as the NHS. Both the US and UK have reportedly had their political landscapes shaped because of such interference. There have been dozens of high level data breaches from both personal devices such as the so-called ‘fappening’ and from organisations up to and including arguably the world's premiere and best-know social media site, Facebook.

With these kinds of events now becoming more and more commonplace and having more and more of an impact across the world. Hosoda's vision of a world where OZ, the film’s concept of a unified and open internet, is hacked by an artificial intelligence that causes chaos as all the integrated pieces of infrastructure from power to medical to traffic fail with catastrophic results, hits closer to home than ever before. The fact is that this fictional world is closer to ever to reality and that the events depicted are now becoming more science fact than fiction. While the hacks which occur in the current era affect our personal security, financial data and are mostly designed to relieve us from our hard earned money, there are evidently other activities taking place which are much more sinister. As Summer Wars shows us, its sometimes the little things which have the highest impact. Simply causing various alarms to trigger is enough to force the authorities to respond, spreading themselves dangerously thin.

It's not all doom and gloom that the film predicts though. The idea of OZ, a unified internet where everyone can communicate, is becoming more real with every passing year. OZ in Summer Wars has almost universal connectivity working from pagers, TVs, computers, phones and even the humble Nintendo DS. OZ also shows us an example of how social media accounts are increasingly linked to every aspect of day-to-day life with Facebook in particular often being an option to access many services rather than a completely separate account. On top of this whilst the film shows the characters exclusively using screen based technology, OZ is arguably the best depiction of how virtual reality would look when applied to the internet as more than just a pair of monitors strapped to your face - rather OZ is a 360 presentation where normal spatial rules don’t apply. It’s certainly much more likely that this becomes the norm for any future VR spaces as opposed to say the bustling city depicted in Ralph Breaks The Internet or Ready Player One, feeling more like the environs of a space station where low gravity removes the need for things to conform to how they do on the ground. The scalable sprites and avatars feel much more real than the fully realised full 3D bodies shown in these examples.

OZ also showcases enhancements in translation technologies - instantly translating all languages in a way that we are not really all that far away from today in a world where Google will have a solid stab at translating the written word and even audio can be translated though not quite on the fly - both of these concepts are depicted within the films incredible virtual environs and, are now becoming common to those who can afford the babelfish style ear buds.

Everyone likes to sit down and watch an old classic now and again, but it’s certainly rare to find an older film that becomes more relevant to the world in the present rather than as a relic of what has gone before and especially one which manages to predict elements of the future so successfully.Summer Wars certainly falls into that category.

Why not go back and give it another look, or if you haven’t managed to catch it yet then now is certainly an interesting time to do so.

Summer Wars is available on Bluray from Manga Entertainment.