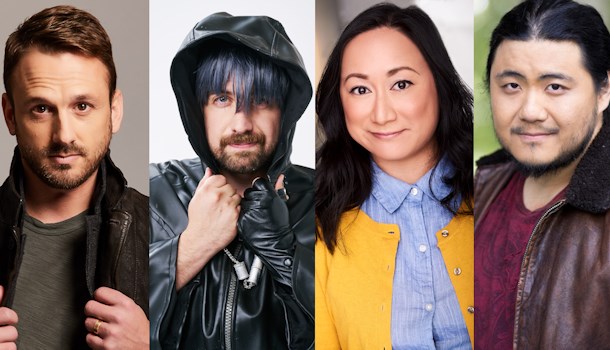 
Jujustsu Kaisen by Gege Akutami made it's manga debut in 2018, serialised in Shueshas Weekly Shōnen Jump, going on to sell millions of copies. Following the trials of Yuji Itadori, a high school student who joins a secret group of sorcerers to combat a powerful curse, the anime adaptation arrived on Crunchyroll in November of last year. We were fortunate to be given access to the English voice actors who bring the tale to life, and our own Reobert Frazer and Russell Phillips organised the interrogation!

A quick rundown on our four voice actors:

Adam McArthur is an American voice actor with a background in martial arts, he works in both animation and video games. His most famous role is Marco Diaz in Disney XD's Star vs The Forces of Evil, which ran for four seasons. He provides the voice for Jujutsu Kaisen's main character Yuji Itadori.

Ray Chase is a prolific voice actor who works in everyting from video games to audiobooks, some of his most notable roles have been in Demon Slayer, Final Fantasy XV and Jojo's Bizare Adventure. He plays Ryoumen Sukana, the curse that ihabits Yuji!

Anne Yatco is a forensic scientist turned voice actor, and was nominated for "Breakthrough Actress" in 2018! She has worked on Brand New Animal, Devilman Crybaby and Children of the Whales. In Jujutsu Kaisen she voices Nobara.

Kaiji Tang is a prolific voice actor based in LA. He has worked on cult-classics anime such as Kill la Kill, One Punch Man, Berserk and Beastars - he also hosts a channel on Youtube called Voices of Gaming. He voices the teacher, Satoru.

Are there any manga or anime that you're reading or watching recreationally at the moment?

AM: Yes! My Hero Academia and The Promised Neverland. Both of which I absolutely LOVE.

RC: I'm watching One Piece actually - still have a long way to go before I'm caught up but I'm almost at a hundred episodes!

AY: I’m currently watching Fire Force, Akudama Drive, Yashahime, Keep Your Hands Off Eizouken, Horimiya, Attack on Titan, and Promised Neverland! Also, I recently binge-watched Sarazanmai, and that just wrecked me emotionally. As far as manga, I’m keeping up on Jujutsu Kaisen (of course) and My Hero Academia, but I also recently read the first three volumes of Witch Hat Atelier, and it’s so beautiful!

KT: I'm attempting to catch up on “Attack on Titan” because I've fallen desperately behind. Other than that, honestly, a bunch of trash Isekai shows that may or may not be too shameful to mention. I also just caught up with “Is it Wrong to Try to Pick Up Girls in a Dungeon?,” speaking of possibly shameful things to watch, but I can't help it I love it. Still sad “Food Wars” is gone. As one of the three people who watched the last season, I want more.

Jujutsu Kaisen has plenty of battles and fighting that require a lot of hissing and grunting. Have you ever felt self-conscious about shouting in the voice booth, and how did you overcome your nerves?

AM: Actually no! I’ve been doing martial arts since I was a kid and you get over the embarrassment of having to Kiai or yell when you’re fighting real quick. Most of the time when you’re recording, you’re in a very safe and nurturing environment. Everyone in the studio is there to achieve the same goal so it’s nothing but support.

RC: I feel like one of the requirements to being a voice actor is to not feel self-conscious about making silly noises, but rather having a deep unrelenting hunger for opportunities where you are encouraged to do so!

AY: I think efforts and battle noises are fun to do, so I get really into it. This might sound weird, but it’s actually kind of therapeutic for me. However, since I’m recording mostly from my apartment nowadays, I just try to remember to text my neighbors so they don’t think I’m in any kind of real trouble!

KT: I got all of that out in theatre before I moved to Los Angeles. Being a silly dude in the booth is not nearly as nerve-wracking as being a silly dude in front of a live audience night after night. It's my job to absorb the information the director gives me and then remove them and everyone on that side of the glass from the equation as best I can when it comes time to record. Plus yellin' is fun! 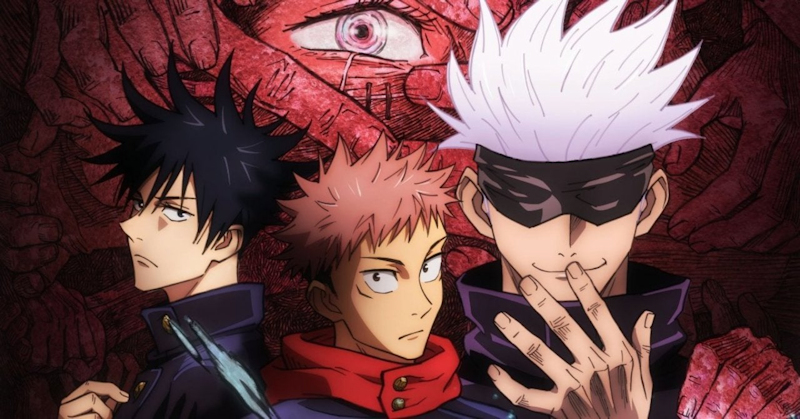 What can you tell us about your favourite scene in the show?

AM: I have so many! The thing I love most about Jujutsu Kaisen is that it has everything; comedy, horror and action. One minute you’ll be laughing and the next something crazy will happen. I’ve really loved the 3 episodes where we meet Junpei. What a rollercoaster!

RC: I gotta say, the ending song is always my favorite! Every time it comes up I just have to watch it all the way through.

AY: My favorite overall scene in the show so far is Gojo’s domain expansion in episode 7. The animation is so deliciously cool and trippy, and it displays just how effortlessly powerful Gojo is. But my favorite Nobara scene is definitely her fight with Nishimiya in episode 17. The fight animation is outstanding, and it’s such a showcase for the badass Nobara!

KT:  I was a character by the name of Red Magnus in Disgaea 5. In VO we operate on a scale of 1 - 4 in vocal volume. 1 being a stage whisper, 2 being normal conversation, 3 being slightly elevated, and 4 full-on screaming GRENADE. Well, Red Magnus at a default exists at a 3.5 at the lowest. I pushed myself a little too hard and I ended up coughing up some blood. Probably would approach that differently now.

What has been the most challenging VA role to perform - and why?

AM: I would say my role as Yuji on Jujutsu Kaisen has been the most fun and challenging. Not only does this genre of animation require a lot from an actor, COVID has created additional challenges like recording from home etc. It’s definitely keep me on my toes!

RC: Eve from Nier: Automata was a really hard role. There was so much crazy long screaming, and we voiced him multiple times as we got to know the character over time and how he changes. It was a really tough day!

AY: I voiced the teacher and one of the students in an educational web series called “Twinkle Trails,” and in almost every episode the teacher sang a song. So in every recording session, I had to record lines for both characters and record a new song. It was challenging, and I definitely learned the importance of endurance in longer recording sessions! But I also want to say that dubbing remotely during the pandemic has presented its own unique challenges. I’m connecting to the director and engineer over the internet, so sometimes there’s a lag in the video, or my sound drops out, or a plane flies overhead, or I didn’t turn the gain up/down enough before a take. It’s a challenge to juggle all of these things AND deliver a good performance. I just hope I’m doing a good enough job working through it!

KT: I was a character by the name of Red Magnus in Disgaea 5. In VO we operate on a scale of 1 - 4 in vocal volume. 1 being a stage whisper, 2 being normal conversation, 3 being slightly elevated, and 4 full-on screaming GRENADE. Well, Red Magnus at a default exists at a 3.5 at the lowest. I pushed myself a little too hard and I ended up coughing up some blood. Probably would approach that differently now.

Your character Yuji gets his powers from swallowing a zombie finger. Would you have the stomach for a "Bush Tucker Trial" yourself or do you tend to follow the cooking instructions on the packet at mealtime?

I had to Google what this meant! I’d really like to think I could handle eating something crazy, but if I’m being honest I’m so weak! I mean don’t get me wrong, I’m a very adventurous eater, but when it comes to bad tasting or stuff that’s still alive… that’s a hard pass from me.

You've had a recurring presence on the fan-favourite JoJo's Bizarre Adventure and voiced multiple different roles over the series. What song would you name your own Stand after?

You have a packed schedule and have voiced around ninety roles in just five years. Never had to worry about a double-booking or bringing the wrong tone into the booth?

Fortunately if you're voicing someone recurring, they will always play you a vocal reference of what you've done before. Otherwise there would be no way of getting things done!

Your character Nobara is known in Jujutsu Kaisen for being a fast-talker. Has a quip ever got you out of a jam?

You were nominated for breakthrough actress in 2018. What has your journey been from then to now?

The roles that got me that nomination came around the time that I left my former career as a forensic scientist to pursue acting full time. I did accident reconstruction for a private company in Los Angeles for 7 or 8 years, but I was also acting on the side. After I left that job, I started taking VO classes again to re-immerse myself in the craft. I did improv and sketch comedy as well, which helped keep my skills sharp. In 2019, I signed with my VO agent at Vox, and I started to audition a lot more. And then I started to book more, including Jujutsu Kaisen! The last year or so has been crazy and exciting for me as a voice actor (especially with the transition to recording from home), and I’m really excited for what the future holds!

Your character, Satoru, is the teacher and authority figure on the cast. Would you have any advice for an aspiring actor you would take under your wing?

You voiced the lead Ichiban Kasuga in Yakuza: Like a Dragon - a game which we loved! Video games tend to have enormous scripts even larger than long television shows, was it a marathon session in the booth?

We recorded Yakuza: Like a Dragon in 4-hour bursts over a period of a few months. So while yes, it certainly was a beast to get through, I wasn't spending like 12 hours at a time in the booth or anything, thank goodness. I think Ichiban would have ended up sounding a lot more exhausted had that been the case, hahaha.