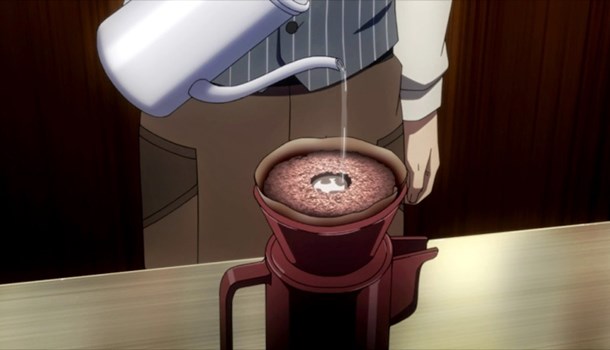 Written by Angelo Bacciarelli on 12 Dec 2020


Japan is well known for its tea culture. You would be mistaken to think that coffee isn’t as important as tea. However, coffee has integrated itself into every aspect of Japanese culture. There are coffee shops on every street, vending machines that serve coffee on every corner, coffee rice and even coffee in your anime. To the Japanese coffee is a way of life that melds artistic integrity with modernity. Come and join me in this article as I explore facts about coffee from cans to characters.

But before we delve into the world of coffee chemistry, we must know the origins of coffee and when it arrived on the shores of Japan. It is the late Edo period, pale-looking men from across the oceans have arrived in the southernmost province of Japan, Dejima Nagasaki. With their arrival, they bring a wealth of knowledge and items from western biological texts books to Arabic mathematics and African coffee. This was the first instance of coffee in Japan. Those who had the privilege to try coffee during the Edo period described it as an earthly and bitter taste. Something unknown and frankly quite unpleasant to citizens at the time. It would not be until the Meiji period did Japan’s love affair for coffee truly begin. Importing western ideals and technology came with the addition of western taste. And so coffee sprang forth, with countless cafes opening all across the island nation. Ever since then Japan has been gripped by the love the very berry coffee bean, leading it to become the fourth-largest coffee consumer in the world.

Japan’s coffee culture has developed a unique life of its own. Separate from the European basis of milk based drinks, the country leads the way in production methods and coffee culture. One of the most common world-renowned methods of brewing coffee is known as the pour-over method. When you see an anime character making coffee, the majority of the time they are using this method. What is a pour-over you may ask? It involves pouring hot water through coffee grounds in a filter. The water seeps through the channels slowly filtering into the carafe below. Delivering a rich but balanced brew, filled with aromatic complexities. 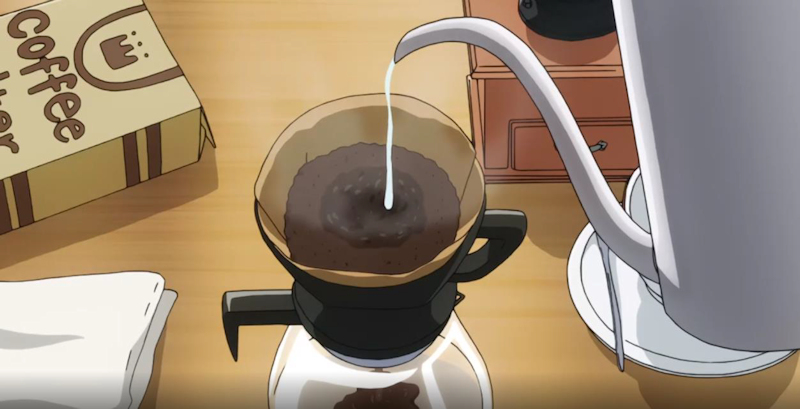 Pour over from Tokyo ghoul, Season 1 episode 3 where Ken Kaneki learns how to make coffee from Yoshimura

Pour-overs require an innate understanding of a variety of elements, from the water used, time taken and the beans. The patience and craftsmanship that goes into producing a batch is not lost on characters in anime either. As such it has become a character trait that embodies various characteristics. For example, Yoshimura from Tokyo ghoul is seen to be patient and understanding. Another example would be Alpha from Yokohama Kaidashi Kikou, who’s also patient and observant. The brew method is used to personify traits of characters, and therefore mature characters often make coffee. Regardless of the person, pour-over coffee has become a staple of Japan’s coffee culture as ingrained in anime. 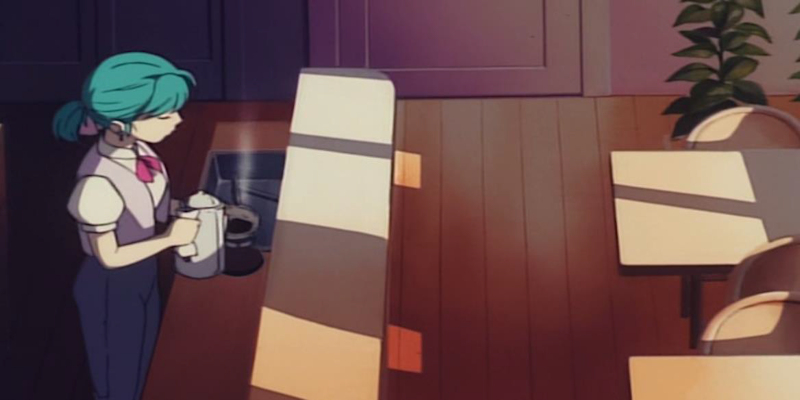 Persona has a long-standing tradition with coffee, from the Johnny Roger’s in Persona 2 to Café Le Blanc in Persona 5, it is a series that loves coffee. The fifth game takes it a step further by having you make coffee. While the protagonist learns how to make coffee using the pour-over method, what is interesting is the variety of coffee-making apparatus scattered around the café that doubles as your abode. In particular, the clinical looking instruments on the left are quite famous all over Japan. They are known as Siphon coffee makers or vacuum coffee. 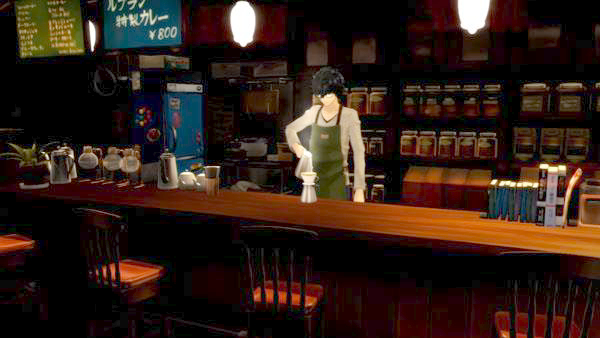 To the left of Joker you can see Siphon coffee apparatus. Joker himself is using a pour-over method. (Persona 5)

Siphon coffee makers operate on the principle of using two chambers where vapour pressure interacts with gravity to make the coffee. Heating the lower vessel changes the vapour pressure causing the water to flow up into the coffee. Cooling the coffee causes the water to fall back down into the lower chambers. Through this act of coffee chemistry, rich flavours are infused to create a drink that is not only flavourful but highly caffeinated too. 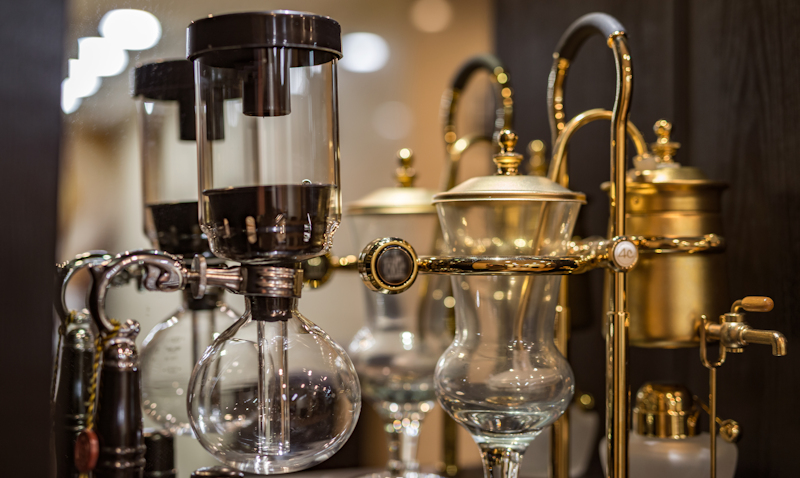 A coffee shop that specialises in siphon coffee

Characters that enjoy this type of coffee are seen to be eccentric and weathered. A good example of this Chihiro and Kondo from ‘After the Rain’. The siphon coffee is used as a vessel for character interaction to reminiscence about their university days. The brewer is used to contextualise their relationship and friendship, and could be argued that it is a metaphor as opposed to an object of story continuation. But what about the actual coffee in the show?

Do they use the siphon brewer correctly? Well you will be happy to know that during this scene much attention and detail is given to brewing coffee, and not a single fault can be found with their brew procedure. 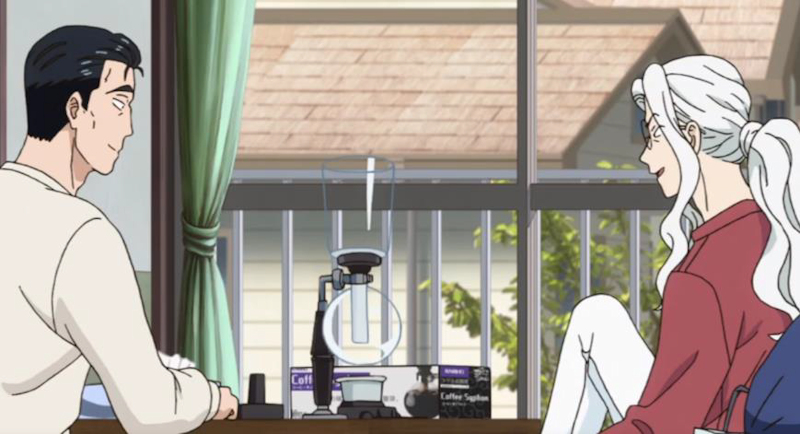 Chihiro and Kondo from After the Rain talk about Siphon coffee

Vending machines are everywhere in Japan. By now they are a common staple of Japanese anime, with character congregating around these machines. It’s well known that Japanese vending machines serve coffee, but what might come as a surprise is that these canned drinks are often warm. On the frigid streets of Tokyo during the winter chills, you will often see residents buy cans of coffee to act as a makeshift hand warmer. If you ever see a scene were a character coddles their coffee can this is the reason why. 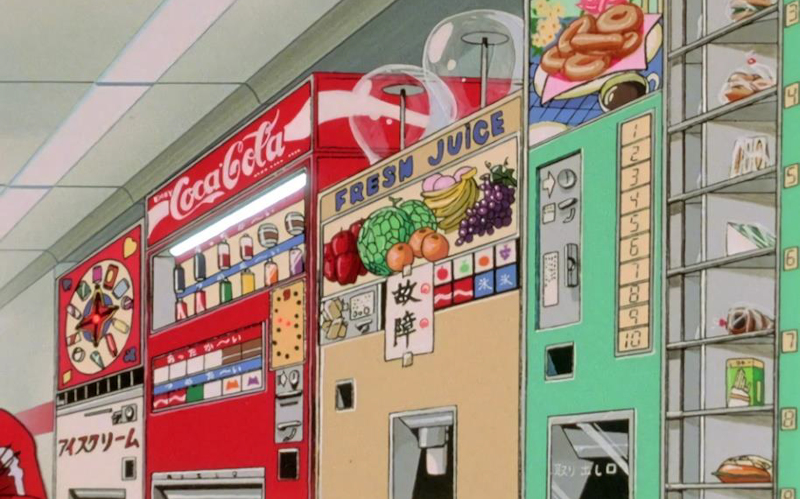 Classic vending machines from Diebuster. Canned coffee has been in production since 1983

Canned coffee is used to represent convenience and growth. Characters like Naoto from FLCL, try to secure their maturity by drinking canned caffeine. Other characters partaking in casual coffee culture may do so because of the convenience supplied by vending machines.

Naoto drinks a can of UCC black coffee. A well-known brand in Japan (FLCL)

For the sake of being coffee alone, these cans aren’t always the focus of the show yet their proliferation throughout the media has led to the notoriety and even boosted sales for these humble aluminium products. These pop culture cans come in all shapes and sizes, but their relation to anime doesn’t end on the screen. Collaboration between popular shows and coffee companies have led to a gatcha style approach. From Evangelion to one piece, these cans offer a lucrative opportunity for coffee and anime fanatics. Canned coffee collabs date back to 1997 with the infamously famed UCC Milk Coffer x Evangelion project. Since then various companies have tried to capture the attention of anime fans and coffee drinkers alike. With companies such as Georgia releasing cans that pay homage to shonen jump, Pokka coffee’s DBZ release or Attack on Titan’s collab with Asahi’s Wonda coffee. Some companies have even taken these cans a step further by offering an interactive experience. Dydo’s limited run of demon slayer coffee cans come with a scannable QR code. Once scanned you are greeted by the character that’s on your can with a unique voice line. 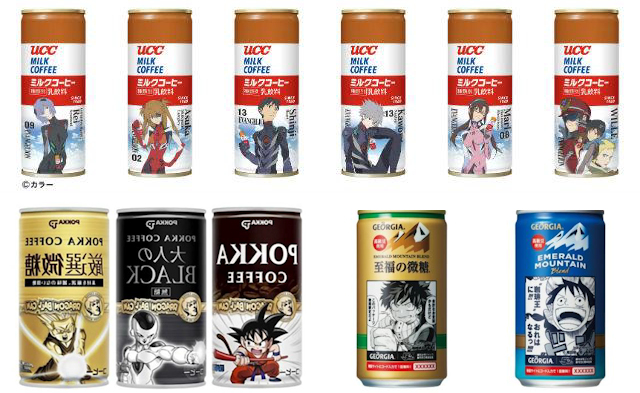 A collection of anime coffee cans

Coffee acts as more than just a vehicle for plot progression. Some shows centre their entire premise on the social interactions that come with coffee culture. Eve No Jikan is a contender for best café anime if there ever was one. In the not so distant future, androids are a common staple of society, however, they are treated as merely household appliances. It is not until Rikuo Sakisaka stumbles across the hidden café ‘Eve No Jikan’ that the barriers between humans and androids are eroded. 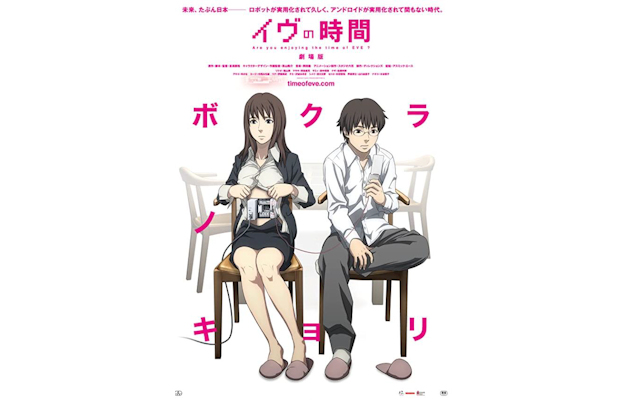 Japanese Poster for Eve No Jikan

This highly acclaimed show roots its message of acceptance and antidiscrimination through the interactions of the patrons. Without coffee let alone the café, the importance of accepting the bitter truth would be lost. Like the show, the Blu-ray Kickstarter blurred the lines of reality. Included for backers was a onetime production of coffee memorabilia that contained, a coffee cup& saucer, and a tin that included a bag of ‘Eveland coffee’ the very same that starred in the show. Not just a show anymore, Eve no Jikan shows the transient nature between the world’s most renowned caffeinated beverage and Japanese animation. 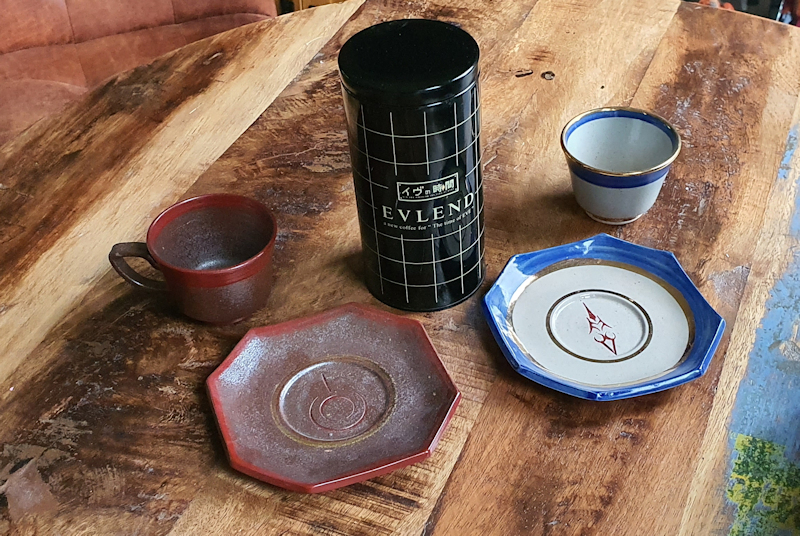 Anime Coffee Culture - the Evlend coffee as served in Time of Eve, flanked by a Fate Stay Night  cup and saucer set, offered in collaboration with Anime Japan 2015. They are fired in the traditional style of Shikoku's Ōtani pottery. This is the set that lives in our Editor's office!

Anime and coffee have a unique relationship. It inhabits a spectral point between consumerism, homage and visual storytelling. Like the characters that inhabit the shows, caffeine comes in abundance and in many forms. From the bitter to the sweet, coffee will continue to be a staple for both animators and character alike. 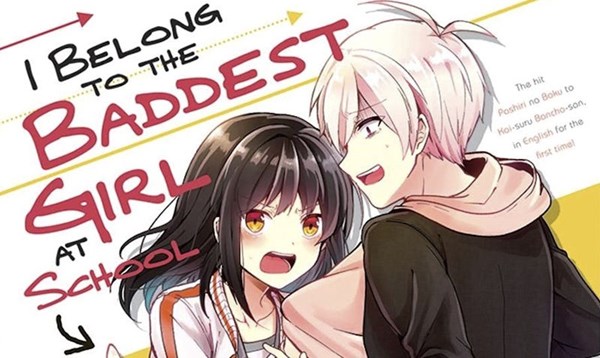 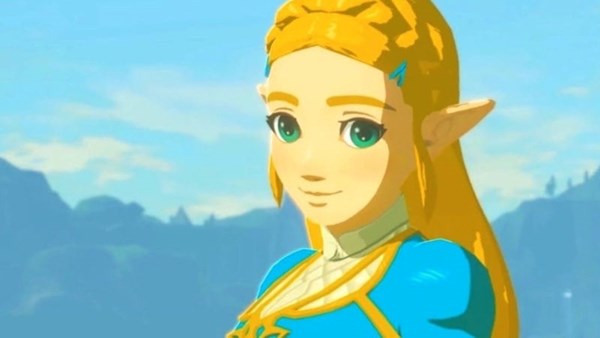 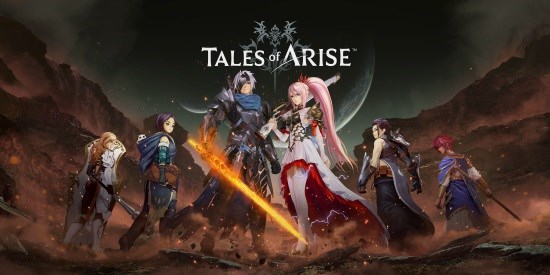