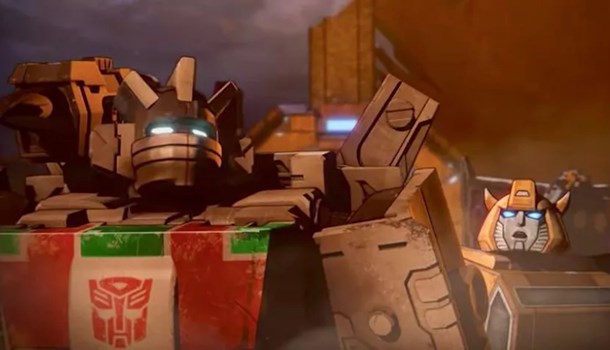 The first in a trilogy of series to come from streaming giant Netflix, Transformers War for Cybertron: Siege is a fascinating look at how the brand has evolved over the last 30+ years. In many ways, it brings The Tramsformers full circle, opening as it does with a CGI Bumblebee and Wheeljack looking for energon - exactly how the world was introduced to the "Robots in Disguise" way back in 1984.

I may have only been five years old when the series first appeared, but it hit me like a lightning bolt and I've been a fan ever since. However I'm not sure youngsters would feel the same about Siege, especially as it seems aimed at an older audience. The show is a very mixed bag, so let's try and take things one step at a time, with as few spoilers as possible, and see where we end up.

The most striking thing about the show is just how faithful the characters are to the recent War for Cybertron toys - every detail, hollow area and plug-in port is visible, which is a result of the show's creators using the original toy CAD files for reference. Those of us old enough to remember the original run will recall that many characters bore little resemblance to their toys - in particular popular characters like Ironhide, Brawn and even Megatron were matched by name and alt-mode only. This has lead to both Hasbro and third-party companies releasing numerous modern takes that try to marry the character on screen with a working toy, but here they are legitimately one and the same.

Unfortunately, such slavish adherence made comes with one major limitation. Some of the characters only have toys with Earth-based modes, so for those characters, they can't be shown transforming. Not such a problem for Spinister or Flywheels, who are just thugs, but for main characters such as Bumblebee and Wheeljack this is a real problem. At one point Bumblebee, Arcee and Cog jump into a transport rather than transform into their faster alt-modes to make a getaway. The very definitio of the brand is rendered moot due to budget constraints - it's a bit embarrassing, honestly. 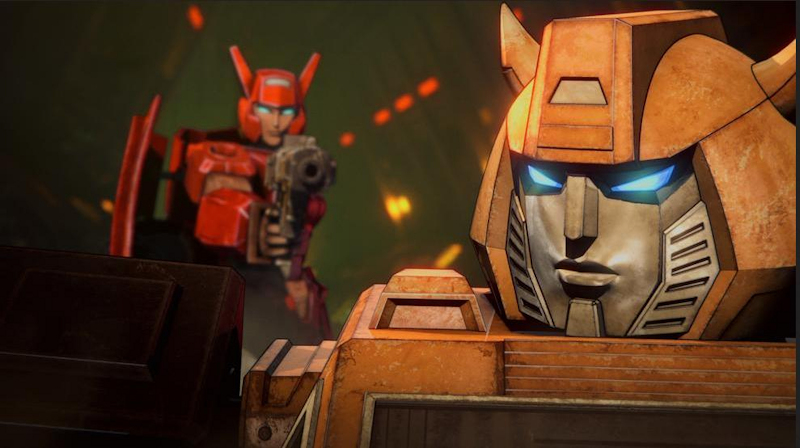 Bumblebee plays a far more neutral role - and has his voice back!

Anyway, while the recent toys have been largely excellent, they still make for occasionally clunky designs on-screen. Ultra Magnus in particular looks very impractical, but the show just about gets away with the stylistic choice. What doesn't work so well is the over-use of a limited set of character models for background characters - anyone not a leader (or high command) rank has a clone somewhere in the show, from the many Reflectors, Sideswipes, Mirages and Hounds to the myriad Decepticon Seeker repaints, there's a disturbing lack of variety - sometimes you can't even tell if a main character or one of their relatives has been killed as the series just isn't that clear. Certain fan-favourite characters are killed off in the show, some of which never get a chance to showcase their character or unique abilities, leading to the obvious question - why not just kill one of the copies instead and save the character for later?

Death is a major factor here - far from following the family-friendly '84 template with upgraded visuals, I was surprised at the body count. Some of the deaths were genuinely disturbing (one bot is ripped limb from limb), others just looked like toys falling over, but I was a little sad that the original CGI Transformers, Beast Wars, handled death with more nuance and emotion. I know this is a low point in the war, but if the characters on screen don't care, why should we?

On a more positive note, the show is presented in 4K Dolby Vision, which is a real treat. The original transforming sound-effects ground the series in its roots, and most, if not all, of the voice cast work well.

On that last point, Jake Foushee does well as Optimus Prime, often delivering a good Peter Cullen impression, other times providing a unique voice. Jason Manorcha's Megatron delivers slow and considered dialogue, which is fine but not outstanding. That said I was never a huge fan of Frank Welker's geriatric sounding version from the 80's, leaving David Kaye as the Megatron from Beast Wars to maintain the best delivery for a Decepticon leader to date. Ironhide sounded a bit young and Hound a bit too gruff, but standout performance was Frank Todaro's turn as Starscream - simultaneously whiny and full of lust for power. Pitch perfect. 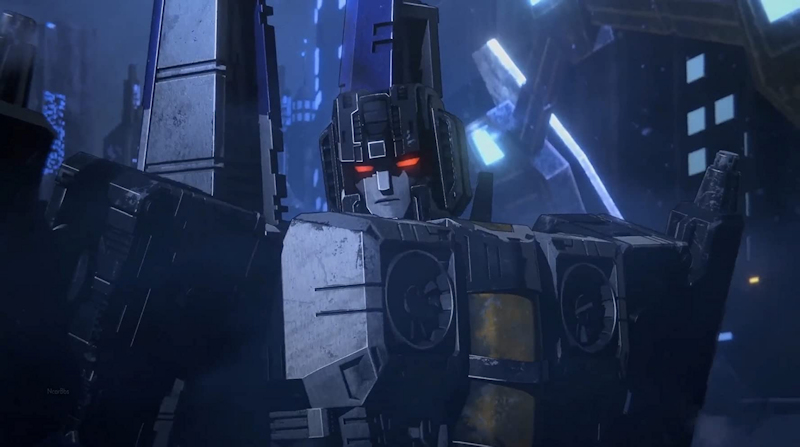 As you'd expect, there are LOADS of Seekers in WFC: Siege

As a war-torn and troubled world, Cybertron is a rather dark and dour place - there's certainly no sense of it being worth saving and I would have liked to have seen some flashbacks to the planet's golden age for a sense of what has been lost (just a matter of re-lighting the city models really) but instead we just have a lot of miserable characters pouting. I'll admit I got a grim laugh from watching Elita-1 constantly negging Optimus as almost every decision he makes proves to be an utter disaster. Honestly, there's no real sign of a romance despite the script suggesting one, and by the end of the show you get the impression that Optimus would probably be better off without her. Similarly, there are moments of humour, but they're played so straight that they end up falling flat. The lack of palpable emotion in the series is its biggest single issue - you could argue they're all so war-weary they just don't have it in them any more, but I wanted to see (some spoilers here) Prime rage with frustration when his pleas for aid from The Guardians are refused - instead he just drives back to base to look sad and pout some more, while getting scolded again by Elita-1. Poor bastard.

This is all sounding a bit negative, so let's look at more positives. There are some solid set-pieces scattered throughout the show, with a few battles that have a genuine sense of urgency and spectacle about them, animation is generally pretty good and direction keeps things pretty clear. The storyline is straightforward enough, with a few plot-twists that keep you guessing, but it never feels particularly epic or appealing.

Much of this I actually put down to the score, which is incredibly bland. The show really needed some energy injecting into it, along the lines of the '86 movie. Ironically I was listening to the new release by SawanoHiroyuki[nZk] today and thinking how much it could have added to the show.

By the end of the series, the scene is set for Earthrise, the next chapter in the Transformers saga. 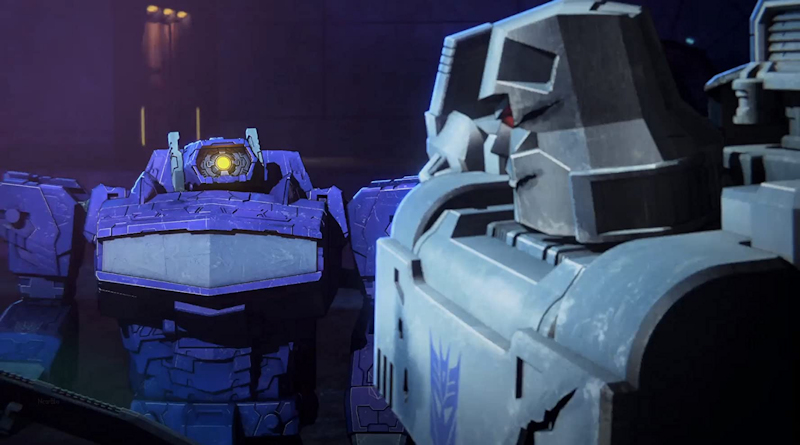 Sadly the OG Shockwave is far less frightening than his Transformers: Prime counterpart

I genuinely enjoyed much of what was on offer with the show - the gritty take, the choice of characters, the callbacks - but it's also a deeply flawed enterprise. The budget really wasn't high enough, especially for character models. Making all the characters completely generic (and therefore robbing them of any real individuality) was a monumental error, as it does a huge disservice to world-building being attempted. Why should I care if a character dies when there's tens (if not hundreds or thousands) of other characters who look identical? It also makes the world seem much smaller, diminishing the majesty of Cybertron and its inhabitants.

In the end, this is a fairly charmless exercise, which is a massive shame because I wanted to love this series. The toys are absolutely fantastic, possibly the best they've ever been, and a genuinely good cartoon to back them would have been wonderful. Sadly this is just a bland attempt peppered with good moments, but never having enough character to be memorable or truly engaging. It does at least try and take the subject matter seriously and inject gravity, it just does it with little wit or personality.

With Earthrise pulling the same trick as Beast Wars and limiting the cast stuck on Earth, many of the issues may be addressed. Give some life to the scripts, really develop the characters and we could have something special, but until then, this is little more than a toy commercial, but one where the product is actually better than the advertisement.

6
Sadly we are still waiting for a definitive modern take on the original Transformers mythos.