The Girl in Twilight

The Girl in Twilight (Akanesasu Shoujo) is a show that really surprised me, but left me somewhat conflicted as a result. It’s an original series, created as part of the 20th anniversary celebration of Japan’s Animax network, and comes from a concept proposed by Kotaro Uchikoshi, who you may know as the writer of Punch Line. Given its role in Animax’s celebrations, it’s a show without any history or heritage - it’s simply a one-off and seemingly had no intention of creating a second series. What I find so conflicting, though, is that, while it’s certainly a fun and visually refined spectacle, it never quite steps beyond its safe and shallow waters. Rather, it almost needs a second series - or simply more episodes - to flesh-out and realise the full potential of Uchikoshi’s concept. Unfortunately, that’s something we’ll probably never get.

The setting for the show is a world just like our own. Five high school girls, from the fictional Japanese city of Akeyuki, are part of the Crystal Radio Club and use it as a thinly veiled way of researching a rather intriguing occult ritual; every clear day at 4:44pm, the five go to the temple tree on top of a hill, tune their radio to a different frequency, and pray in an attempt to open a door to another world. Unsurprisingly, one day it works, and this leads to a series of adventures that help the group to better understand themselves and each other in the face of a far bigger existential threat.

The group itself is made of up of some rather fun characters. You have Asuka Tsuchimiya, the peppy and energetic soul of the club, and Yuu Tonaka, her scholarly and reserved childhood friend, and it’s around both of these that the deeper elements of the show’s story revolve. In addition, we have the timid Mia Silverstone, the outspoken Nana Nanase and the studious Chloe Morisu, who each serve to structure the show’s mini-arcs. Having this spectrum of personalities isn’t anything new; with shows like Love Live, the conflicts and contrasts between all of the characters usually serve to individualise them while also spurning a lot of personal growth. 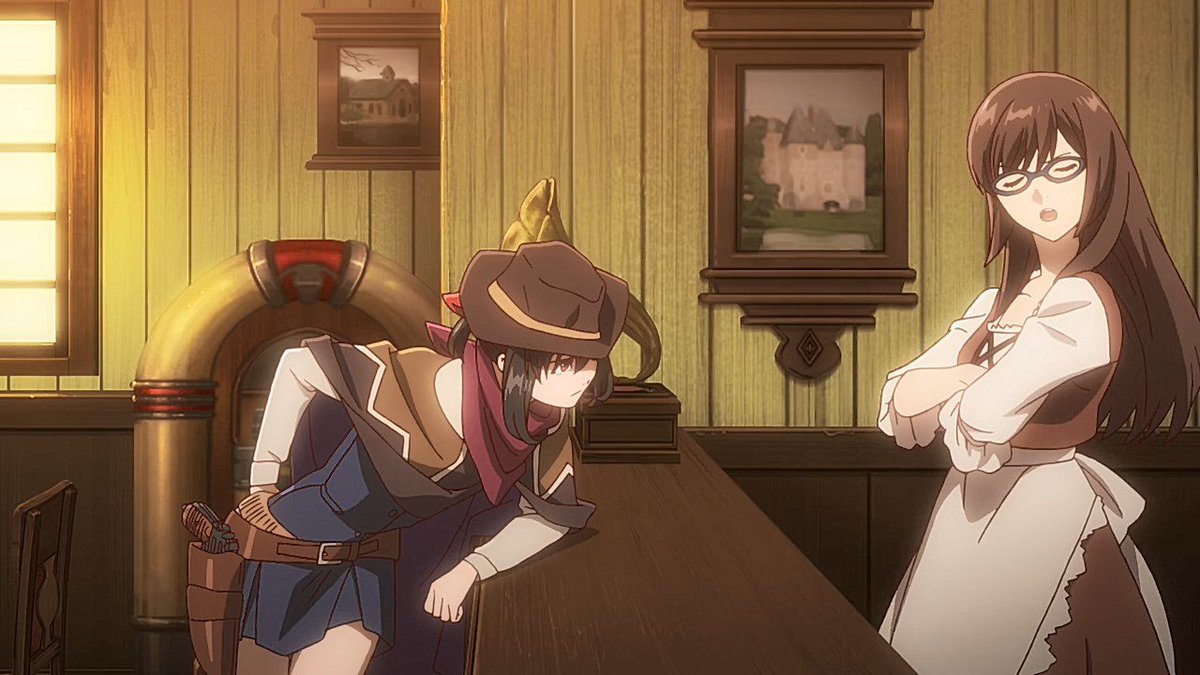 However, we sadly don’t get as much playoff between each of the characters in The Girl in Twilight as I would have liked to have seen. That’s because, for the latter three characters - Mia, Nana and Chloe - their development is far more introspective and almost solely takes place in response to the challenges they alone face. However, later on with Asuka and Yuu, we see how both characters and their shared history help to fuel their development, and it’s far more interesting to witness that dynamic at play and the far more meaningful bonds that develop from it. In essence, some of the character development, while great, feels as though it was a little too passive and it could have been developed a bit better by consistently utilising the colourful cast we have.

The major driver for character development, though, is the universe the show presents. The girls don’t visit other worlds, per sei, but rather other realities. Over the course of several arcs, compressed into a handful of episodes each, the group travels to other versions of our world. However, one of the girls always serves as a link between their own universe and the new one, and this causes them to inhabit the body of their alternate selves and to confront the new realities that this brings. It’s this process that forces each girl to come to terms with their own insecurities and take control of their own destiny in a manner that they shied away from before.

Now, again, this idea of using alternate realities for character development is nothing new, and that could in fact be a byline for this show - it’s fun but familiar. However, it’s a really intriguing plot device, not least because it gives each girl who is not the link the opportunity to also confront their alternate selves face-to-face. This is a big element of Asuka’s and Yuu’s stories, as their alternate selves are presented as major characters is this narrative, but it’s never given - or rather simply doesn’t have - the time to play out with our other characters. Instead, each adventure into a new reality is heavily focussed on the link’s development at the cost of all else, and I think a real trick was missed there. If the show was even a few episodes longer, then each arc could have seen all of the characters grow together in a far more organic and layered way.

In a sense, that missed opportunity is what hits me the hardest with The Girl in Twilight; it deserved to be given a longer run that would have seen a better-paced and interlinked series of arcs lead to far more satisfying conclusions. Don’t get me wrong, it’s still an interesting and well-meant series, but it’s far too constricted by its episode length, grasping for interesting possibilities that it can’t quite reach as a result.

That all said, the series shines when it comes to celebrating impressive animation and never more so than with the battles at the climax of each arc. The girls’ desire to become more confident and take command of their own lives leads each of them to confront the subject of their insecurities, culminating in a very much Persona-esque fight scene. Now, I’ve never been quite convinced of computer-generated animation in traditionally animated shows, since I often find it jarringly clunky and distracting at the best of times. However, here, it really is quite exceptional; Dandelion Animation Studio have demonstrated a great awareness of their art by simply using CG to emphasise the supernatural moments of combat, and doing so in a way that is smooth and bombastic in equal measure.

Another standout aspect of this series are the performances they’ve chosen for its opening and closing theme songs. Soranetarium, performed by Michi, stands out thanks to its hard acoustic beats and choir elements, which offer quite a nice tonal shift away from your more run-of-the-mill anime openings. In addition, it confidently shifts the tempo throughout the piece, offering the far more textured performance that the show could have presented if it too had the room to adapt its pacing.

In quite a stark contrast, the closing piece, Kowarekake no Radio (or ‘Broken Radio’), is covered by Ami Wajima and both beautifully and gently reminisces on how the songs on our radios often guide us when we don’t know where life is taking us. It’s a concept the show echoes quite thoughtfully and directly, begging the question of whether it, in fact, served as the whole inspiration for the show in the first place. Whether it did or didn’t, it’s a touching reflection of one of the show’s core messages - sometimes it’s the words of others, not our own, that help us to find our way.

The Girl in Twilight is a show that I really did enjoy; it’s sweet while short, entertaining and far more interesting than it may seem at face value. However, for all its strengths - particularly its CG animation - it falters slightly under the shadow of what it could have been had it had more time to develop the emotional connections of its characters and the mysticism of its setting. Sadly, we probably will never get that, not beyond its free-to-play mobile game at least. And yet, with all of that said, it remains a fun and well-spirited series, and something I can recommend you tune into.

6
The Girl in Twilight is certainly sweet while short, entertaining and far more interesting than it may seem at face value. However, for all its strengths - particularly its CG animation - it falters slightly under the shadow of what it could have been had it had more time to develop the emotional connections of its characters and the mysticism of its setting.
COMMENT AND DISCUSS
blog comments powered by Disqus