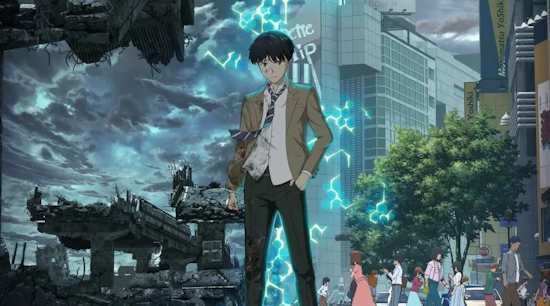 Another Netflix Original Anime, Revisions is a time-travel mecha romp that sees the Shibuya district displaced to a desolate future. Under attack from the Revisions, an enemy that employs devastating weaponry to capture the populace for unknown reasons, serial white-knight Daisuke chases his destiny to protect those around him - but is he really the hero he thinks he is?

Opening with a kidnapping scene from 7 years prior, a young Daisuke is told of his destiny to protect everyone by his pink-haired saviour, a young woman named Milo. Carrying this knowledge (and sharing it with anyone who will listen) Daisuke rows into an obnoxious and largely unlikable young man who somehow maintains a the same group of patient friends he grew up with.

So when destiny finally rips his hometown out of time, he's delighted. However, his chance to become a hero is dealt a severe blow as his school is attacked in a shockingly violent scene that sees fellow pupils massacred, or jumping to their deaths trying to escape the carnage. It's a truly horrific opening episode that ends with Daisuke crawling into a mech provided by the same Milo he met in the past - and from here, we're plunged into 11 more episodes of time-travel and dubious prophecy.

Director Gorō Taniguchi lends a sure hand to this kinetic new series, and no surprise given his outstanding pedigree in Sci-Fi series - Planetes, Code Geass and Infinite Ryvius have all seen the benefit of his direction. While the initial episode is a terrific hook, the rest of the season takes a slightly more leisurely approach in moving things forward, which is no bad thing here. There's still plenty of action, but what I really liked was the time taken to deal with the real-world politics and troubles such an event would have on a peaceful populace suddenly fighting for survival.

There are civilian power-struggles between local government and the police, with power structures straining to control the chaos. The idea of 5 kids protecting the city is also subject to scrutiny, and its a testament to the series that it fits in as much as it does in just 12 episodes.

Milo is both engaging and infuriating, the way in which she drip feeds information often seems more for purposes of plot exposition than genuine limitations imposed by the agency she works for, but there's no denying she's a strong female lead. Daisuke's classmates are pretty cookie-cutter and don't have much in the way of personality beyond the tropes they represent, which is a shame because they need to level out Daisuke's oft-irritating personality.

There are elements that don't quite work - the Deus Ex Machina events are eye-rolling in places, and the ending has the sort of spiritual open-endedness that leaves doors open just enough to bring characters back when a more final ending would have satisfied more. As it is, the show leaves on a note that suggests a sequel should audience numbers justify the investment.

Animation is of the computer-generated variety, but it's a method that's steadily improving over time, and it actually works quite well here. There are a few moments when the characters look too much like marionettes, but the mecha action is well suited to it and the show can easily go toe-to-toe with titles like Rooster Teeth's Gen:Lock, even without the star casting.

Overall the show is a solid, character-driven piece that entertains for the full duration of its run-time. It isn't high-art and it won't be winning any awards for originality, but the stylish execution, fantastic soundtrack (opener is by The Oral Cigarettes and well worth a listen) and smart direction make this a series an entertaining, if ultimately forgettable, jaunt. Just strap in and enjoy the ride.

7
Well directed with some killer scenes, the overall show falls into predictable tropes, with occasional moments of brilliance. An uneven, but occasionally wild ride.
COMMENT AND DISCUSS
blog comments powered by Disqus