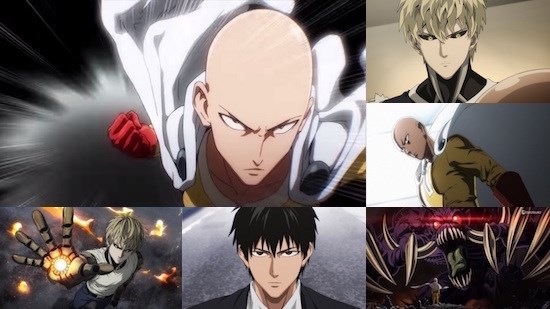 One Punch Man is a series that has found itself buoyed by a great deal of hype, not least from our very own Elliot Page, UK Anime Network’s resident Podcast maestro. Elliot has waxed lyrical about the franchise on numerous occasions, and more widely it has been so heavily hyped that the series really stands no chance of living up to said hype... or does it?

One Punch Man sets about its business with almost military precision. The series opens with images of a perfectly normal looking city and a glimpse of people going about their daily lives. A brief scene, no more than 20 seconds in duration, but just enough to tell you everything you need to know about the setting of One Punch Man. Then bang, an explosion, and the opening episode bursts to life as a blueish creature of alien appearance attacks City A. There is widespread panic, an unnamed organisation dispatches heroes to the site of the attack, then the scene cuts to the heroes lying defeated as another explosion booms in the background. We cut again to a panicked news broadcast, the screen pans out to a man watching TV. He speaks - “Guess I’ll go” - and heads out for battle...

Those first few minutes running up to the show’s opening credits almost perfectly encapsulate everything that is One Punch Man. The titular One Punch Man, or Saitama as he likes to be known, is a hero of sorts. Much like many of the shōnen protagonists that have come before him Saitama gives the appearance that he does what he does just for the sheer hell of it, often proclaiming to be “a hero for fun” - although since undergoing three years of intense training he now finds himself in the position of being so strong that no opponent poses a challenge for him, so much so that one punch is all it takes to defeat any opponent. Thus Saitama is increasingly finding that all the fun is gone from being a hero. Thankfully for him things are beginning to get more interesting, first by the arrival of an “apprentice”, then a host of new enemies, and eventually in the fourth episode a determined new rival joins the fray.

Though the premise is a simple one, everything here is handled with a care and precision that belies that simplicity. The animation is used delightfully to emphasise the mood on screen, ranging from wonderfully detailed to simple, almost bare bones, at times. Similarly the soundtrack punctuates the action perfectly. This all adds up to a feeling that every little detail in every single frame is there for a purpose, and that this is in every sense a top-tier treatment of the source material.

With that in mind it’s time to turn our attention of the material itself: So far at least the story of One Punch Man is a fun little romp, where big doses of comedy and action are scattered about liberally throughout these opening episodes. This is a series that will almost certainly keep you entertained. However, while it is amusing for the most part the comedy isn’t laugh out loud funny, and is more akin to slightly childish snickering at times. The action is also top notch but often necessarily brief, as the series’ title might suggest, though Saitama’s almost Zen-like indifference is just enough to keep the battles (in so much as you can call them battles) interesting and prevents them from being over too soon, as well as providing some of the best comedy moments of these early episodes.

Thus far One Punch Man does not seem to be the genre defining epoch of anime that some claim it to be. However, it is nevertheless a very entertaining series that doesn’t take itself too seriously except where it really matters - in it's execution. In short the series provides everything you could hope for from a parody of the archetypal overpowered shonen protagonist.

8
An entertaining series that doesn’t take itself too seriously. Everything you could ask for from a parody of the archetypal overpowered shonen protagonist.
LATEST REVIEWS