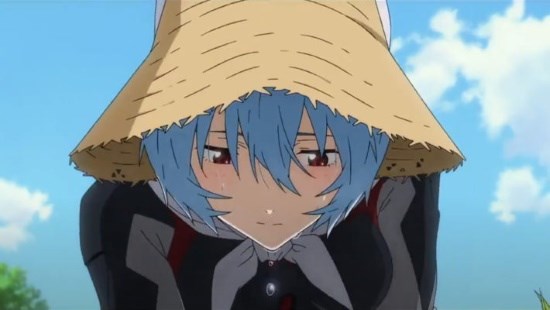 ….Well, how on Earth did you think it was going to end?!

It’s finally here! After a troubled production history involving re-writes, health issues, delays, title changes and who knows what other problems, the fourth film in the Rebuild of Evangelion series is finally here a whopping 9 YEARS after part three hit Japanese cinemas. So let’s all take a moment to be thankful to Mr Amazon for making the Western release happen a mere 5 months after the Japanese one, a release strategy that one can only hope becomes the norm. Yes, festival events like Scotland Loves Anime would lose out, but that would be a small price to pay for allowing content to reach a mass audience this quickly instead of limiting it to a few hundred at a festival with a small cinema.

But anyway, the film is here and we can only wonder if it will live up to it’s own hype? If it will answer any of the big questions left by the previous incarnations of the story? If the story will finally address the really dodgy aspects of it’s relationships?

The mammoth 2 and a half hour film opens with the most explicit acknowledgement of it’s own delay you could expect in the form of a several minute recap of events from the last three films. From then on, the film assumes that you are fully aware of what happened in those films and dives into the story, so good luck!

There are two storylines running through the first half of the film. Misato and WILLE assault a former NERV facility under Paris to get parts to resupply their ship and rebuild Unit 2. Meanwhile Shinji, Rei and Asuka wind up in a remote mountain village along with their former school mates. It’s difficult to discuss the story in too much detail without going into spoiler territory, but suffice to say that things build pretty much as you might expect until it’s time for the big action climax and then some full-on Hideaki Anno-isms.

The main issue that Thrice Upon A Time has the vast weight of the expectations that have been placed upon it. Heck, even if the film hadn’t had the original series and End of Evangelion to live up to, the fact that it's taken nine years to come out, to finish a film series that began in 2007 would have been enough to pile on expectations. Given that, whilst watching the film and writing this review, I can't help but see the parallels to The Phantom Menace…

Against all this, the film really struggles to satisfy, though you do wonder if this is Anno’s way of raising an even bigger middle finger to the fans than End of Evangelion allegedly was….

What are the problems? Well, the script and story just really aren't well conceived, and to put it bluntly, don’t work. Whilst various individual scenes are fine, it doesn’t really mesh together and is full of examples of really lazy writing. There are masses of instances where characters just monologue about the plot as they try to explain how things just conveniently happen. Characters are somehow able to have predicted totally unpredictable events, or are revealed to be able to do all sorts of stunts which they never seem to have attempted before but somehow know how to do perfectly. Events occur immediately after they are foreshadowed, allowing no time for any suspense or build up, with technobabble and religious phrases thrown about wherever possible to try and distract from the problems - it's like a harried magician’s assistant flashing some leg so the audience doesn’t notice the magician has dropped the cards all over the floor.

Other than Shinji and Rei, no time is spent fleshing out any of the characters. Where they are shown, they often flit between different personalities, as if different versions of the script had been mashed together at random. There’s a moment where it’s implied that Asuka and Mari might have a romantic relationship, but it’s never a thing again. Another character hates Shinji and is going to kill him but then just doesn’t because of... no apparent reason.

The issues don’t really stop there sadly. The Rebuild series has made a lot of use of CGI thus far, but in this final film they really went all in and it just doesn’t do the film any favours at all. There’s no weight to anything as the swarms of mecha and ships clash. The fact that almost everything is done with ariel combat means that it’s very difficult to understand the geography of the action and the fact that everything is so over-designed makes things all the more confusing. There may be more things on the screen, bigger and brighter explosions and more cash being spent, but nothing is half as good, or impactful as Asuka vs the Eva series back in End of Evangelion, which is still arguably the best mecha action sequence put to film. They can’t even manage to come close to the action sequences from 2.22.

As for the ending...Well, without giving anything away... yes there is one. It sort of makes sense, though it heavily relies on the audience to fill in the blanks and like so much of the rest of the film feels like they took ideas from different versions of the script and tried to staple them all together. At this point it's hard to say just what a satisfying ending to Evangelion would be, but it's certainly not this. It's also up in the air as to how much of a definitive ending this will turn out to be given that Anno has suggested that he intends to allow other people to make content using the world and characters of Evangelion, but there you go.

The only true high points of the film come in the form of the character design and traditionally styled animation, which remain absolutely superb throughout, aided by an incredibly strong soundtrack. It would be nice if there was more good things to say but at least there's this much!

Nobody wants to write a negative review of this film, but it's hard to see it as anything other than a massive disappointment. One can only really wonder about what the original versions of the third and fourth films would have been like had the issues that derailed the project not arisen. Perhaps one day we’ll get to see the scripts and animation that were produced for them. Certainly the third film was originally a more direct sequel to the second by the looks of the preview, and the original fourth film looked set to be a more intense action film with it’s hybrid Eva design (which has even been produced as a figure). Like so many film production stories we’ll probably never know and what we’re left with is Thrice Upon A Time, which won’t be flying us to the moon any time soon.

4
A film that took 9 years to make feels incredibly rushed.