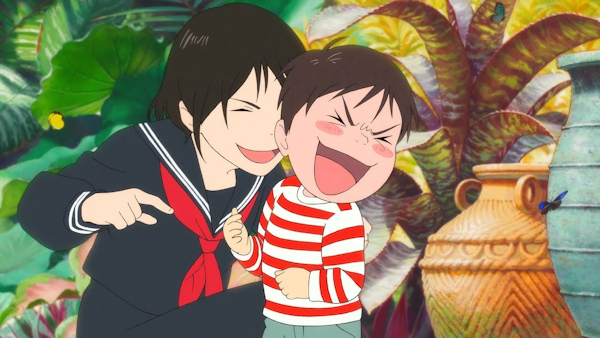 Mirai is the story of a young boy named Kun, who is struggling to come to terms with his newborn baby sister, Mirai. Thanks to Kun's fanciful imagination sparked by the tree that sits in the middle of the family's unusual home, he meets both a human version of his dog, an older version of the titular Mirai herself, who visits to try and stop her father cursing her into spinsterhood. During the course of the film, the young lad is transported through time to meet his family at varying stages of their development and learns to become a more tolerant and caring big brother.

When Seb reviewed Mirai's theatrical release, he mentioned that the film had failed to connect with audiences, and I can see why. The mother is a bit of a snarky pain in the backside, the father an un-charismatic dork and Kun a particularly nasty little brat who thinks its funny to assault his baby sister with a toy train. Nominated for an Oscar for Best Animated Feature in 2019, I suppose the film's production values made it viable, but on a dramatic level I fail to see the allure. Director Mamoru Hosoda's earlier works, The Girl Who Leapt Through Time and Wolf Children are vastly superior in terms of craftsmanship and empathy.

While there are moments of charm in this film, with the family dog Yukko providing some of the comedy, the human characters are mostly hard to get behind. It's difficult to watch a film this long when not one of the characters comes across as remotely appealing, and this is really where the film is going to struggle - its a tale of familial balance told from a child's perspective, but even allowing for a bit of drama to carry the story along, 2 hours with Kun was enough for me and subsequently I doubt I'll ever be visiting again. I've lived with a 1 year-old who had issues, but Kun is another level of annoying.

The film has some fans, and there is much to be positive about in the animation and direction departments. It is a lavish film, with great animation and some beautiful scenes, but whether it was my copy or not, the animation juddered on panning shots ruining some of the most detailed scenery.

You could argue deeper themes and subtlety drive the film towards the Academy Awards, but despite looking I really couldn't find much of any value to really latch onto. Kun's mother is just like her son at a young age which is a neat idea but ultimately goes nowhere, the idea that Kun would suggest baby names all related to trains is a cute idea, and the film peppers inventive moments throughout it's runtime, but ultimately I found myself distant from the family and their problems.

All the fantasy elements are supposed to be in Kun's head, but they fail to convincingly relay the thoughts of a child, being overly complex and downright bizarre in equal measure - the messages are lost because none of the lessons ever really land convincingly. The film's conclusion, that we're all a mix of our forebears, is probably the best 15 minutes of the film, but emotionally it didn't really work for me given my irritation at the characters portrayed on-screen.

The home release is of the bare-bones sort - no version of the film contains a single extra, so you can buy the Blu Ray, the DVD, or pay an extra tenner for a nice box with both, but all you'll get is the film. When the meat of the release fails to impress, All the Anime's offering becomes a pretty limp release overall. I had hoped the Oscar nomination would have provided a spur for some extra material, but no such luck here. This is a shame as I'd have enjoyed learning about Hosoda's creative process even if the film itself wasn't to my tastes.

In summary, the best I could suggest with this title would be a rental, and unless you are especially enamoured with the film (and some of you may be, each to their own) the Collector's Edition is particularly hollow and disappointing, certainly not worth the extra money.

It's a real shame as I wanted to like this film, having seen overwhelmingly positive reviews on theatrical release, and I requested it especially from the review pile, but after an hour with Mirai I was watching the clock. When the end came, only relief and disappointment lingered.

5
A largely unlikable cast of characters in a well-directed and beautifully animated film make for a hollow and unsatisfying experience overall.
COMMENT AND DISCUSS
blog comments powered by Disqus