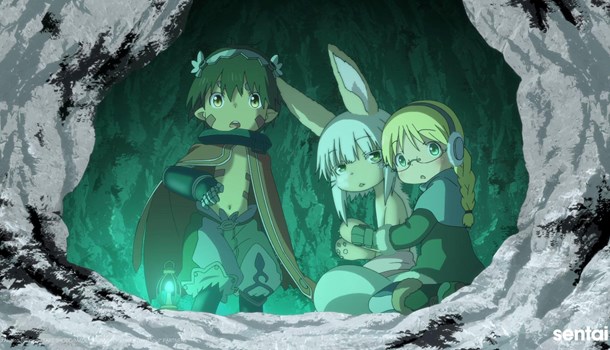 When I returned from one of my anime lulls several years ago three MVM releases really resonated with me: Land of the Lustrous (why no second series?), Flip Flappers (perfect as a standalone series) and Made in Abyss. Each series was surprising in its own unique way and each exemplified why anime can be so fascinating. So I was happy to see the film Made in Abyss: Dawn of the Deep Soul was getting a release and would be followed up with a second series.

Like Madoka, Dawn of the Deep Soul is actually the third film and like Madoka the first two are recap films. The key difference though is that the first two Madoka films have a self-contained story to tell, so the third film, Rebellion was free to create a new story and function as a distinct entity. Dawn of the Deep Soul cannot, as the first series of Made in Abyss was clearly awaiting a continuation to its story, which makes this filma little hamstrung right from the off. If this seems obvious I say it because Dawn of the Deep Soul just dives in. This is not necessarily a bad thing but it means the film doesn’t have a natural starting point; rather as it begins it immediately feels like the continuation of a thing and it’s an oddly jarring way to start a film. It also means that if you’ve never seen the first series, don’t even try and approach Dawn of the Deep Soul. I mean, two minutes in and had to remind myself of some of the key events from the series. I’ve watched so much other anime since that I needed a reminder on a couple of things. My brain can only hold so much and that “so much” should be read as “a very limited amount at best”!

The film continues the story of Riko, a child of a Cave Raider in search of her mother, who alongside Reg, an amnesiac human shaped robot, and Nanachi, a hollow once-child, as they continue their journey through the Abyss, descending to the fifth layer and seeking entrance to the sixth, from which no one can return. Because to ascend even a step up from any layer of the Abyss incurs the curse of the abyss and the lower you go the worse the curse gets. Only Bondrewd, an immoral Cave Raider, blocks their paths and has other plans for the three of them… seeking a blessing not a curse.

As a continuation of the Made in Abyss series, Dawn of the Deep Soul is different in how it is far more focussed on how our three protagonists approach the gate to the sixth layer (oh and Bondrewd manages this gate) and also their relationship with his daughter, Prushka; whereas the series feels more picaresque the film contains itself to a clear purpose: can Riko and her friends gain entry to the sixth layer? And what will they have to give up to make it through if they even can? So in terms of the flow of the story in general it is a little different, nevertheless what is unchanged is its ability to take dark turns. Those unacquainted with Made in Abyss may be disarmed to realise that despite its chibi character design the story is frequently undercut by darkly disturbing turns of events. Dawn of the Deep Soul in no way steps away from this tradition and that is in the film’s favour as the mixture of optimism and humanity along with their counterparts are what makes Made in Abyss work so beautifully well. At one moment in the series, Riko, almost absurdly optimistic and gungo-ho at times, is hit with the curse of abyss, causing her to bleed from every orifice and it's viscerally unnerving. It reminds the audience that travelling the in Abyss has ramifications and Dawn of the Deep Soul delivers similar moments and with similar immediacy, including one that felt like one of the more disturbing scenes in Robocop 2. No, the film never stkimps on darkness nor its humanity, but it doesn’t always quite deliver.

If the film has a fault it is that the series allowed itself to be paced in quite a free-flowing manner, yet the film feels constrained in needing to hit dramatic beats within a 110 minute window so that the the film can sometimes jolt ahead, like some of the story has been lost on the cutting room floor. It’s rare, but it’s in stark contrast to the flow and feel of the series, making it feel perhaps less than its episodic animated partner. The same applies for the need to have one or two more extended action sequences that neglect that the series’ main strengths is in the dynamics of its characters. Action for action's sake is not intrinsically interesting. So the film can struggle to really balance the emotional impact of what happens to our characters with the need to create a cinematic experience. And the characters are strong, they always have been. So there is no need to cater to anything else as the character dynamics will carry the audience through whatever story is to be told. 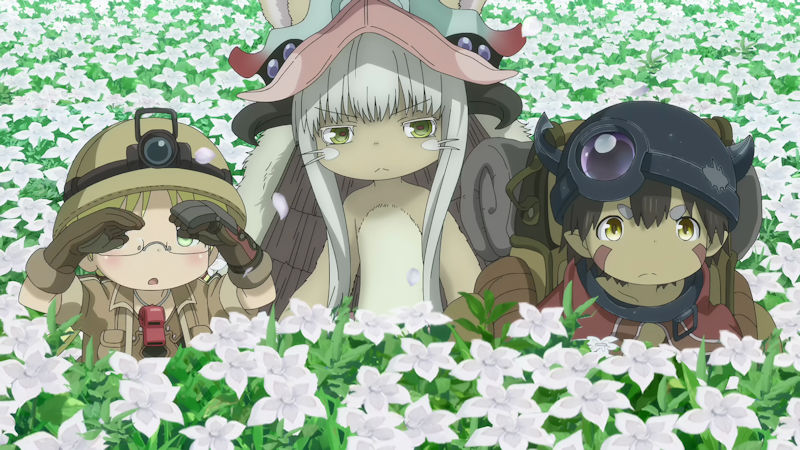 Danger can hide in the most unusual of places for Riko, Nanachi and Reg

That said, the introduction of Prushka is a neat step even if early on you think you understand her place in the narrative. Her story arc feels inevitable even if her final place in the story certainly took me by surprise and perfectly fits into the hope-darkness equation and is suitably morally grey. Prushka is an engaging character and draws out the innate good natures of Riko and Reg especially. Where the film is less successful is with Bondrewd, because in short bursts as an antagonist he’s fine. In the film he’s two-dimensional, more like a necessary gatekeeper than anything else. He claps a lot in a patronising manner so you oft want to slap him senseless for being a condescending arse more than anything else. Then again do we really care about Bondrewd?

It's the main trio that we care about thanks to the hard work of the first series allowing us to fully understand what is spurring them on. Thankfully there are no liberties taken with their characterisation, no attempt to suddenly change who they are. They do grow a little by the end of the film and a little is all that they should grow, after all the next series will continue their story. And so, Dawn of the Deep Soul is no more than a soft light rising over the horizon rather than blazing sunshine. That itself could be a problem depending upon how you see it: does Dawn of the Deep Soul adequately function as a standalone film or do you not care? For myself, I'm with the "don’t care" brigade. My rationale, flimsy or otherwise, is that this is not a film intended for someone who hasn’t seen the original series or the two recap films. Its tone is on the money, the characterisations are consistent and it means we’re perhaps a little closer to understanding the mystery of Reg and whatever has happened to Riko’s mother.

Being a cinematic film, even if I watched it sat on the sofa on the TV you expect the animation to be a step above the norm. It was perhaps a touch smoother but to be honest the animation in the TV series is quite sharp and really it’s more about the design of the Abyss that matters to me; that and the focus on the characters and so they all felt consistent with the first series made the most impact. True, Reg’s sudden electricity soaked assault definitely felt like more time and effort went into the animation than the series could have provided, and the action more kinetic, but as already evident the action moments were for me the least interesting except where they illustrated how our protagonists engaged with one another or helped us to understand them a little more as individuals.

In the series its the environment that's the antagonist and perhaps that is the film’s biggest problem. Bondrewd was always a threat in the series (and definitely Nanachi’s nemesis) but here becomes the main antagonist, whereas in the series threats come from all angles: people, the unknown, the Abyss – especially the Abyss. And often these elements of continued danger and the need for resolve are what drew out the most from the characters in the series.

At least the design of the Abyss, with its mixture of beauty and risk, is just as magnificently realised in the film as in the series, even if its menace comes mainly in slender moments, or else its dangers are actually used by our protagonists, showing how they themsleves have grown to understand and sometimes use the Abyss to their benefit.

Like any film or series that continues a story you enjoy immensely, you want what comes after it to match what went before (I’m yet to see the final instalment of Evangelion, damn my ban on all things Amazon!) and Dawn of the Deep Soul cannot quite match the series. There is something about the ebb and flow of the series that in film format just cannot be matched and you know my thoughts on Bondrewd, nevertheless there's a huge amount to enjoy in Dawn of the Deep Soul, just as there are moments to find appropriately disturbing, and so I am grateful to the film for allowing me entry once more into the Abyss. I look forward to the second series. 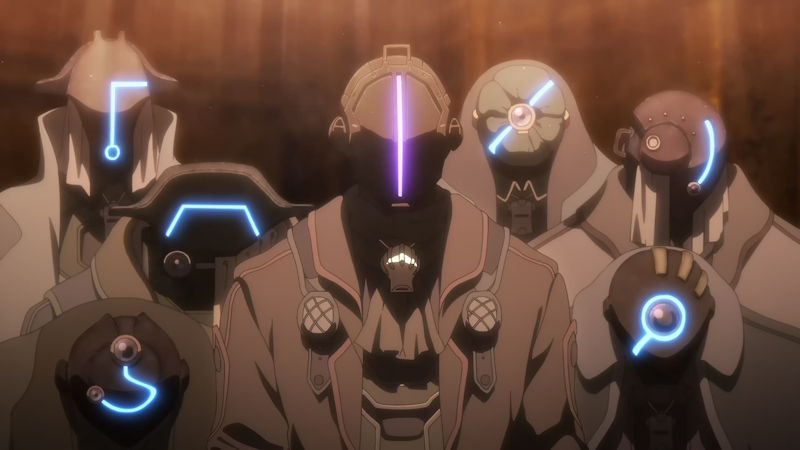 7
A disturbing pleasure to once more venture into the Abyss with Riko and her friends, even if the film format doesn’t suit the story as well as a series structure and the Abyss is a better antagonist than any other character
LATEST REVIEWS