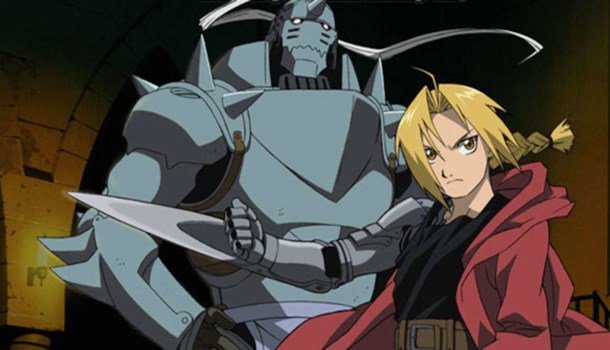 Full Metal Alchemist has quite the reputation. The very fact that it was being released in the UK gave Kev all the excuse he needed to write a full article on it, and we don't do that for just any old series. Unfortunately I'd never heard of it, showing just how out of touch I am these days!

In an effort to fix this I've sat through the first DVD, and although entertained I wasn't blown away. The series starts with a scary looking experiment undertaken by two young brothers, Alphonse and Edward Elric. Things go about as wrong as they can do, and the resultant catastrophe teaches the pair the first rule of alchemy - in order to make a gain, you must lose something of equal value. As such, the experiment to raise their dead mother takes a massive toll - Edward loses his right arm and left leg, and Alphonse loses his body altogether, and only Ed's quick thinking bound Alphonse's soul to a suit of armour.

The series then moves on to the brothers as teenagers. Edward has become a State Alchemist and wanders the country looking for the mythical Philosopher's Stone, which is rumoured to increase an alchemist's power and negate the law of equal loss. With it, they hope to regain their bodies and restore their mother to life.

The four episodes on the disc do a good job of easing us into the story, with the young Elric's experiments especially gripping. Although we're only offered a glimpse of some of the series major villains (Envy, Lust and Gluttony) their machinations behind the scenes are interesting to watch. Like Trigun, the series has yet to provide its best, but what's here is an enjoyable introduction to the world of Alchemy.

8
Fast, frantic and entertaining, but some way to go before the series really shines.