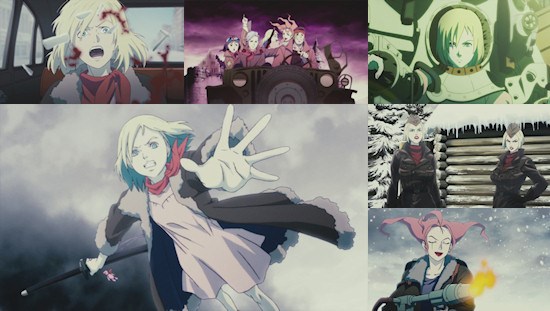 With Russia on the cusp of joining the Second World War as the Nazi threat rolls eastwards towards its borders, nobody is likely to pay attention to the strange, quiet and haunted girl who travels around as part of an act entertaining the troops massing in response to Hitler's quest for European dominance.  Even when the girl in question proves to have a remarkable, even psychic, talent as part of her act, there are more important matters at hand... or are there?  With German forces beginning their encroachment of Russia's borders, Nadya's role in preventing perhaps the most nefarious plan in the Nazi arsenal becomes pivotal.

So goes the basic plot of First Squad, an hour-long Japanese and Russian co-production animated by Studio 4°C but penned by Russian authors.  As Nadya is caught in the midst of a German air raid, her loss of consciousness allows us to explore her memories - of her childhood, and her training amidst a number of other similarly gifted children before an enemy raid tore them asunder.  Although her friends and comrades in the so-called First Squad have been lost to the land of the living, that isn't the end of the story for them - at the behest of her saviour from the air raid, she travels to the Kremlin where her true past as part of the squad are revealed, and more importantly her strange dreams are explained as an even more terrifying reality.

That reality is an attempt by Nazi occultists to bring a terrifying warrior from the past, Baron Von Wolff, into the realm of the living during a supposed "Moment of Truth", in turn allowing them to turn the tide of the war on the Eastern front.  Of course, the living have no chance in fighting the dead, so it's Nadya's mission to travel to the "other side" to gather her dead comrades as a fighting force to take on and dead Von Wolff at that same Moment of Truth.  It's a dangerous journey, but with the outcome of the war upon her slender shoulders Nadya has no choice but to risk everything for her country.

With under an hour to layout, present and act upon its story, it's no surprise that First Squad has to be brief in the coverage of its subject matter - after taking a little time to set things up early on, we whip through the rest of the movie with little time to build tension or any kind of resonance with its characters beyond Nadya herself, with whom we spent effectively all of our time.  Although this brevity is perhaps to the film's merit in some senses (this isn't exactly a highbrow movie which requires lengthy explanations), it does leave much of its plot feeling threadbare and thrown together rather than anything more carefully, thoughtfully crafted.

Although First Squad won't win any awards for originality (the whole Nazi occult angle has been used plenty of times before) or provoking thought, its production values do at least merge with the film's pacing to create a slick and visually impressive piece - the movie's muted colour palette gives off the feeling of a world at war where death is omni-present, and the animation quality is largely good and even occasionally striking when it has a point to make about the horrors and destruction of war.  Alongside this, the film's native Russian dub (there's no Japanese language track on this UK release) is matched by a decent English effort that does its job perfectly well if you'd rather see the film voiced in your own native tongue.

As well as the standard version of the film, a longer cut of the movie is also included on the reviewed Blu-Ray, which adds in a number of live-action faux "documentary" sections that posit veterans of the events portrayed in the film recounting their experiences.  Put bluntly, this idea really doesn't work when set against such an outlandish backdrop, so you're best served watching the shorter version of the movie which cuts these segments and sticks to its animated guns.

Ignoring its live action misfire, First Squad is an entertaining work that takes its idea and runs with it as well as you could expect in its running time as a single, self-contained story.  Arguably, its concept would have worked far better as a TV series with more opportunities to explore its characters on both sides of its supernatural conflict, but as it is in movie form we're offered an hour-long slice of dryly delivered but decent entertainment.  Whether this is enough to justify picking up such a short movie on DVD or Blu-Ray is perhaps a trickier question to answer - you're not getting a huge amount for your money - but as something removed from giant robots and Japanese high school fare it might just be worth a punt, even if its concept is no less daft than your average mecha anime.

7
A reasonably polished and entertaining outing, whose short running time is both a blessing and a curse in equal measure. If you can justify splashing the cash on an hour-long film, then First Squad might be worth a look.
LATEST REVIEWS