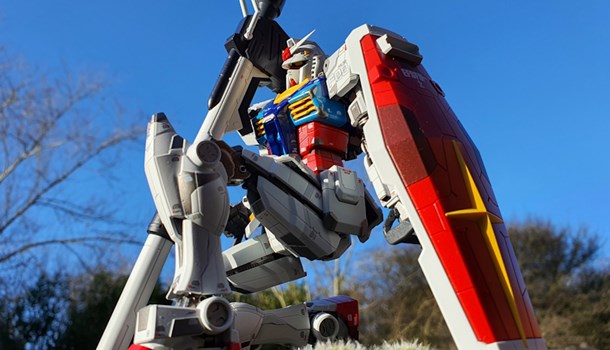 The Yokohama Gundam Factory is a thing of wonder, a life-size Gundam that can walk! As you might expect, merchandise for such a mechanical wonder is rife, and the cream of the crop is this 1/100 scale Chogokin figure, decorated in the Yokohama mecha's distinctive colours and decals. In short, a miniature version of the big guy himself!

Sadly due to the current issues with travel, visiting this exhibit is off the cards for the foreseeable future, and as such I've had to pay considerably more than the original price to bag one of these. I like to think of it as an advance souvenir, a declaration that come hell or high water, I will make it to Yokohama to witness this celebration of Japanese culture and ingenuity.

So what's in the box? To start with, we have the main figure, a pleasingly weighty metal frame unit that stands at seven and a half inches tall - perfectly in scale with the other Metal Build series Gundams. I've never much cared for the very simple design elements of the RX-78, sure it's iconic, but it's very basic compared to what followed. However, the designers have cleverly taken the silhouette/base colours and then added off-shade panels, warning marks, fine details and exposed metal parts to bring the Grandaddy of all Gundams into the present day, and it's a real pleasure to see. Probably the biggest aesthetic deviation is the light blue surrounding the chest vents and pilot cockpit, which adds some contrast to the basic colour scheme. I've never cared much for that bright yellow collar, and it's still massive here, but taken as a whole it all just works beautifully.

The addition of detail gives the figure a really modern feel, and the panelling brings it to life

From the rear, you have that traditional grey backpack which houses rocket thrusters and the twin beam-sabers which adds some lovely chunk. There's no lack of detail here either, it has more exposed metal, warning signs and painted silver highlights, this is a figure designed to look good at every angle.

The finish on the figure is mostly flat and screams premium. Just like the Metal Build Evangelion, the matt and almost chalky finish looks tremendous. Where sparkle is needed, metallic paint with flecks of silver really shine, most notably the chest. Further detail is found in the panelling, where white panels mix with light grey and bright reds mix with muted burgundy to create a pleasing patchwork effect. Coupled with all the safety markings, it adds

The accessories for the RX-78 add plenty of play-value

So what can we kit this madman out with? Well we get a plethora of paws, from grippy weapon hands, fists and pointing fingers, all of which will bring expression to your poses. They're made of rubber too, which makes sliding weapons into trigger-fingered hands a lot easier (though it's still takes a bit of a wiggle).

There's a stand to keep the figure stable, and you can attach weapon racks for the included bazooka and rifle. You have a laser-beam for each saber, a spare head-crest, clear pointy thing for pulling things out of sockets, and the iconic shield, which contains a sliding mechanism to move it up and down the arm.

It's a looker from the back too - so many boosters!

All in, you get what you'd expect for this Gundam model. All the parts are nicely painted with plenty of detail. I absolutely love the rockets to the rear of the bazooka, making it both a weapon and a booster. Magic!

Two items stand out on this release. The sliding panels in the legs are utterly beguiling and a work of mechanical genius. I love the engineering on this figure, and this simple movement to enhance flexibility while maintaining a solid look puts me in mind of 3A's Optimus Prime from the Transformers: Bumblebee movie, which contains similarly inspired levels of engineering.

The second is weaker, but still notable - there's a light-up gimmick which is operated from a switch located on the back of the figure's waist, but the panel is very small and easy to lose. When the lights are on, they're pretty weak and unimpressive, which makes the whole electronics gimmick something of a damp squib. What is clever is the way the eyes are still clearly painted gold even when not lit up, avoiding the "dead-eyes" that products with similar light-up optics are often stuck with.

Lights in photo may be duller than they appear

As a Gundam fan that came to the franchise late, I'm used to more extravagant mecha designs, but thanks to the care lavished on this figure, it doesn't feel out of place amongst the rest of my Metal Build Gundam collection. It has the signature heft we've come to love, plus nice stiff joints that can hold a pose, however you want to display it. The design elements taken from the Yokohama Gundam, such as the metal disks above the elbows and the distinctive colour scheme mark it out as something special, and not just the latest in a very long line of RX-78 kits and figures.

It feels wonderful too, the heft and stiffness giving it a hugely tactile sensation, as panels slide and metal rotates the satisfaction is immense. I love that the waist has some give to allow the figure to lean slightly, and that there's so much give in the articulation. It is, in a word, lovely.

It's not all roses and red wine however - ankle tilt is somewhat lacking, especially for tipping those toes in the way that looks so good on other Gundams when they're kept in the air on their stands. The lights are underwhelming (I'm surprised at how bright they look in the above photo), and the decision to make the red tab on the back of the waist removable and not a hinge (or better yet, a red button that could blend in) seems daft to me. And even with all that care and attention, the eyes are too big and that yellow collar is still not to my taste.

These, however, are simply flies on the windshield of a 100-mile-an-hour thrill-ride of awesome - irritating, sure, but hardly enough to ruin the fun!

In my eyes, this is a true milestone in the Gundam saga, a celebration that Japan has built the very first full-size Gundam, and while we can't take that one home with us, this Chogokin homage is more than enough to remind us of just how utterly wonderful the world can be when we celebrate our cultural icons and come together to create something spectacular.

10
Everything old is new again. Get one.