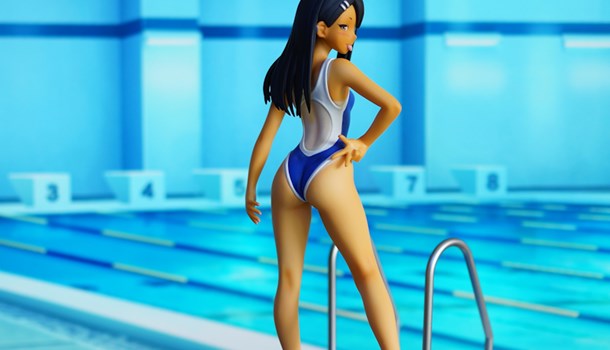 I have two confessions to make, the first of which isn't news - I'm a big Nagatoro fan. I absolutely adore the Sadodere antics of this aggressive but ultimately naive tease, especially when her escapades backfire and she becomes completely out of her depth.

The second is slightly more worrisome. As the only figure released to date from the series, my options for a representation of Nagatoro-san are limited. To one. And collector hub myfigurecollection had not been very kind to the release, everything from bad paint to a clumsy build that meant taking off the school outfit to reveal her swimsuit was not only a chore, but liable to damage the figure. Dare I order this impending disaster?

Well here we are, so buttons were obviously pressed. 13,800Y translates to around £90, cheap by most figure standards, and worth the risk as far as I was concerned. I had to hurry too, as the replacement figure has already been released with a different expression - gone is the cover-accurate tongue-poking, replaced with an awkward looking mouth that really misses the mark by some margin. Happily AmiAmi still had (and has at time of writing) stock, so in I plunged. (Shipping was a touch over 2,000Y for anyone interested, no customs were demanded).

Nagatoro comes covered in protective plastic wearing her school uniform. I would have preferred she come in just the swimsuit to be honest, as getting the plastic protection unhooked from her various removable parts was, as reported, a pain in the butt. The clothes unhook a bit like a bra, the shirt down the middle and the skirt down the side. Both parts of the school outfit are soft rubber, but because the arms in the shirt also pop out, it's a bit scary bending everything clear so that the paint remains un-scratched. It's not a striptease I'd want her to do often!

It's not easy to strip Nagatoro!

In uniform, Nagatoro's shirt is designed to look wet, with the fabric clinging to the blue costume underneath. It's a nice bit of cheesecake as it's more suggestive than revealing. The phone sticking out of her pocket is cute enough, and the piece works in a pool setting as she's placed on a poolside base with stair-bars and is barefoot in both costumes.

The pose is very cute, though I do wish they'd captured a little more of the mania Nagatoro embodies in the face. It is a fair representation of the cover though, so it can be forgiven - it's the lack of a little crooked line in the mouth to suggest canines that's missing, a small but necessary detail if you really want to get to the devilish essence of the character. Forgivable, but disappointing.

The face is cute, and the see-through nature of the shirt is a clever touch.

Out of uniform, you get to see the character's signature tan lines, which sit on the shoulder straps and most of her back, as well as around her underwear line. It's a nice bit of attention to detail and helps highlight the one of Nagatoro's signature elements.

This brings us on nicely to the paint. My copy is certainly a lot better than what I've seen online, but it's fair to say it has a "hand-painted" feel to it. There are some elements, like the trim on her swimming outfit, where the colours are outside the lines, most notably the white stripes on the swimming costume which stray onto the blue area of the costume a little too often. Paint is also a little rough in places and not as smooth as we'd expect from a company like Kotobukiya - it feels like a pre-painted kit rather than a finished release, so I can see why some people were dissatisfied. That said, there are nice touches - finger and toenails are painted pink, which is a lovely bit of detail, the wash applied adds some depth and the overall pose is very pleasing. I'm especially impressed by the tan skin-tone - it's just gorgeous.

The school uniform covers the imperfection present in the swimsuit, and as this is the way in which she's dressed for the cover this is copying, is the most likely way she'll be displayed. I do love that you get the choice though. 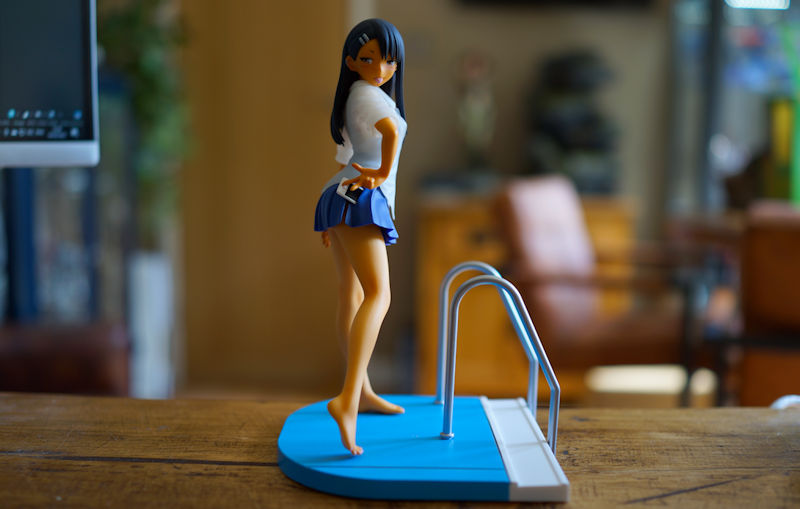 The base is a nice touch, certainly a change from the plain plastic circles I've had to entertain of late. Looking like a slice of the poolside, two plastic bars slot into the base (which requires more force than I expected) but once in look excellent. The appropriate texture is applied to the floor, and the frame of the pool looks correct to my eye too - overall, it really adds to the piece and is far better than I expected.

So let's sum up the experience; the figure has it's issues, mostly with the swimsuit and in not quite capturing the feel of the character (though it's a very near miss to be fair). I recommend picking a display option and sticking with it, as I don't expect the paint to survive too many costume changes given the awkward way everything connects.

That said, it's not the mess I was half-expecting - the playful pose, colours and base are excellent. It's a cute and sexy figure without being overt or gaudy, and as figures go, it's a solid, if not outstanding, display piece. It's good value for the scale too, 1/7 isn't a cheap option but here I feel you're getting more than your money's worth - possibly because at the time Bellfine created the figure, the character wasn't a hit. Because of the popularity of the series, I fully expect to see more options hit the market - there's plenty of excellent garage kits for companies to choose from if they want a good starting point.

I will be ready to create a squad of Nagatoro's should fate decide to deliver them to retailers.

7
Objectively a good value figure with 2 display options, but room for improvement. A good start for Nagatoro fans.