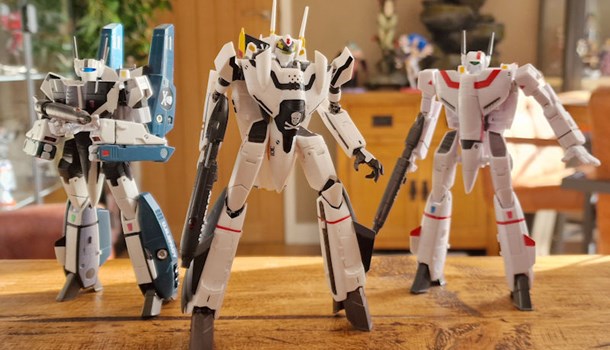 The Hi Metal R line has always been sporadic. Randomly throwing out Valkyrie designs, from the classic VF-1 series in various decos (Max, Roy, Millia, Hikaru and others) through to really obscure variants such as the Ostrich, right the way to the much-maligned Macross II (though I love the VF-2SS and own 3 of them), it's an absolute nightmare for completists.

The latest in this long line of mish-mashed Valkyries is Macross Zero's rather splendid VF-0S, the precursor to the iconic VF-1, which is larger and beefier than it's mass-produced offspring. It has some lovely details, such as the cheese-grater holes on the chest/top of the machine, lots of lovely panel lines and a bit of additional flair courtesy of the lightning style helmet and the skull & crossbones that tells you Roy Focker is in the cockpit. All in, it's a great Valkyrie design with a cool industrial touch.

The Hi-Metal series appears to be undertaking an opposite projection from the Metal Robot Spirits line, which is to way the former is feeling cheaper and more brittle with each release, while the latter is feeling increasingly premium and weighty. In fairness, the Gundams don't have to transform, so that matte paint is at far less risk of being scratched, but even so, I'm sad to say that the Phoenix feels like a pre-assembled model kit.

Yes, there are metal joints holding this together, but taking it out of the box it just fell apart. The two vertical vents on the chest popped off, followed closely by the chest (held on by 2 plastic c-clips on arms I can see breaking very easily) and changing the hands was a challenge because of the tightness of the connection and the need to hold down the forearm panel to prevent the metal sliding mechanism from being pushed out of reach.

The worst crime is that the plastic feels brittle and fails the sunlight test - hold it up in front of a window and watch the light just pour through the thin plastic wings. No recent Metal Spirits figure, which retails for the same value, has failed this test. There's also a slight yellow tinge to the plastic, so it'll probably start yellowing even if kept in darkness. This is, however, a very common problem with white plastic on Bandai's Valkyries, regardless of the range, be it Hi Metal R or Chogokin.

This thin plastic also prevents the panel lines from being particularly deep, rendering them almost invisible in all but the best lighting conditions. Forget the legs, you might as well attach the grey armour pods as you're really losing nothing by covering up what should be some lovely geometric details. It's also mis-transformed out of the box, with the blast shield not fully covering the cockpit, and it took a bit of research and courage to pull the incredibly stiff panel into place. Of course, the chest exploded several times while attempting it.

Transformation is the usual VF "rotate, chest, pull out cockpit, fold in arms and rotate legs" design we've seen before, but that's part of the design's appeal, so no criticism of that here. Execution, however, is another matter.

Bits literally just drop off this thing. On the one hand, having everything clipping into place allows for breakages to be non-fatal. This is good. However, it also allows the entire fiddly process to be a masterclass in pretty much taking it to bits and reassembling where you want things to go, less a transformation and rather a Lego-like reconfiguration in order to get the parts you need to where they have to go. It is immensely frustrating, and having only just recovered from attaching the fin funnels to the Bandai's monster Hi Nu Gundam Chogokin, this left a sour taste in my mouth. Maybe I haven't transformed a VF-1S in a while, but I don't remember it being this annoying. Just to get the head through its assigned hole, I had to remove the antenna. To get the arms in the right position, I had no end of trouble until one came away and I just left it to one side until I'd got the rest aligned. The chest jumped off and was the last thing to be popped back on. Aggravating doesn't even begin to cover it. Once done, all the tabs crunch together and it feels nice and solid, even if it was anything but getting it there. 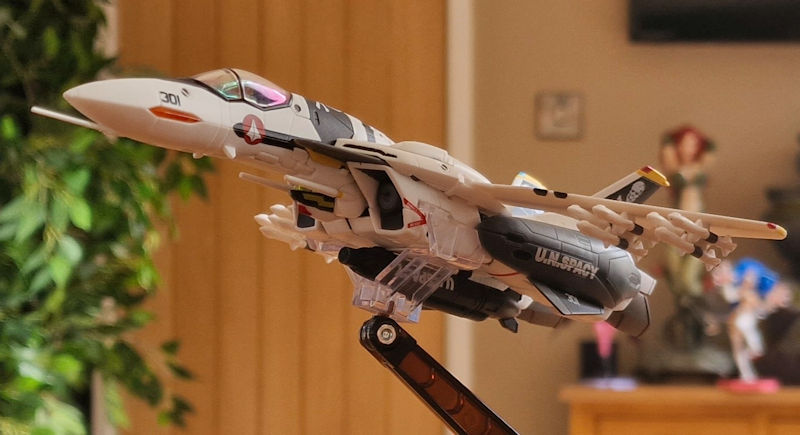 Getting this to happen is no simple task...

Now, once you have it "transformed", the problems with the Gerwalk and Fighter modes are simply down to presentation - there's a lot of cheap-looking unpainted white-ish plastic here, so while the silhouette and little painted details are lovely, the majority of it still looks like a cheap plastic toy. I dunno, maybe Metal Robot Spirits and Newage Legends Transformers, with their lovely paint, have just spoiled me. It's not like the rest of the Hi Metal R line is awash with painted detail, but there's no doubt that Roy's VF-1S and Max and Millia's red and blue models just look so much richer and more attractive.

In my opinion the figure looks its best in Battroid mode, chiefly because everything has been folded up and feels a lot more solid. There's a lot of options for you too - you can swap out the wings for a single smaller "folded wing" piece to bring the proportions into line, lots of hands (trigger, open, open palm, fists and small fists for transformation) which give it some character, an extending gunpod, spare antennae and armour parts that attach to the legs in any mode.

For the flying modes, you get a little pilot to put into the cockpit, landing gear, missile pods, wings with and without missile peg-holes and air vents. You can mount it onto the Roy Focker emblazoned flight stand in any of the three modes using multiple attachments.

So, you have a lot of display options. 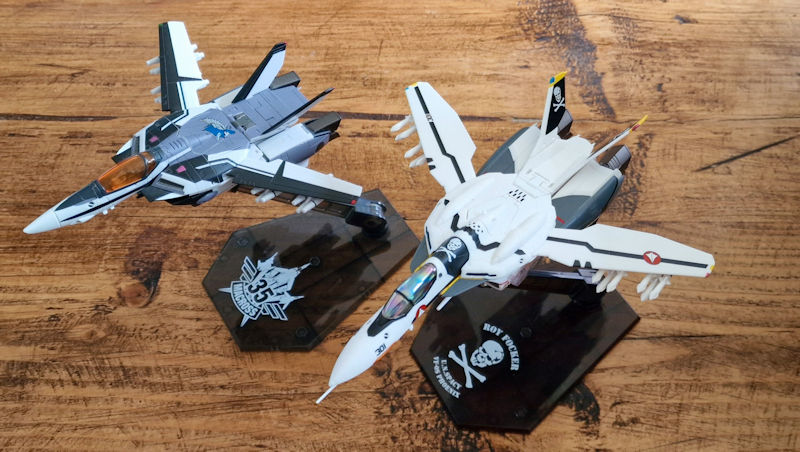 Ultimately, this is the only currently "in-print" version of this awesome fighter, and the sculpt does a solid job of representing the mecha. As I look over to my cabinet, full of Hi Metal R and Gundam Metal Spirit figures, I'm only saddened by the fact that this will never be a centerpiece, it's simply representing a design that I'm really very fond in about as adequate a way as possible.

Only Hi Metal collectors and Macross fanatics need apply here, it simply doesn't pop as it should, and that's a real shame.

6
It feels cheap, but we're comparing it to competition that has seriously upped its game in recent years, while Hi Metal R seems stuck in the past. 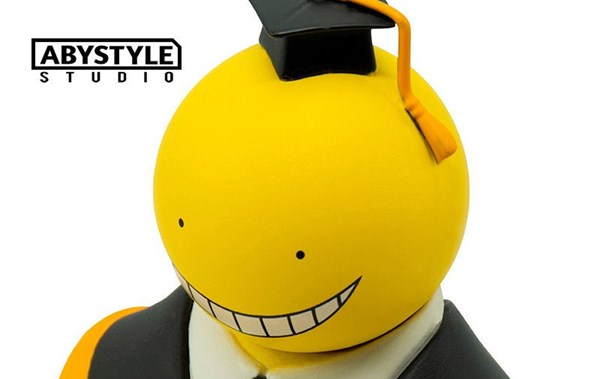 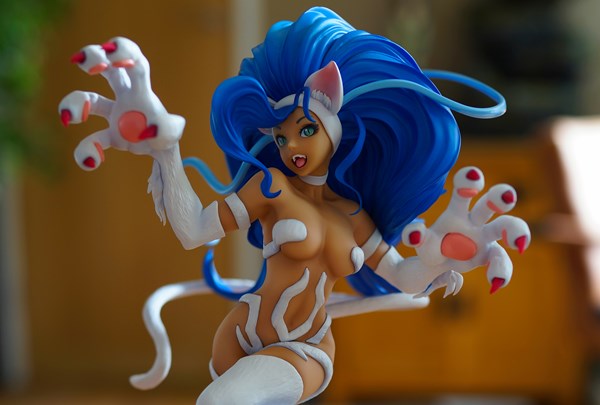 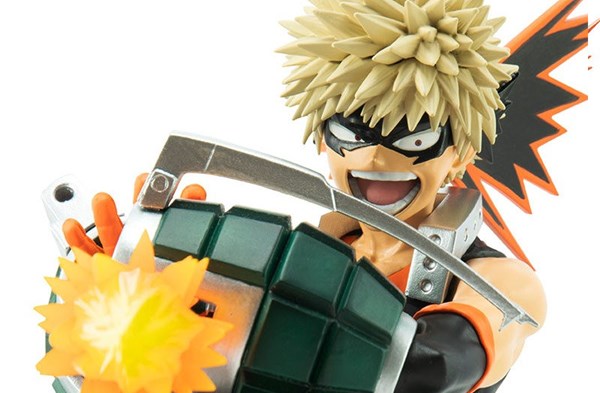