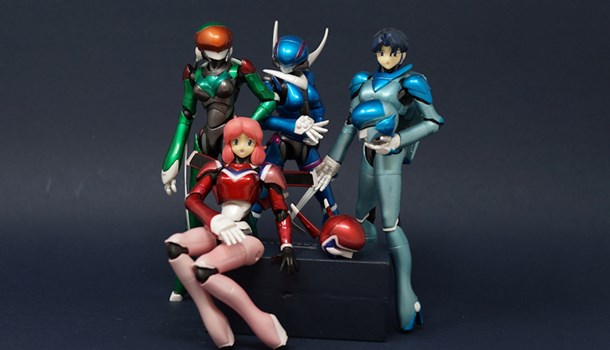 It took 10 years, but finally we were given the chance to own figures from the seminal BubbleGum Crisis. Originally I reviewed the Nene figure as it was the only one I could afford (not to mention she was my favourite character from the series). Recently however I managed to pick up Priss and Sylia too, so this updated article is a mix of my original observations and an updated take on what are now incredibly rare and hard to find figures.

Packaging
Each box is beautifully constructed, replete with a unique colour for each, character artwork, a subtle photo of the suit on the side and a nice big window to see what you're getting. They're certainly worth keeping, and will look nice as a set, with each character numbered 1-4.

Contents
The contents of the box are very generous - you get the hardsuit itself, a replacement head (without helmet), two pairs of hands and a special stand with a colour coded version of Nene's "Knight Sabers" signature emblazoned on the bottom.

These figures are pre-Figma/Revoltech, and as such the actual posability was quite a revelation for the time. Utilising what was termed "SMS" (Sai Moving System) each figure contains multiple ratcheted joints, making them highly manoeuvrable.

Made of PVC and sporting a high gloss finish, the hardsuits certainly look the part.

The paintwork isn't bad, but falls some way short of most current figures. Thankfully despite the odd painting glitch, the suits were never overly detailed and subsequently errors are given little room to show through. The high-gloss finish also helps to give the figures some shine, and they do photograph beautifully.

The heads are all anime-accurate, and capture the essence of the characters from the show. Nene looks especially bubbly.

Unfortunately, there are some flaws which are inherent in each figure. They're incapable of standing freely due to being very top-heavy. I had expected each figure to have the usual hole/peg mechanic that allows such figures to stand visibly unaided, but instead we are treated to some black plastic scaffolding, which looks bloody awful. The "claw" arrangement is quite intrusive, and shows up badly when displaying on lighter backgrounds, subsequently my photos, which I take using my dining room chairs, help to hide the issue.

The build quality is the second major letdown here - much of the armour is loosely connected - Sylia suffers quite badly as her gantlets slide out of their holes with alarming ease, and Nene's antennas are soft plastic which have curved and refuse to bend back properly. Nene's backpack also opens, but this makes her wings even looser and they tend to drop off. I suppose it's in keeping with the character, but Priss is rock solid.

The little ball joints used to connect the hands, neck and arms are also woefully flimsy, and I'm loathe to mess around with the figures too much in case one should snap off.

In my original review I posted "I can't imagine the trouble you'd have setting the whole group up without them either falling apart or falling over." Having now lived the experience, I can confirm it's like spinning plates. On sticks made of jelly.

Summary
Atelier-Sai were the first company to release action figures of the BGC quartet, and overall they managed a passable job. The sculpts are anime-accurate and very pleasing to the eye. The rather iffy build quality, cheap plastic and unfortunate scaffolding issues prevent them from being a must-buy. On the merits of the build quality these would rate a 6 at best, but the sculpt and finish elevate them above their flaws and, to date, stand as the best looking BGC figures around.

8
The girls of Atelier-Sai's BubbleGum Crisis have much in common with their real-life counterparts; stunning to look at, very expensive and a bit unstable, but ultimately once experienced, you wouldn't swap one for the world.