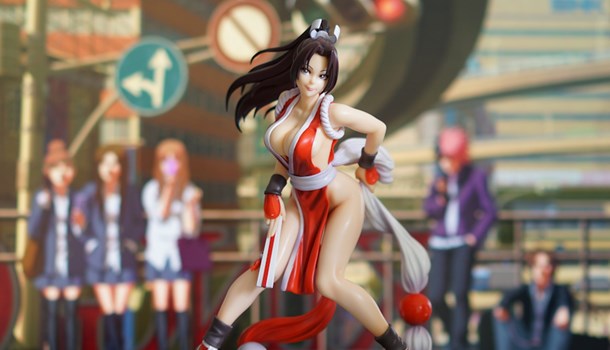 The Kotobukiya Bishoujo line continues to cherry pick some of the most striking game character designs, this time having their focus on Mai Shiranui, the poster-girl for SNK's popular Fatal Fury and King of Fighters franchises.

There's no denying that the buxom ninja has been designed to appeal to a certain demographic, but give the designers their due, she's up there with Jessica Rabbit for character designs that squeeze their curves into crimson dresses. No wonder her official nickname is "The Alluring Ninja Girl".

Apparently Mai's buxom chest was modelled after idol Fumie Hosokawa, with her rear taking inspiration from the late Ai Iijima. The designers based her famous "bounce" to be loosely based on Kunoichi, who would apparently seduce their prey before striking - these sexualised overtones and infamous curves are all faithfully recreated by this latest Bishoujo statue, and subsequently I'll be catching hell from the wife when she clocks it later... I don't have a lot of "sexy" anime figures, but with this, beach queen Nagatoro and Morrigan arriving so recently, it does look a bit like a pattern is developing.

So, my increased mortality chances notwithstanding, how have Kotobukiya done with their interpretation? Well, for one thing they've followed on from Morrigan and provided another terrific base, with a manhole cover and tarmac  replicating the road very well. The Bishoujo Street Fighter bases were all very plain, I'm pleased to say that trend seems to have stopped with other fighting franchise characters and that's definitely a good thing. 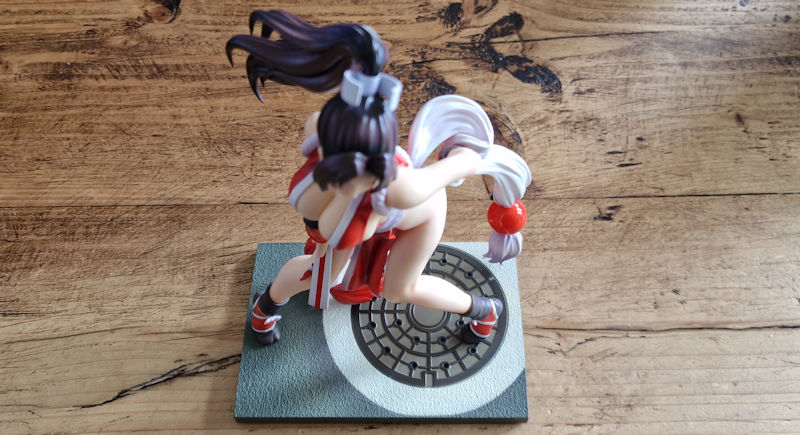 The base is nicely painted and textured, definitely an improvement over the Bishoujo Street Fighter counterparts.

The sculpt is very sharp, undeniably Mai in all aspects, from the dress, the twin tales and her Kunoichi footwear all looking absolutely superb. There's a good paint wash on all the apparel, which is splendid, and this continues to her hair as well. My only complaint would be that the skin could have really done with a matte coat, in a similar vein to the recently reviewed Nagatoro Beach Queen figure which had a lovely finish - Mai by contrast is very shiny, and that cheapens the overall look unfortunately.

That face is perfect.

On a more positive note, the face details are brilliant, as they always are in this line. Kotobukiya have perfectly captured Mai's playful but deadly look with a subtle smile and hazel eyes.

The overall pose is also perfectly evocative of her in-game appearance, so if you're a fan of the character then you'll likely love this figure. She looks poised, confident and ready to rumble, every bit the skilled fighter she is on screen. 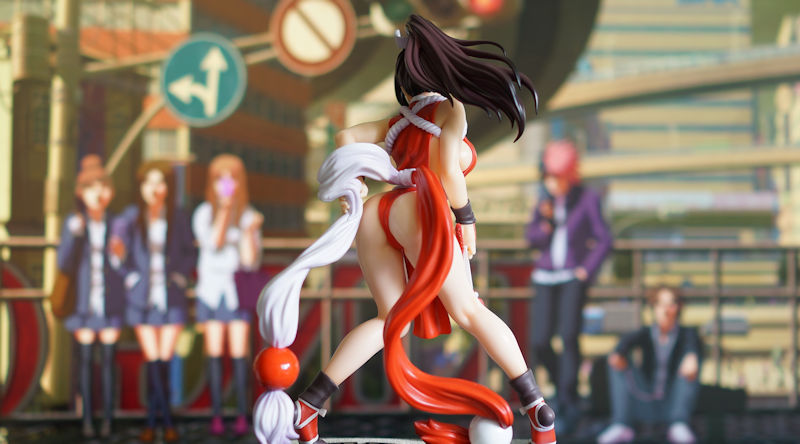 True to form, it's a bit male-gazey, but as with Darkstalkers Morrigan that's a part of her character.

Honestly I think this is an absolute must for SNK fans - it's a fantastic representation of a legacy character, and worthy of a place alongside other fighting statues. Obviously her underlying design is perfect fodder for the Pretty Girl statue treatment, and Kotobukiya have not disappointed with their execution.

9
A beautiful representation of a beloved legacy character