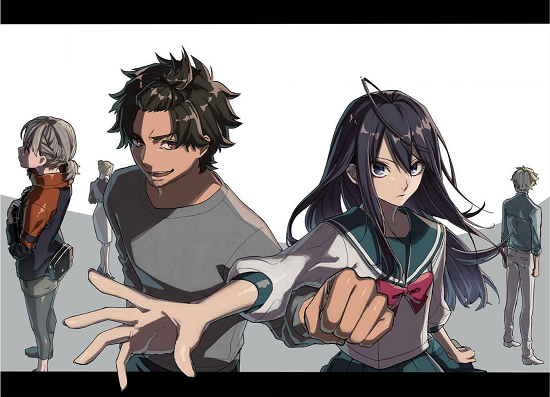 Although there have been recent frustrations with Amazon withdrawing a raft of light novels from sale due to their… uninhibited content, anime and manga titles being deleted because their authors themselves get into bother is a comparatively rarer occurrence. Some of you may remember back in 2018 when J-Novel Club cancelled its translation of [New Life +] Young Again in Another World, after just two volumes of eighteen had been released, when the author MINE was accused of racism. This did not just halt MINE’s English publication also seems to have destroyed his domestic career in Japan too, as production stopped on a planned anime version of [New Life +] and the only subsequent credit for MINE I can find is key animation on a single episode of My Hero Academia. It seems a lot, but such an event stands out for how unusual it is.

As it happens, I still have both of the translated volumes of [New Life+] Young Again in Another World saved on my Kindle, preserved as artefacts of digital archaeology, but in all honesty its cancellation was no great loss to literature – the “another world” title gives the game away that [New Life +] was a resolutely generic, paint-by-numbers common-or-garden fantasy isekai that could have been written by one of those machine-learning programs. Nonetheless, I have remembered something that’s otherwise so forgettable mainly because for those of you who missed out on a kerfuffle back then now have ringside seats to a new controversy.

act-age is one of Shonen Jump’s bright young things of the new generation, running consistently since 2018 with over 120 chapters published. Just last week Right Stuf praised the manga, mentioning it alongside Death Note as having the potential to be one of the “outside-the-box ideas that lead to great success” while the Anime News Network adored its “realistic, human authenticity”. All in all, Viz Media seems to have landed themselves a prize catch by licensing act-age…

…or at least they had, until last weekend. With the serious allegations against the author Tatsuya Matsuki, Viz is left in an unenviable position. Are people rushing to make dramatically final decisions? Matsuki has not yet actually been found guilty of anything, and it is not just him who is being punished by the cancellation of act-age – over the weekend there has been an outpouring of sympathy across the internet for act-age’s artist Shiro Usazaki, who is accepted to be unconnected to the affair and is widely agreed shouldn’t be dragged down as well. While the manga's ultimate fate is debated, what of act-age itself? Is act-age a developing masterpiece that has been tragically cut down before its time by unfair circumstance, or is it bunkum filler that would have no profile at all if it wasn’t for the no-such-thing-as-bad-publicity luck of being roped into gossip and scandal?

Kei Yonagi has a hard life. She’s only sixteen but has been forced to grow up fast and take responsibility far too soon. She has no parents – her mother has died and her drunkard father abandoned the family years ago – and her life is a constant rush of trying to keep the plates spinning as she runs between school, jobs, and caring for her young brother and sister. Nonetheless, even though Kei’s life is one of constant work and worry, she still is inspired by a dream. The one luxury that the poor Yonagis have is a bookcase of old videotapes of classic movies, and after her siblings have gone to bed Kei stays up late every night watching them, enchanted by the projector’s light like a moth to a flame and one day dreaming that she might join them – not just for the sake of fame and fortune, but the purer objective of truly experiencing the emotions that these movies make well up in her breast.

Kei is under no illusions about the unlikelihood of ever realising her dream – she knows that tens of thousands of hopefuls compete for but a single role – but she might just be finding her lucky break, for during one audition she catches the eye of famous director Sumiji Kuroyama. He’s arthouse hero beloved of the festival circuit, but for all his international accolades he’s virtually unknown back home in Japan. Kuroyama himself has a dream, of creating a movie of such singular vision that it will revolutionise the Japanese film industry – and Kuroyama is struck by the thunderbolt that in Kei, he’s found his star. That star will still need polish before she can truly shine, and so Kuroyama is determined to rope Kei into his production company and begin the long process of building up her talent towards Oscar glory. Can both Kei and Kuroyama negotiate the pitfalls of showbusiness to make their dreams into a story worthy of immortalising in celluloid?

The set-up of an adult man managing a teenage girl is more than a little unfortunate in retrospect, given the crimes for which Tatsuya Matsuki stands accused, but it needs to be established there is essentially zero fanservice – act-age isn’t remotely sexual and although there are a few bath scenes it's treated as as simple fact of Japanese domestic life and all detail is whited out. To avoid assuming associations retroactively and taking act-age on its own merits, the story doesn’t really work as a reliable guide to the Japanese film industry – despite asides explaining what extras are and running through the various roles of camera crews, it’s not an educational piece. That becomes clear in the middle of the manga where Kurayama sends Kei to a period drama, and when the evil daimyo cuts down a child in the street Kei – so engrossed in Method Acting that she thinks she’s actually in Edo – rushes to save the child and even outright attacks the lead. In real life a no-name extra like Kei, who hasn’t exactly earned diva status yet, would have been instantly burned by her agency by Take One but in act-age she gets to intervene and ruin the scene three times! Kurayama's situation also seems implausible - Japan's entertainment industry is not so parochial that Kurayama can be an award-winning director overseas but nonetheless be so shut-out that he's barely able to commission a TV commercial in Japan. His situation sounds like Matsuki is trying to have his cake and eat it too, with a hero who is a super-duper mega-talent but also the sympathetic underdog - he would have been a better counterpart for Kei, and set up more drama and conflict for the future, if he also had nothing behind him than his own dream. In any case, your suspension of disbelief is going to have to do a lot of back-breaking lifting to carry the plot in act-age.

You can appreciate act-age better when you remember that it’s a Shonen Jump title – this is a battle manga where the arena just so happens to be a sound stage. An affecting intensity of emotion to Kei’s performances is what act-age does do very well. The tone is set early on when the chief of a major talent agency rejects Kei – but not because she dismisses Kei, but precisely because she acknowledges Kei’s natural talent and wants to protect her because she fears that Kei’s emotive performances will cause her to burn herself out. The unusual approach to the situation immediately marks out act-age as an intriguingly sensitive story - you’d normally expect an executive character from Central Casting to be a typically snobby, stuck-up harridan looking down her nose at the poor Kei because she’s not got a RADA pedigree, so her concerned demeanour is unexpected and original and shows skilful narrative flair – at once giving a suggestion of Kei’s acting power-level, but in a way that is not just everyone making a double-take in shock and awe and instead shows a breadth of expression.

Kei herself is also an interesting heroine. She’s disturbingly proud – in addition to a weird exaggeration of professionalism where she tries to reject her pay because she feels she didn’t exaxctly follow the brief even though the client was perfectly happy with the take, it’s mentioned in dialogue that although her father walked out he still sends the family money, but Kei refuses to spend it out of principle of not relying on him. In isolation that would seem grotesquely self-indulgent when she has two young siblings to support, but you understand how badly Kei is knotted up inside when she visualises past experiences to ensoul current performances. It’s balanced and Kei remains appealing as a heroine because although she’s proud, she’s not angsty – when she glassily stares out of the window for hours it’s not because she’s fuming but because she’s absorbing the world around her, and she approaches her opportunities with cheerfulness. I genuinely wonder how Kei's attitude will survive future challenges.

There's also a quirk in the writing: throughout the volume Kei calls herself, and is referred to by others, as an "actor". At first I dismissed this as just the modern fashion for gender-neutral terms (I never understood the hostility to feminine forms - 'actress' isn't diminutive, it's a more substantial word. Girls get two extra letters for free!), but then something interesting happens when Kei meets the big star Chiyoko and the script's consistency breaks to call Chiyoko an "actress". Is this subtle mockery of the rival as a luvvie? How very catty!

Where this first volume does fall down though is fairly uneven art. It’s a shame that I have to criticise the artist when it’s the writer who’s created so many problems for this manga, but in all objective analysis it is very erratic. Individual scenes can look good, particularly money-shots framed from the film that’s being made in various chapters, but backgrounds are vacant, faces can be flat, and there is trouble with perspective and proportions – Kei herself seems to suffer with arms, a few times looking shrivelled up and too small for her torso. One audition scene asks Kei to act as though she is being attacked by a feral dog – the idea is good, with a ghostly image of the dog being visualised in front of her, but the execution is off as the panels are simply too small to appreciate what’s going on and the mental dog has no presence or drama at all. Still, I don’t want to judge the art too harshly – this volume was Shiro Usazaki’s first professional manga and the art shown here is a few years old, so I am confident that it will improve as volumes go on – if we ever get to read them.

That’s ultimately the shame of act-age – there is the seed of growing ideas here, and it’s a tragedy  that those fresh shoots have been uprooted so violently. Now that the manga has been cancelled and reprints halted, collectors will probably be stripping the shelves for rarity value of the first-volume copies that still survive in the wild – reports are that all previous twelve Japanese tankobons have entered the bestseller charts in Japan – but hopefully act-age can have something other than surrounding notoriety for which it can be remembered.

5
An unpolished but earnest story with promising ambition to be more than just a manga take-off of “A Star is Born”.
COMMENT AND DISCUSS
blog comments powered by Disqus