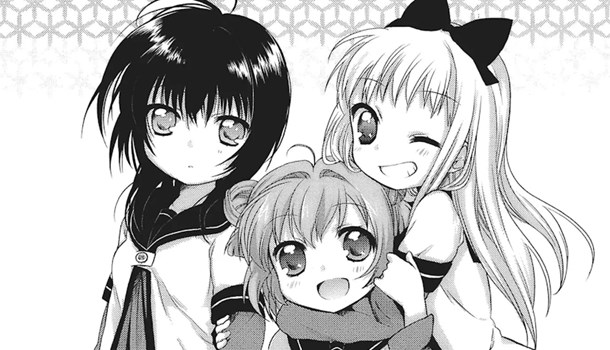 Having watched and enjoyed (to varying degrees) its anime outing, digital manga outlet JManga have now brought the first volume of sapphic-tinged comedy YuruYuri's source material to an English-speaking audience, thus allowing its fans to enjoy it all over again in a different format.  It's the kind of thing that we wish would happen more often here in the west (after all, most anime are produced largely as promotional tools for their source material despite frequently being enjoyable in their own right), but for now we're happy to take what we can get and this is hopefully a notable opening gambit to seeing more similar series licensed for digital distribution outside of Japan.

Anyhow, with that snippet of broader commentary out of the way, what of this series itself?  For anyone who has watched the anime the events of this opening volume of YuruYuri should be easily recognisable, as we join a group of three girls as the youngest of the trio, Akari Akaza, is reunited with her old friends as she embarks upon her life as a junior high school student.  Rather impressively, during their first year at the school her friends Kyouko and Yui and have managed to misappropriate the room used by the school's now-defunct tea club, creating their own after-school club in its wake - the decidedly unofficial "Amusement Club".

From here, we get to follow the simple adventures of these girls as they goof around as part of their club "activities" (i.e. trying to entertain themselves and one another), collect a new member named Chinatsu who was actually looking to join the tea club, and see a run in with the student council turn into an occasionally halting friendship with the members of the council body.  Oh, and there are lots of nose bleeds too.  *Lots* of nose bleeds.

If you hadn't guessed already from the title, YuruYuri has more unresolved sexual tension than a modern detective drama - every girl within the series has at least one crush on another character (or in the case of a character like Chitose, a propensity to fantasise about pairings featuring whoever happens to be stood in front of her at that moment) and there's little or no attempt made to hide these crushes, bringing forth a number of "tsundere" characters that vacillate between slagging off the apple of their eye and being sweet to them and so on.

While there is comedy inherent in some of these crushes - poor Chinatsu for example, is crushed upon simply for looking like the lead character of an in-world magical girl anime - it isn't really where YuruYuri is at its sharpest.  Instead, this tends to come when this first volume looks to break its fourth wall or otherwise enter self-referential territory, whether it's trying to figure out a way for Akari to have more presence in the series after all-but disappearing for a few chapters through to a colour insert in the volume that sees characters arguing over what they most want to see represented in colour.  It's these moments that bring most of the laughs in a series that is occasionally clumsy and unfocused in its attempts to grab a laugh from the reader, but does at least carry its sense of frivolous fun throughout to guide you through its more lackadaisical moments.

Presentation-wise, I actually prefer the original character designs of this YuruYuri manga than the softer and arguably toned-down aesthetic of its anime adaptation - it may be a little less striking when it's mostly shorn of colour, but the general art style is pretty good and fitting for the light-hearted tone of the series.  JManga's English translation makes a decent fist of what is occasionally a tough job thanks to some wordplay and references that don't fit cleanly in English - sometimes the translation sidesteps attempting to provide an English equivalent at all and relies instead on a translation note, and once or twice the English text feels unwieldy for a few panels, but its a perfectly legible and readable experience that never becomes frustrating.

As a whole, anybody who has enjoyed YuruYuri's animated machinations will gain an equal amount of pleasure from the first volume of its original manga - the anime has clearly remained pretty closely related to its source material while fleshing it out while necessary, but a lot of the best jokes perform equally well in either medium and its characters are as instantly recognisable in either form.  This isn't enough to make YuruYuri a comedy classic - its a hit-and-miss affair that doesn't strike its target quite as often as it probably should - but it does make for a fun distraction that can be consumed in bit-sized (or rather, chapter-sized) chunks quite effectively.  If you need a dose of simple comedy to read and don't mind a series chock-full of lesbian undertones then this could prove to be an enjoyable little manga to keep up with.

YuruYuri is available to be read and purchased at JManga.

6
A hit and miss comedy that won't set the world alight, but will regardless delight fans of its animated adaptation and might well find a place in the heart of others.