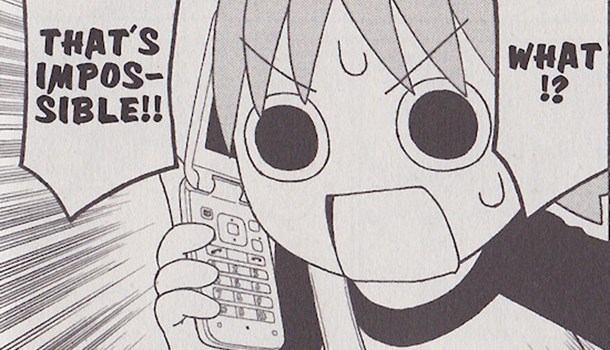 I'm not sure that there's anything I can add to Elliot Page's excellent appraisal of everything that is wonderful and glorious about Kiyohiko Azuma's Yotsuba manga - its delightful take on the wonders of childhood (and indeed being around a young child) might be hugely rose-tinted, but that doesn't stop it from being both nostalgic and downright funny at times.

Needless to say, the tenth volume of this hugely popular manga series sees no sign of its quality abating, as it continues to extract joy from the simplest of subject matter, be it a trip to an electronics store through to an attempt to make pancakes.  Oh, and yes, before you ask, this particular volume does also bring us the return of Danbo in suitably hilarious circumstances - you know you're onto a winner as a manga artist when an initially throw-away setup within your story ends up turning into figures and the forefront of Japanese TV commercials.

Quite simply, it's almost impossible to fault Yotsuba - if you worried back in its early volumes that it might run out of steam then you'll be pleased to know that it still shows absolutely no signs of doing so, and even as an admittedly relative newcomer to the series its wonder doesn't diminish in the slightest even if you devour its entirety to date in relatively short order.  If anything, this tenth volume sees the series hitting new heights - now that its characters and their particular foibles are so well known, every page can concentrate on providing something to either make you laugh or catch your eye, and as always there's a beautifully expressive simplicity to its characters offset by some wonderfully detailed backdrops that only rarely threaten to jar when set against one another.  The series also continues to benefit from not being constrained to a four-panel format as per so many other comedy manga series; the ability to mix and match panel layouts to suit what's going on gives each chapter or scene a natural flow and balance that ensures that it never feels forced or has to reach its "punch line" prematurely.

It would be easy to go on and on about the series, and this volume in particular, but there's only so much gushing praise one can have for Yotsuba before it all starts to sound a little sickening; but as a manga which is suitable for (and will entertain) everyone no matter how young or old, or no matter what their other tastes, this series is simply unrivalled.  The worst part of it all is reaching the end of the volume, and realising you're going to have to wait a while for the next instalment - although even then, the prospect of simply reading the whole volume again is almost irresistible.

On a more technical level, Yen Press' treatment of the series continues to be great, with translation notes when required (admittedly rarely for this series) introduced on-page next to the relevant panel, while the quality of both translation and presentation is high.  Given the fact that it's so flawless all-round, it makes for the easiest final statement a reviewer could possibly hope to write for any volume of manga: Just go buy it, if you haven't already.

10
Another near flawless instalment of unbridled, over-flowing everyday fun and mirth through the eyes of everyone's favourite manga child.