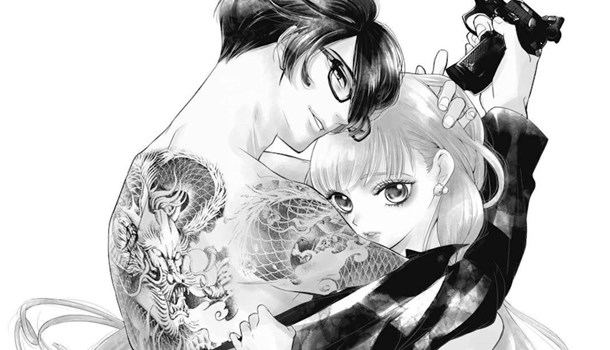 Yakuza Lover, or Koi to Dangan in its native Japanese, is the story of 20 year-old Yuri and a fateful interaction at a party with a young Yakuza named Toshiomi Oya. Impressed by her fiery spirit, he decides to pursue her as his love interest, and Yuri finds the allure of a gorgeous man and impending danger a hard mix to resist...

As a man I often find it quite illuminating to read manga and novels  aimed at the opposite sex - in fact it's why I enjoy Kelly Armstrong's Bitten and subsequent Women of the Otherworld spin-offs - mostly because of the often more thoughtful narrative and insights into how women view relationships. It's certainly true of Yakuza Lover, as Yuri's thoughts and feelings are often laid bare, while Owa is left to be a man of means and mystery.

Initially afraid of the danger Owa represents, it's an attempted assassination that really pushes the two together, the excitement of the event triggering a deep desire within Yuri who can now think of little else than the man who wants to woo her.

The pace is quite tantalising too - while passions do extend to sex, the lead up to the event is set over several weeks, with every incident leading up to it a sort of prolonged foreplay. I can't decide if Oya's "I'll call you again.. if I'm still alive" is sincere or cheesy, but it works in context and certainly gives Yuri much to think about between engagements.

Yuri in fact carries much of the book - her anxieties, concern for her family all contrasted against her desire for an older suitor give the book some much needed depth. It also helps that she's likeable - cute, funny and feisty, it's easy to see why Oya is initially attracted to her. You can't be a Yakuza's moll without some backbone, and Yuri's inner-strength is often on show as she makes requests of Oya, which only serves to increase his attraction to her.

Once we get to the act itself, the art is detailed and titillating - it isn't overly detailed in terms of graphic content. While it's clear they're in states of undress, the sex is conveyed without showing the uglies being bumped, instead showing the lovers passionately intertwined in various positions and showing carnal acts in as much detail as is required to convey the mood. It's not a book you'd want your kids to read, but it's not crass either. I'd say that Nozomi Mino strikes a good balance between passion and provocative imagery.

Even with the raunchy bits placed to one side, it's a good read; both Owa and Yuri are interesting and believable, the translation into English works well to convey the emotion and the occasional change in tone, especially the humour, keep things entertaining.

In all I enjoyed Yakuza Lover (on-the-nose title aside). The artwork is wonderfully versatile, the plot is engaging, and with other underworld bosses now seeing Yuri as a potential weakness for Oya there's promise of more danger to come. It'll be interesting to see what direction the book takes, whether it will stick to the romance aspects or end in Scarface style tragedy, but for now it's a great introduction to an intriguing romance.

8
Deftly walks the line between titillation and drama, the adult themes lend welcome weight to this underworld romance.