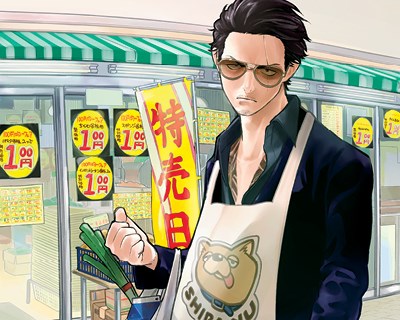 Some things should not go together - pineapple and pizza, chilli and chocolate, Ant & Dec and talent.

So when I was introduced to way of the house-husband by Kousuke Oono I had to wonder how does this series (that, since its first release in 2018, not only got a live action adaption but a planned 2021 animated adaptation) make hard boiled Yakuza and comedy work as a premise?

The answer was: surprisingly well.

This first volume introduces us to “Immortal Dragon” Tate, a hard lined, grim looking ex-Yakuza who'd not look out of place in any standard-fare crime story - at least until you see him preparing a bento for his wife Miku and taking Instagram photos of it on his mobile.

And then it gets weirder.

The series seems to operate, for want of a better word, in a weird reality where Tatsu and other Yakuza seem to act so out of character as to become farcical – a chance encounter and chase between Tatsu and a local Yakuza Boss (whose group we discover in a flashback Tatsu had single-handedly destroyed) turns into a scramble for bargains at a local clothes store.

And all the time the artwork draws Tatsu in a continuously creepy style, with shadows covering his making him look extremely creepy - coupled with his use of Yakuza style slang for even the most mundane of things, it feels as though he has stepped out of another series - and yet, far from failing, Oono Kousuke managed to make these seemingly disparate genres work, with the very surreal-ness of the situations being written to hilarious effect. Just one example is Tatsu's celebration of  Miku's Birthday – with the bizarre angle of the party being decorated in the style of a Yakuza initiation ceremony!

Going back to the art, alongside the focus on making Tatsu look hench at all times, it also boasts a near photorealistic style to the background details, similar to yotsuba& mangaka Hirohiko Azuma.

So all-in-all, Way of the House Husband is a fine comedy series which, with an additional five volumes already published in English already, guarantees plenty of gangster based insanity for many years to come.

And now I suddenly have a hankering for pineapple pizza...