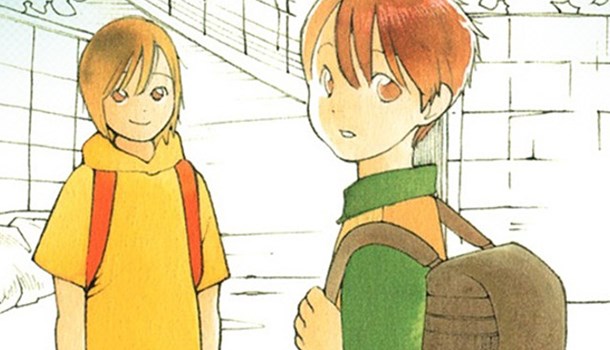 In our fog of world-weary cynicism, we often view certain manga and anime series with a shrug and a sighed exclamation of "we'll never see that series released officially in the west".  Perhaps one of our prime candidates for this in recent times would have been Wandering Son - despite its anime adaptation streaming via Crunchyroll, its original manga didn't particularly seem like a prime candidate for an English language release.  Yet here we are, with a copy of Fantagraphic's rather delicious looking hard cover first volume in our hands - enough in itself to iron some of the furrows from my tired brow.

At its core, Wandering Son is the tale of two youngsters - the rather feminine Shuichi Nitori, and tomboyish Yoshino Takatsuki.  When the former transfers schools he soon finds himself drawn towards the latter as they strike up something of a friendship, at a time when both individuals begin to question their place in the grand scheme of things and, more importantly, the separation of the genders and roles assigned to them and those which they feel more comfortable with.

Into the middle of this conflicted pair comes Saori Chiba, a frank and outspoken girl who takes an immediate shine to Shuichi, prodding him along down the road towards expressing and investigating his feminine proclivities on account of her pull no punches demeanour. At the same time, Saori quite clearly holds a torch for him as she finds herself shunned by other classmates thanks to that very same attitude.  When thrown in to the wider social structure of a new school, parents, siblings and so on, there's plenty of room here for drama and fraught emotions as Takatsuki and Nitori in particular have to struggle with their particular gender assignments and how to break out of them in the midst of the more typical issues and traumas that come from growing up.

If you're used to manga series dropping you into the thick of things immediately, then you might be a little disappointed by the early chapters of Wandering Son.  For starters, the artwork is simplistic to the point where it's occasionally difficult to tell characters apart (an issue even the author admits to in a note at the end of this volume!), and the use of language is equally basic - befitting of its young characters certainly, but it still feels a little jarring and unsettling initially.  Across the duration of its first couple of chapters, it feels like you aren't really getting anywhere with the series as it goes about setting up its key characters and concepts, to the point where you almost feel like putting the book down and doing something else.

If you reach this conclusion however, it's well worth persevering regardless, as despite that slow start the further you proceed through this opening volume the more you'll find yourself drawn into it.  In fact, it soon becomes clear that those early chapters have actually done a pretty good job of introducing its characters, as you become increasingly invested in their varied predicaments and decisions.  Each individual grows and blossoms into a fascinating character in their own right, each with their own foibles and decidedly human way of dealing with any situation that feels "right" without ever descending into overblown drama.  Despite its cross-dressing overtones which become increasingly significant throughout the volume, you can even find yourself relating with characters and their growing pains against your own recollections of your youth - Wandering Son paints with a far broader brush than its key concern might suggest, which is why it becomes so difficult to put down as you read further and further through its pages.

Helping this opening volume along as it grows and matures is an intelligent and almost luxurious presentation courtesy of Fantagraphics - the book's hard cover and page quality is impressive in its own right, and the manga's translation is clearly a careful and considered affair, with some of the decisions made with regard to that translation explained in great depth via perhaps the most exhaustive essay-style set of translations notes you're ever likely to find.  This release is admittedly expensive, but at least it feels worthy of its price tag in terms of its finish and presentation.

To say that Wandering Son isn't a manga for everyone is perhaps stating the obvious, but despite the potential to make light of its cross-dressing, coming of age tale it proves itself to be an impressively subtle and considered take on growing up within this opening volume.  Its artwork is nothing to write home about and it doesn't immediately grab you by the collar, but give it time and you'll find an impressive, character-driven series beneath its simplistic surface that will both charm and fascinate you, leaving you rooting for its characters and wanting to follow them through to (you hope) eventual happiness.  Let's be honest, it's not every day you can say that about a manga series afforded a western release either.

7
Its simple artwork and a slow start might put you off, but stick with it and Wandering Son's character-centric charm will ultimately win you over.