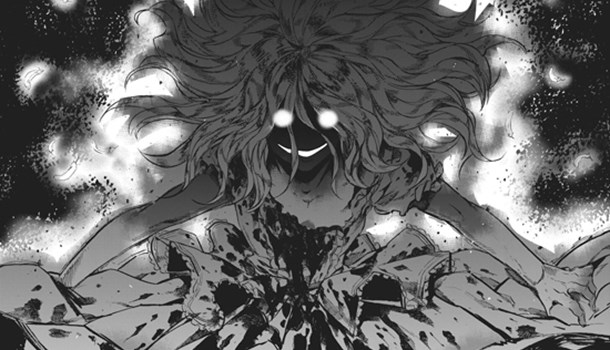 If you’re wondering what sort of things I’ve been getting up to during my hiatus away from the UK Anime Network, one of them is catching up on my big stack of unread copies of 2000AD which build up while I’m out of the country on work placements. I have to confess to having something of a split loyalty – in addition to being an incorrigible weeaboo I’m also a “Squaxx Dek Thargo” and an avid reader of Britain’s premier domestic comic book: before I started out at the UK Anime Network I also wrote for the (now sadly defunct) website 2000AD Review. 2000AD stands out as significantly different from the modern manga market not only for its larger pages and full-colour art but also for its anthology format. While that seems to have fizzled out for English-language manga outside of Shonen Jump – the Yen Plus manga magazine has been cancelled for almost a decade now - the anthology format used by Tharg The Mighty’s ghafflebette organ has gone strong for fifty years and has always meant that there is a great deal of variety in every prog – if there’s one story testing your patience you’ll only have to suffer it for a few pages without it taking over the whole book, and there’s always the chance of uncovering a new delightful treat that you didn’t realise that you would enjoy. One of those pleasant surprises for me in recent years was Defoe, a zombie story with a difference. I mentioned in my review for the original release of I Am A Hero that the zombie apocalypse seemed to have every potential variation done before but Defoe found a genuinely novel twist to the genre by creating a historical zombie apocalypse, changing the setting to seventeenth-century Restoration England where the foetid alleyways of Old London Town were beset by shambling “reeks”.

The story of Defoe was deliriously manic – the first story arc features the unquiet ghost of Oliver Cromwell selling his soul to Satan to be avenged on Charles II with zombies bearing Old Ironsides’ decapitated head on a pole as it spits and curses against the king’s bedroom window, and by book four Robert Hooke has evolved his skills in watchmaking to creating clockwork zombie cyborg prostitutes. In recent years though Defoe has sadly run out of steam as writer Pat Mills became distracted by his various personal hobby-horses – the latest book spent a greater deal of time telling us via performative zombie attacks that editors and publishers are big ol’ meanie-poops keeping him down – which, coming from a man who has had thousands of pages published in his own magazines came across as an obnoxious insult to every struggling amateur writer in the country. My dissatisfaction with Defoe then is what attracted me to Seven Seas’ zombie manga Versailles of the Dead, a manga taking another crack at the ‘zombie historical’ concept free of Mills’ encumbering baggage. Is it mining a fresh new seam of buried treasures lost to time, or is it just exhuming a tired gimmick as old as the era it depicts?

It is the mid-eighteenth century and through the forests of ancien regime France rides an opulent carriage. The main passenger aboard is none other than a young teenage Marie Antoinette, Archduchess of Austria, travelling into France to be wed to Prince Louis, the Dauphin and heir to the Kingdom of France as the future Louis XVI. Also travelling with Marie is her twin brother Albert – but any exploration of this remarkable family connection hitherto missing from the historical record is abruptly cut off when the carriage is sent crashing off the road, swarmed by a ravening horde of zombies! The royal party is almost completely slaughtered – Marie Antoniette herself is torn limb from limb by the savage undead – and the only survivor to come galloping into the grounds of the Palace of Versailles in the splintered wreckage of a cart is Albert.

As shocking as this event is, the French authorities are only more fearful of its wider consequences – never mind that there are zombies in the woods, to tell the Holy Roman Emperor that his daughter has been killed thanks to slipshod security just as she entered France even threatens outright war. So, France turns to the survivor Albert. Albert is a fey-faced, androgynous fellow and despite being male still has a remarkable resemblance to his deceased sister – thus it is proposed, for the sake of preserving the European alliance, that he pose as a woman and pretend to be his sister, going ahead with the marriage as Marie Antoinette would have done. Prince Louis himself is willing to accede to the sudden change in bride for the good of France (and in reality it took him and Marie Antoinette eight years to consummate their marriage, so there’s not too much trouble in bed anyway) but will Albert be able to cope with the sudden promotion to prince(ss)? The court of Versailles is full of scheming and conspiracy, and let’s not forget that there are still animal packs of “Mort-Vivants”, steadily encroaching on civilisation despite the best efforts of the French chevaliers to contain them, along with forces both malign and divine whose plans Albert may have been interrupted. How long can Albert keep up the masquerade – and what is he himself thinking behind that mask of powder and rouge?

Versailles of the Dead is the latest project from Kumiko Suekane, and while a European historical zombie apocalypse might seem to be a departure from manga norms it still has a significant number of links to the wider medium. The style is immediately redolent of her earlier series Afterschool Charisma, which featured young clones of historical figures living together in a chateau, and it keeps up the somewhat desperate tendency of continually namechecking famous faces. The appearance of court conjurer Cagliostro (although Kumiko keeps to her strengths and depicts him as a coffee-skinned bishounen nothing like his historical self) is perhaps understandable given the story’s link to magic and spirits, but having another villain be a child Napoleon Bonaparte is just taking the mickey.  When Joan of Arc shows up yet again (in what must be her 1,946th manga role) despite being 300 years out of her time I was rolling my eyes! Still, I can’t judge too harshly, there’s not too much point in writing a historical story if you’re not going to make use of it, and one actually quite interesting use of the setting comes from how the magical gemstones being sought by the characters are actually part of the infamous jewellery involved in the real-life 1780s “Affair of the Diamond Necklace”, a public scandal which critically damaged Marie Antoinette’s reputation and is considered to be one of pebbles starting the avalanche of the French Revolution. It’s not an obvious shout-out but it is a rewarding little reference to be noticed by those paying attention.

While the gender-swapping cross-dressing antics might seem bizarrely out of place, an ill-fitting and discordant addition on top of a bloody zombie horror, it makes sense when you remember that it’s a tradition of costumed period manga from characters like Lady Oscar in the shoujo classic Rose of Versailles to Eon de Beaumont in Le Chevalier d’Eon (which does not seem to be referenced much nowadays but received a heavy multi-media push as a high-profile title in the mid-2000s). Despite Marie being a drag queen as well as French Queen though Versailles of the Dead goes against the grain of modern manga and has very little fanservice to speak of, and what is there is exclusively male – Albert bathes in a bonus chapter at the end of volume one, and Napoleon is a growing lad and, uh, could do with a size up for his school-shorts,  but other than that there are really none of the wardrobe malfunctions that decades of harem manga have taught us to expect in these scenarios.

Kumiko Suekane’s art is strong. Backgrounds and clothing are detailed – an essential quality among the painted ladies and tea-parlours of Versailles – and characters are also very expressive, from the piercing threatening stare of Albert as he reveals that wearing a dress has not inhibited his swordsmanship to the courtesan Madame du Barry’s strained, lemon-bitter stung smile as she struggles to maintain her composure while the ladies snicker at her behind their fans. King Louis and Prince Louis are drawn relatively realistically but while it doesn’t match the other characters who have more familiar manga-style big eyes but the surrounding detail is high enough that they don’t look too out of place.  The “Mort-Vivants” are not the most gruesomely putrescent zombies I’ve seen but they still have enough chalky texture and sunken hard-edged bone ridges to communicate their sallow pallor even in a black-and-white manga. Unfortunately though, the manga art does have one glaring fault, in fact exactly the same one which spoiled the big reveal of the first zombie in the opening volume of I Am A Hero too – big double-page splashes of leering demons almost can’t be properly seen because the art is carved up by and sunken into the spine of the book. It happens in both volumes, and the first one is a particular problem as it’s not just an action money shot but a key revelation about a character’s identity it sticks out like a sore thumb. Seven Seas really should have just turned this image on its side to fit in one (I appreciate that it’s a bit inelegant, but Western comics do it and at least we’d be able to see the actual picture) or had a fold-out page to make room for the full spread.

Versailles of the Dead oddly enough has another link to Defoe in that there’s more going on than a simple zombie plague and it’s just one symptom of angels and devils taking an interest in human affairs. The stakes have not been ratcheted up too high too soon (this isn’t an apocalyptic scenario, the zombies come in irregular irruptions which the chevaliers then stamp out, while outward society continues as normal) and there’s a decent amount of zombie-hunting action in these two volumes (and the chevaliers heft great-axes for lopping off heads at a stroke, which has a big impact), and Albert-as-Antoinette manages to impressive to wield a sword while still keeping his umbrella dress on and without needing a Murder Princess thigh-exhibiting leg slit. I am a little hesitant about how future volumes will develop – if you want a night-stalking horror with blood as dark as dusk it remains to be seen whether Versailles of the Dead will leave that by the wayside as the second volume ends with characters practically going Super Saiyan and zapping divine energy-bolts at each other. For these two volumes though it’s an entertaining bloody ballroom dance through a tumultuous France.

7
Ruffs and cuffs, lace and crepe, it’s a lot for the living dead to tear through.