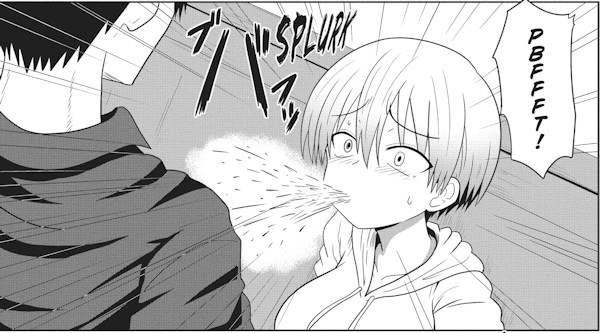 Uzaki-chan Wants to Hang Out has achieved notoriety on twitter thanks to the titular Uzaki headlining a Red Cross blood-drive in Japan. The twitter storm-in-a-teacup made the news on other outlets (we don't tend to report silly outrage stories for clicks) but it did at least bring the series to our attention, and subsequently the manga has an extra sale under its belt.

Silly seems a fair description of the manga too - it's entirely harmless fluff, simply the adventures of a normal guy plagued by the attention of an overly familiar classmate with a lack of social etiquette and an abundance of other assets. Back in the day this would have been labelled as a pretty mild ecchi, similar to many we've in the past. Nowadays it tends to be maligned as something shadier. Perhaps in a similar vein to the Rising of the Shield Hero, your enjoyment of the series will be entirely dependent on your politics. So if the idea of a large chested 19 year old offends, just smile and move on and maybe give this one a miss.

I think you'd be missing out by doing so. What works so well here is the constant double-act that the pair take to the road - there's little set in the college campus, minimising the supporting cast and giving the majority of the focus to our two leads and their interactions. The short nature of each chapter prevents the gags or situations becoming stale, and despite the annoyance Uzaki causes, she's hard to dislike. Bright, playful and dedicated, you can understand why the object of her affection, Sakurai, rolls his eyes when she appears, but also appreciate the affection he shows her despite himself. He wants to be a shut-in, but secretly enjoys the social interaction she brings with her. It's a cute pairing, and the chemistry is enormous fun to follow.

Take's artwork is lovely, though not complex. The majority of the book focuses on close-ups and expressions for its humour, though there is detail when called for. Again, a lot of this detail is in service of sexualised images, so be warned if you're of a sensitive disposition or not a fan of such things.

Uzaki's no victim though - her sharp wit and observational humour are often at the expense of her senpai, quite rightly calling him out on some odd behaviour. When the tables are turned, it's only because shes the author of her own downfall (unfinished homework, stuck in a bush etc) which usually causes more trouble for Sakurai than herself.

If there were any doubt about the ecchi content of this book, it's dispelled before you even open it -  the cover is embossed in such a way as to give Uzaki's ample breasts a slightly raised profile. It's a bold and cheeky touch that borders on perverted genius - a subtle note of intent that's going to amuse some and infuriate others.

Ultimately this is a series that will divide opinion. Personally I found it a witty read with some cheeky asides and charming artwork in a fairly traditional Japanese style. It's girl-trolls-boy for the ecchi crowd.

8
The sort of annoying friendship that feels genuine. Silly fun in the best way.