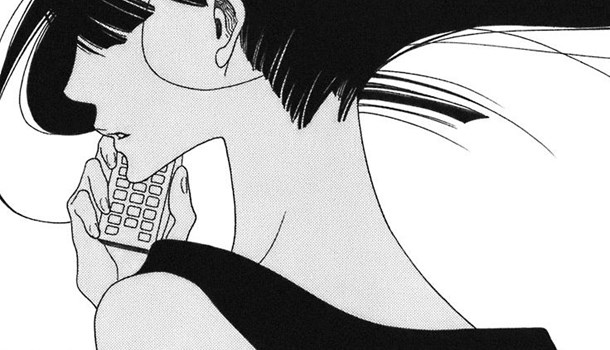 You can’t beat a good crime thriller. I spent too much time in front of the TV as a youth watching Frost/Morse/Taggart and drinking in the mysteries playing out on the screen. Someone mentioned Utsubora to me in the same sentence as “crime thriller” and I was off to the bookstore to get a copy. The striking cover and artwork didn’t hurt its chances either, and in particular the fact that this is a single-volume work. The very strong introduction and creeping dread that steals over you as you start to read certainly doesn’t hurt, either.

Utsubora starts with the suicide of a young woman. Her only possession is a mobile phone with two records - that of a middle-aged author, our main character, and a woman who is strikingly similar to her and who introduces herself as the deceased’s twin sister. The police are stumped by the case. The author, however, is in knots - this striking twin sister knows a lot more about him than should be possible, including his most shameful secret. Fascinated and mortified by the attractive woman in equal measure, the author pursues her as his life threatens to unravel around him - the police have not given up hunting for the truth and neither has his agent, his friends, and his family, each with their own suspicions and frustrations with the agent and the woman.

Utsubora is a taut, intense thriller that very quickly grabs you and holds you within its merciless grip. The tension you feel while reading is almost painful in its intensity, dragging you deeper and further into the book. Things come at you from all sides, wrapping you up in a whirlwind of mystery, relationships and threats both real and perceived.

While the primary focus is obviously on the main character and how he has gotten in too deep, there is no true respite in the rest of the cast as they also have their own skeletons in the closet they are trying to keep firmly locked away. These vary wildly in both scope and efficacy but they work well to help ratchet up the tension. Every page and action taken wrenches you this way and that as you hop from viewpoint to viewpoint, everything interweaving and colliding together in a wonderfully unbearable mash of fear and panic.

You can forgive a lot of the smaller niggles while reading such as the loose ends and abrupt shifts, due to the driving pace and harrying fear which pushes you along through the book even while it is freaking you out. I’ll admit that at some of the more strained points I was putting the book down to decompress quite frequently to prevent the feeling that my head was exploding.

Utsubora cast a magnificent spell over me for three quarters of the book until it was rudely dispelled, leaving me with a small pile of pages left to read but no burning desire to plough through them. It was honestly a shock to the system, much like falling out of bed and hitting the carpet at 3AM. It was cold and lonely, and I carried on reading waiting for the book to grab me again but it sadly did not. The problem with the book for me, and it has taken no small amount of thinking about this to figure out, is that towards the end all of the existential threat aimed at the main character(s) is taken care of or neutered in some fashion. Sure, there are still interesting mysteries to unravel and complicated relationships to unpick, but without the previous pervasive element of imminent mortal danger the story felt flaccid. By the time I put the book down I had a nagging feeling of disappointment, which has remained my lasting impression due to the massive gulf in enjoyment between the initial majority of it and the closing chapters.

While it may be exacerbated by the above, the ending of Utsubora felt somewhat rushed and untidy - I felt like one too many of the details were left unrevealed and as a result the plot reveals didn’t click into place with the same ease and impact that could be felt in the earlier part of the work. Even after repeat readings to make sure I was not being unduly dense it still felt like there was an item or two missed out that would have revealed the full range of the plot. Unless I’m just an idiot, of course.

Asumiko Nakamura does some amazing work with the art in Utsubora, lending a lot of the previously discussed tension through easily overlooked but still keenly felt techniques, the key one for me being eyes. They are used very powerfully to provide insight to the characters - in one particular instance showing you unfathomable, endless pools of black, drawing you in over a short sequence of panels. I know that it is an overused thing to mention - that the eyes are the window to the soul - but they really are magnificently rendered and a very striking part of the series. The rest of the art is no slouch, communicating body language, setting and most critically tension with an effortlessness and power I have seen only rarely before. It’s striking, impactful, and wonderful to drink in. The art does have the odd slip however, particularly when character’s proportions just cross the line between stylised and “whoa, legs should not be that gangly, what is going on there?” These small spell-breaking moments are thankfully very few and far between.

Utsubora leaves me feeling very conflicted - the majority of it is an amazing read that utterly consumed me and kept me pinned to the sofa, turning pages like a man possessed. Then suddenly it wasn’t and its flaws became worryingly apparent. I wanted so badly for the book to grab me again, to enthrall me, but it simply didn’t, and then it ended in a rather flat manner. It is hard for me to recommend without caveat as a result, but I honestly think the strength of the book when it is firing on all cylinders is worth a look.

7
A wonderful, taut mystery let down by a weak back third.