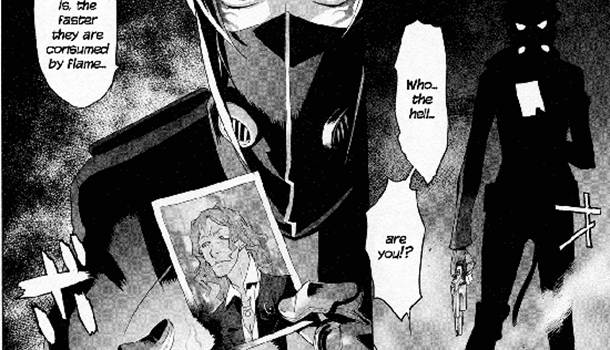 It unfortunately seems that Rigor Mortis is beginning to freeze up into Highschool of the Dead, but that manga's readers need not despair - while the Dead may be dying, it lives on in the artist of that series, Daisuke's brother Shouji Sato, and his follow-up manga Triage X.

Triage X is a medical drama.... and no-one's suffering from lupus. The vigilante band of the Black Label Organisation is treating West Side Story's 'socially diseased' - promoting the healing of the agonising running sore of a sick community by... 'surgical debridement' of the slough suffocating the wound bed. The bacterial colonies and cancerous cells of criminals, thugs, gangsters and drug pushers are being excised - by bullets, bombs and swords!

Volume two of the manga is introduced with a character roster but no story-so-far synopsis, launching straight over the edge of the cliffhanger that the first volume ended on, with Mikoto's rendering first-aid to the wounded Inspector Tatara being mistaken by the detective's partner Konomi as a merciless villainess preparing to administer a coup-de-grace to a downed cop. It's exactly the worst time for a potentially fatal misunderstanding to arise, because the building is still crawling with Masaki's bravos and they have fortified the place precisely to make a bloody example of the Black Label Organisation...

Part of the reason I mentioned Highschool of the Dead at the start of this review is because Triage X is very much its spiritual successor; the same artist exports the same style in the same vein of action-adventure - if you've already been an avid follower of Sato's other mangas, you will immediately be at home here. The ante is upped from volume one, however - now that the adversaries in this manga have more mobility and more weaponry than Highschool's zombies the action is made even more outrageous and extravagant. Sato's lanky bodies already engendered great movement, stretched like a boxer's jab occasionally chiselled with a sinister edge; the first volume hinted at wound-up potential energy as those long arms wound back with Mikoto and Arashi's biker stunts, and now in the new volume it's unleashed with wild vehicles, extreme acrobatics, crazy gadgets, bizarre hairstyles and powerful explosives. It does mean that the manga abandons even the most slender lip-service to realism, but the result is undeniably visually spectacular, particularly during the vehicle combat sections where Sato's accomplished technical rendering is lovingly shredded by firepower...

...and, uh, especially during the hot-springs scene where Sato's fantastic visions of the female form are lovingly lathered in bath oils. It's getting a biiiiiiit daft, even for him.

That makes it an appropriate time to consider the writing that creates such situations. The lighter segments are either bouncingly buxom comic relief (although the assets of Arashi's comrades in the Black Label Organisation amusingly inform his sober sombre detachment when he blinks blandly past his hormonal classmates and their pin-up magazine) or standard cuteness from the pint-sized Hinako. The baddies (it's the only word for them) remain foils, murder-molestor-stoners who can be cut down with impunity - even the new drug they're pushing is designed to make abusers ultraviolent. It isn't all just grunts of pain and groans of pleasure, however - the Black Label Organisation's blockbuster action scenes aren't just for the reader's enjoyment, and they're beginning to receive some scrutiny with the suggestion that there are other forces moving in the darkness around them, reassuring readers that future volumes aren't just going to be hit-of-the-week affairs and promising some intrigue (although I'd hardly call it worthy of Le Carre).  However, the introduction of a new lone-wolf vigilante is clumsy - her arrival is very dramatic, true, but why are the Black Label Organisation fighting her when she's in the same business - indeed, hunting the same targets? Are they just jealous about losing points to a kill-stealer? Their conflict is very forced and unconvincing.

An interesting part of the script comes from the hero Arashi himself. Normally when an anime hero is called upon to fight and kill, we usually see some soul-searching - more often, outright angsting - almost as a sort of hang-dog self-excusing ritual before he condescends to defend his family and friends. Arashi, however, is different - when confronting one of the villains, he gives a confident speech of his certainty in the justice of his cause, his belief in evil, and his determination to see it punished. It's rare that we see a hero not vacillating, and the argument he makes to establish why his violence and killing is substantively different from the enemy's torture and murder might not stand up in an international ethics conference but it does have an internal logic to it to make it credible. Arashi's own self-justifications strengthen the story's backbone, but I feel they would be more impressive if the translation didn't feel bitty and stilted in this segment.

Some of the above may seem similar to comments that were made in my review of Triage X's first volume, and that's because volume two continues on very much in the same vein. If you enjoyed volume one, you will happily continue on; if you're curious about getting into the series but missed out on the first volume, while there are no real concessions to newcomers it's reasonably straightforward enough to pick up the threads as you go along, If you disliked Shouji's art and subject matter Triage X makes not even the slightest effort to accommodate you, although you may give the manga a flick through on the shelf to see that the writing isn't entirely as superficial as you might expect. Altogether, Triage X continues to administer the same dosage of cars, chicks and cannons - it won't purge you of disease but like a Lemsip it's warm and comforting in its own way.