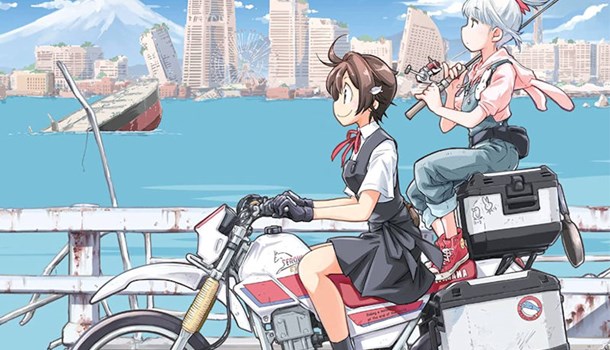 I'm a sucker for a well-crafted end-of-world tale, and Touring After the Apocalypse put me in mind of Girls' Last Tour - an engagingly upbeat cast of two exploring the remnants of humanities folly, and this is certainly what we get here.

Youko is following in her sister's footsteps and visiting all of her favourite places, albeit after whatever folly annihilated the entire population, and only the wreckage remains. Aided by her cyborg companion Airi, the pair must navigate the remaining dangers, find food and keep their beloved electric motorbike charged in order to cross Japan and find the points of interest left like breadcrumbs for them to follow.

As you might expect, there's a real melancholy to proceedings. Youko's youthful exuberance and excitement at finding so many wonders along their route is in stark contrast to what we, as readers, understand has been lost to achieve them. Tokyo Big Site stands partly flooded, the doujin of a fan circle the only remaining item of interest, with it's defiant intent to publish until the end of the world having come to pass. A human downloaded into a mechanical body joins the girls for a short spell, before recovering the memory of his family and choosing to stay in the city, his ultimate decision to power down and throw himself into the sea in grief at the loss of his family remaining unknown to the travelers, who are giddy to have simply enjoyed some fresh company for a while.

It's quite the depressing read in truth, with Youko's energy really being the only element of joy in the book at all. Flashbacks via Youko's dreams or the blog left by her sister are really the only time we see what was lost, but we already know the vibrant life Youko will never experience, making her adventure all the sadder. An element of optimism at the end of the first volume provides a glimmer of hope that life may sustain somewhere, but given the overall tone of the book, it seems unlikely that happiness awaits in volume 2.

The artwork is an important factor of conveying the devastated landscape and futuristic technology discovered by Youko, and I'm happy to say that Sakae Saito's artwork is utterly sublime. Detailed, beautifully realised and full of interesting ideas, the author's take on a decimated Japan is both beguiling and terrifying, just as it should be. The interaction between the two leads is engaging and entertaining, bringing a much needed layer of humanity to an otherwise dystopian nightmare.

Many people have a fantasy of being able to freely wander in and out of buildings and areas of interest, the ability to drop in or snoop on the way others live or have lived - it's one reason tours of royal houses and historical buildings remain so popular - yet seeing it borne out in such detail within these pages may make such fantasies far less appealing. Better to see it in fiction that reality, and to that end, Traveling After the Apocalypse is both fascinating and depressing in equal measure.

8
An upbeat tour of a melancholy landscape, it's a fascinating if ultimately depressing insight to one possible fate for humanity.