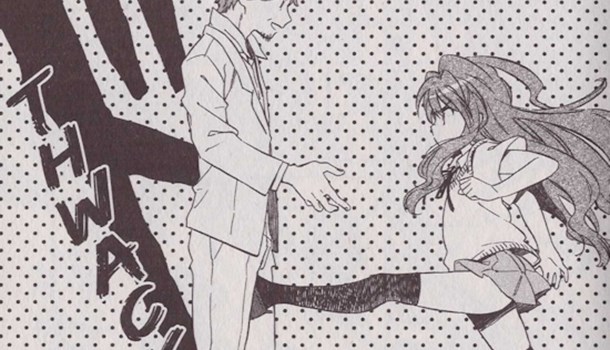 Thanks to their catching up with the releases of tankobon volumes in Japan, we've had to sit and wait patiently (or impatiently more likely, given its quality thus far) for another volume of Toradora to land on our doorstep. However, that sixth volume is now upon us courtesy of Seven Seas Entertainment, allowing us dive headlong back into the lives of Taiga, Ryuuji and company.

After a decidedly sedate fifth volume that focused more on our group of main characters including in beach-side fun and frolics, we return to reality with a bump in this latest instalment of the series, albeit again one framed with the prospect of fun aplenty in the form of another staple of any high school story - the culture festival. In the midst of the usual slew of haunted houses, cafes and the like, our class of focus manages to - albeit through an accident of democracy - offer up a pro wrestling show as their cultural festival fare, within which it is quickly decided that Taiga and Ryuuji should play the "baddies", pitched against the wonderful class idol that is Ami as their arch-rival.

So far, so fun, but the build-up to these events are overshadowed by the return of Taiga's father into her life - having been the reason for Taiga moving out and living alone despite being ill-suited to doing so he seems keen to rekindle his relationship with his daughter in a big way, and before he knows it Takasu is roped into his attempts to get closer to his daughter again. Having never really known his father and lived with the regret of this very fact, this seems like a perfect chance for Taiga to regain some familial happiness in Ryuuji's eyes, but Taiga herself is decidedly cool on the idea, while best friend Minori is apoplectic with rage at Takasu's interference for reasons which slowly loom into view as we reaches the climax to the volume.

What a cruel climax it is too, leaving us hanging at a pivotal moment for a number of characters as things look set to come crashing down around at least one of them - then again, the fact that you're left scrabbling to find additional pages that aren't there speaks to the fact that this yet another wonderfully realised volume of Toradora - when its moments of drama come they are like the slap in the face they are clearly intended to be, but the contents on show here never forget their requirement to serve as entertainment which flows through the pages in the form of lots of humour, snarky one-liners, asides and visual gags which drive events forward at a substantial page. In other words, this volume will be over before you know it, leaving you hungry for more but with a long wait until you can get your hands on it.

In terms of art style, Toradora continues to be the poster child for "don't judge a book by its cover" - ignore its cover art scrawl and inside the series art continues to walk the line between cutesy, comedically bad (in a deliberate way) and evocative and really looks the part, even if its reliance on "bad drawing as comedy" is sometimes leaned on a little too frequently. There are a few rough edges in the English language translation here, with colloquialisms that feel a little out-of-place in a couple of places, but for the most part it feels both natural and proficient.

In a year which will see Toradora finally (finally!) reach the UK in its animated form courtesy of MVM Entertainment, more of the series is always welcome in any shape or form, and this continues to be an equally enjoyable version of events to check out as its anime counterpart. Unless you're a massive fan there perhaps aren't enough major differences between the way its story is told to consume the series in both of its forms, but if reading manga is your primary source of entertainment then Toradora remains a must-read, and a romantic comedy with just enough bite to match its bark to ensure that you absolutely should check it out.

8
This series returns to top form again with this volume - you'll laugh, you'll grit your teeth, you'll start pacing up and down waiting for the next instalment.