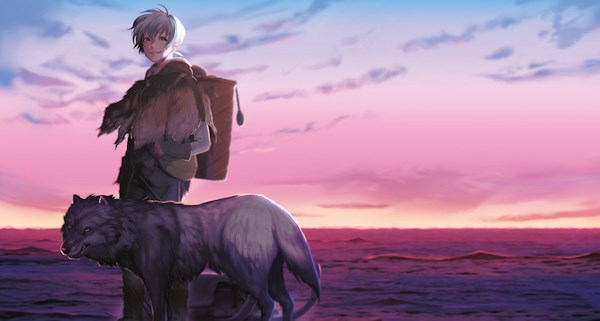 To Your Eternity is created by Yoshitoki Oima, the talent behind the worldwide smash hit A Silent Voice. What's most remarkable is that she was only 18 when she started work on the tale that would go on to be nominated for an Eisner Award. So when a new title with her name on it lands on your desk, you read it!

As an aside, there's a terrific interview with the author on Kodansha's own website, which is well worth your time when you're done here!

To Your Eternity couldn't be further removed from A Silent Voice conceptually. It focuses on an immortal entity that is sent to Earth by an unknown narrator. All we know is that it can take any form and that it cannot die - no motivations are cited, and indeed the casual, observational narrative that accompanies the story is both clinical and detached.

The entity begins its stay on Earth as a rock. It then changes to moss, before circumstance delivers a dying wolf to it's vicinity, and upon expiring "it" becomes the wolf and wanders off into the world.

I don't want to place any spoilers here, as the book deserves to present it's own course to you page by page, but in the round there's a "Kino's Journey" feel to the book, in so much as the entity travels without purpose other than to learn and grow. It has no significant attachments and the human drama that unfolds around the entity are viewed as part of it's growth and nothing more (for now).

To Your Eternity is a beautiful book - the artwork is expressive, detailed and clean. Backgrounds are plentiful and very well done, with a depth and life of their own. The feeling of melancholy on the first adventure is palpable, and the follow up tale has moments of humour, danger and mythology that showcases the amount of range the concept has to offer.

Overall then, the book looks stunning, has a unique tale to tell and seems willing to move between locations and characters on a whim, adding an element of unpredictability that is both refreshing and exciting. This is a thought-provoking read, which examines humanity from a distance - it's one of those stories that works exceptionally well in the manga environment, and it gets an unreserved recommendation from me.

10
Utterly riveting tale by one of the modern masters.