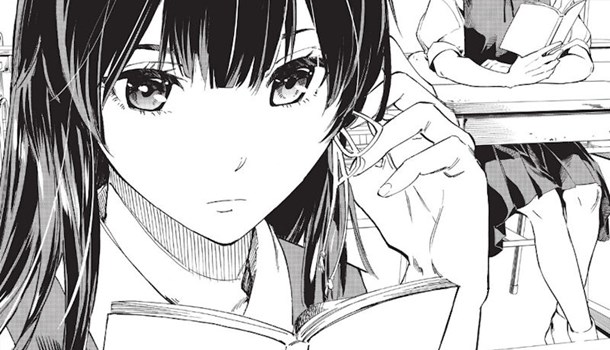 Set during a hot summer in a remote Japanese town, The Tunnel to Summer, The Exit of Goodbyes: Ultramarine (which we'll refer to as Ultramarine going forward for brevity) is a supernatural mystery involving high schoolers and a tunnel that has the ability to grant wishes to those who enter at the cost of time itself. Originally a light novel, and due to be released as a feature film by CLAP next month, the story has garnered a lot of attention and clearly the publishers have a great deal of faith in it.

Like many of the most timeless stories, Ultramarine deals with desire as its central element, a human condition that drives us above all else. In the case of Kaoru, it's the desire to see his little sister again in a bid to ease his overwhelming guilt over her death. While we don't yet know what drives his other classmates towards the tunnel, it's clear that the desire to effect change is at the heart of their stories too, and this makes the book both compelling and relatable.

Kaoru makes for a wonderful lead character - while he's dealing with the heavy burden of his own emotional baggage, there's no spite or lashing out, just a calm acceptance of his own existence, even if it's clear that under the surface he's dealing with depression and a certain level of dissociative disorder - this might explain his lack of concern over his role as a doormat for the class bully, so called "Queen Bee" Kawasaki. Despite this, he's still quick to show concern for others and share a joke with his classmate Kaga. Kaoru is a likeable young man despite his trauma.

The final member of the principle cast is transfer student Hanashiro, who initially shares a lot of traits with transfer student Fujiko from my last manga review, Nightfall Travelers. Smart but introverted, she quickly establishes herself as anything but a doormat by standing up to Kawasaki and even punching her in the face. As such, there's a feeling of real stakes even outside of the supernatural tunnel that I've barely even mentioned up to this point.

Acting as almost a fifth character in its own right, there's real personality to the "Urashima" tunnel, so-called for the effects it has on time that are recalled in the folklore that features a character of the same name. The way in which it reveals itself - a glimpse of Kaoru's sister, hitherto unnoticed steps leading to its entrance and even the shrine gates hidden deep within, it really does have its own "voice" that lends it an eerie presence throughout the book. In many ways it reminds me of an Australian TV series called Children of the Dog Star, where an omnipresent and unusual looking weather vane mounted on a farm shed watches the local children and influences events.

The manga's pacing is spot on, introducing elements relating to the central mystery, the cast and the locale in even beats, so no matter what's being revealed, it fills in a patchwork that drives the story forward. This is aided by some stellar artwork from Koudon, who uses shading to an impressive degree that adds a level of depth and drama to events that reads like a carefully crafted movie storyboard. There's no ambiguity, rushed panels or muddled progression, it's perfectly laid out with wonderfully emotive characters, creating an engrossing atmosphere that gets the pitch absolutely spot on, page after page.

Ultimately this reads like a Makoto Shinkai story, so take the comparison as the highest form of praise I can offer for a book in this genre. A rare perfect 10, and richly deserved.

10
A mystery with sublime pacing and engaging character development. The perfect Summer read.