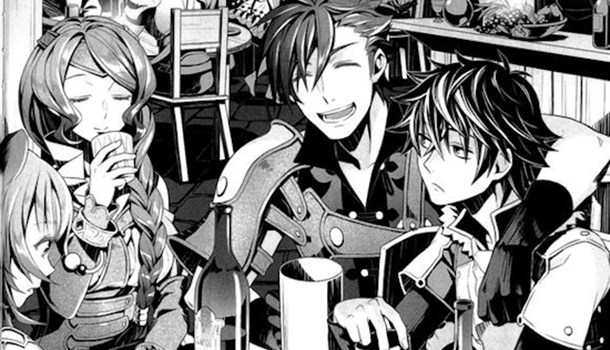 The Rising of the Shield Hero is an Isekai (average person sent to a fantasy world) manga, whereby average otaku university student Naofumi Iwatani is sent to Melromarc, a country in a fantasy parallel world. Upon arrival he's greeted as one of four heroes of legend, The Shield Hero, though his reception seems a little off compared to the other three; Lance, Sword and Spear. When local adventurers arrive to travel with each hero, Naofumi is crestfallen when nobody chooses to travel with him. Out of pity, a young woman named Myne agrees to become his ward in order to level up, but all is not as it seems.

This series, be it the original light novel, anime or manga, has become somewhat infamous here in the West due to what follows. After the first successful day of levelling up, Naofumi awakens to find his money and equipment removed, and his door broken down by soldiers who arrest him for raping Myne. It's made very clear that this is a set-up, and Naofumi is justifiably distraught and angry - the frustrations of an innocent man being accused of such a despicable crime is writ large throughout the book. Word is spread among the populace of his criminal actions, and despite the fact he is convicted, his role as a hero must be fulfilled and he is allowed to go free.

Since nobody will travel with the Shield Hero, he resorts to buying a slave from a dubious dealer that seeks him out. His lack of funds restricts his choices, and despite making it clear he would want a male slave, he ends up choosing a ragged young girl out of pity. Raphtalia is a demi-human (part racoon) and her type is deemed second-class in this new world. Although initially hostile to his charge, even going so far as to punish her for not following orders, his underlying character is decent and so he starts to treat her with more respect as he learns more of her circumstances and his bitterness abates.

Raphtalia's parents were killed by the first wave of monsters that attacked the country, the very incident that necessitated bringing the heroes together in the first place. She's timid and has nightmares, but through Naofumi's assertion that in order to survive she must learn to fight with him, becomes more confident and eventually begins to admire the scary Shield Hero (whose predecessors in legend have always treated her people more kindly than most).

I'm reminded somewhat of the Penhaligon Trilogy of books by D.J Heinrich, wherein an experienced but disgraced Knight named Flinn, who has been manipulated by a Dragon named Verdilith into shame and exile, teaches a young runaway how to fight as he gains his own redemption. In fact, there's very little that's unusual about the Shield Hero story for its genre aside from the false rape accusation and slavery angle.

Let's deal with the former first. In the same year that If Beale Street Could Talk wins an Oscar for a story revolving entirely around a fake rape accusation, there has been huge uproar by certain circles as to its inclusion here. This is not something that the Japanese market has focussed on, and it's shown in later volumes that there's a lot more going on here than meets the eye.

You have to make your own decision as to how the story affects you, but as someone who lived through a similar incident in my own family (minus the fantasy trappings, obviously) I've no personal issue with it. I remain entirely accepting of the fact that others may feel differently, and here it's a personal decision for each reader.

The slavery aspect is shown to be deplorable within the book. Naofumi is initially working through his rage and thus he treats Raphtalia poorly before coming to his senses. By the end of the first book, Naofumi and Raphtalia are bound together through common purpose and mutual understanding, not an owner/slave dynamic. By learning to understand Raphtalia and treating her with respect, Naofumi reclaims some of the humanity he himself so recently lost, and by the end of Book 2 she comforts him to the point he cries until morning just by virtue of her kindness.

At the begining of the second book, Raphtalia has clearly grown into a more mature shape (by nature of her levelling up, a similar mechanic as used in That Time I Got Reincarnated as a Slime) and has a far more casual relationship with Naofume. While the slavery issue will continue to play a part in the books, it's not an abusive relationship, nor as far as I can see, any kind of endorsement of slavery - in fact it's quite the opposite.

During book 2, following the second wave attack during which only Naofumu protected a nearby village, a feast is held in honour of the victory for all four heroes. Upon finding out Raphtalia is a slave, a duel is fought to free her from Naofumi's "wickedness". The Shield Hero loses due to interference, but once the slave seal is removed from Raphtalia she makes a speech about how Naofumi took her in, spent his own money on her and cared for her when she was sick. She chastises the arrogant Spear Hero for his assumptions, and then asks if he would deign to reach out to a dirty, damaged slave and do the same. He replies that of course he would, at which point she asks simply; "If so, then where are your slaves?"

It's a solid piece of writing and a point well made. He has the money and the influence to free any slave he wishes, and yet has never thought to do so. It's a fantastic "mic-drop" moment.

A much bleaker view of slavery can be found in the isekai series The Dungeon of Black Company, where slavery is a way of life for large sections of the population. Recently arrived from another world, spoilt asshole Kinji is enslaved by a corrupt mining company. His rebellious streak enables him to find a way to survive, but in doing so he abuses his fellow slaves even more than their masters, showing a psychopathic lack of empathy that dwarfs anything found in Rising of the Shield Hero. He also takes a bath with a 10 year old dragon girl, yet I've not heard a peep about it online.

And that's not to mention the proliferation of slavery throughout Game of Thrones.

The Rising of the Shield Hero works because it's a redemption story. If you take out the two elements some find problematic, it wouldn't have very much left to drive it. Naofumi is in an unwinnable position, his self-pity and anger are justifiable and it's only through his actions of self-sacrifice and empathy that he begins to find his way back. He protects those that condemn him, he prioritises others ahead of himself and he manages to find solace in a kindred spirit. Overall I'd say it's a pretty positive tale if you're open to it.

All of this leaves the book a matter of personal taste. It's a tale with far more political problems in the West than the East, granted, but it requires reading more than the opening chapter to truly get a feel for it. I'd recommend the book if your personal circumstances or beliefs don't make the idea unpalatable.

8
A difficult subject that can be rewarding if the premise doesn't clash with your tastes.