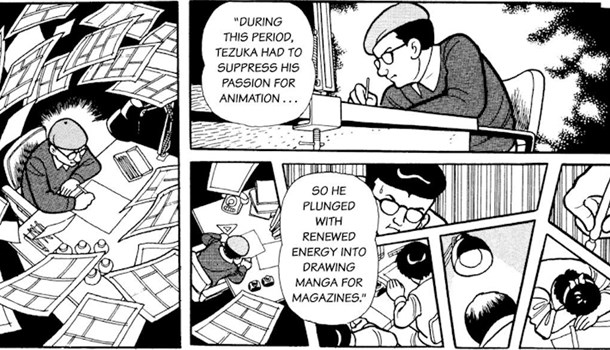 When it comes to the history of manga and anime, there are few names as important as Osamu Tezuka. As someone who reinterpreted what manga could be in the postwar period as well as laying the foundation for the modern anime industry, the legacy that he has left is unquestionable. Therefore, I think it's a shame then that so many fans and enthusiasts of both the manga and anime mediums know so little about one of the most important individuals in their history or, if they are aware of him, simply label him as "The Astro Boy guy". You can imagine then how pleased I was when I learned that a biography of Osamu Tezuka was being released in English titled "The Osamu Tezuka Story: A Life In Manga And Anime".

Written and drawn by Toshio Ban, a long-time manga assistant for Osamu Tezuka, The Osamu Tezuka Story chronicles the life of Osamu Tezuka from his birth until his death and is split between his childhood years, the years when he entered the manga industry and the years he began to produce anime. Toshio Ban, in a move similar to Shigeru Mizuki when he wrote Showa: A History of Japan, makes the interesting but pleasant choice to have one of Osamu Tezuka's most beloved characters Shunsaku Ban, known as Mr. Mustachio in the Western releases of Astro Boy, act as narrator throughout the book, giving extra details and exposition on the scenes as we read, a touch I found quite endearing as a long-time Tezuka fan.

Much of the early years is spent showing us the various influences that would inform Osamu Tezuka's style when it came to his work in manga and anime such as prewar manga, the Takarazuka Revue, international films including animation and Japan's first feature-length anime film, Momotaro: Sacred Sailors. We see the inspirations for many of his most popular characters such as Shunsaku Ban, Acetylene Lamp and many others, which as a Tezuka fan is quite a treat. We also observe how the war affected Tezuka such as the absence of his father, malnutrition due to rationing and the suffering he witnessed due to the constant air raids the Allies conducted over Japan.

The manga years are spent covering Osamu Tezuka's entry into the manga industry and showing us how different it was to today. The kashi-hon industry, a place where books and manga were rented, was booming after the war and much of Osamu Tezuka's early manga was made specifically for this market. Of course, the thing that made Osamu Tezuka's work stand out from all of the other mangaka at the time was the use of cinematic techniques. Influenced by his love of film, he introduced much of what he observed such as camera pans, zoom-ins and zoom-outs. This caused Osamu Tezuka's manga to become very popular with some stating that reading his manga was like watching a movie. However, it is also around this time that we begin to see what a workaholic Osamu Tezuka really was, working constantly for numerous magazines while also studying to obtain his medical degree.

Eventually, we see Osamu Tezuka establish Mushi Production, his animation company, and the development of Japanese animation for television. Due to competition with American animation, Osamu Tezuka was forced to develop various animation techniques in order to drive costs down, many of which are still used in anime today, while selling his shows to TV networks at a loss and relying on merchandising and oversea sales in order to make a profit. Tezuka also began making experimental short anime films in order to push the boundaries of the artform and eventually began producing feature-length anime films such as the Animerama films and Phoenix 2772. While he was working on all of these new endeavors, he continued to write an incredible amount of manga during this time period and even began to reinvent his works as he adopted several of the techniques developed by the then increasingly popular gekiga movement.

Even as a fan of Osamu Tezuka, who was familiar with his life prior to reading this book, I was taken aback at the sheer amount of new information that I learned as I worked my way throughout his biography. From the way that manga was distributed in the early manga industry to the many other mangaka that Osamu Tezuka encounters and befriends and especially his work on his experimental anime short films, I gained a newfound appreciation of arguably my favourite mangaka of all time and his impact on both the manga and anime industries. Toshio Ban handles this expertly, knowing when to let the story speak for itself and when to have Shunsaku Ban interject and provide us with some much needed exposition. He even cites his sources within many of the scenes, something I greatly appreciate and makes me wish that many of these sources were also translated into English.

However, if I had to make a criticism of this biography, I feel that Shunsaku Ban is too eager to show us the achievements of Osamu Tezuka and not his failures. Anyone who is familiar with Osamu Tezuka's career will know that, just like so many other creatives, he had his share of failures and one of the darkest periods of Osamu Tezuka's life was the early 70s when Mushi Production declared bankruptcy, his sales manager Yoshinobu Nishizaki had filed the copyright for the Triton of the Sea anime under his own name rather than Tezuka's and debt collectors regularly called on Tezuka who would have them wait in the next room while he worked on his manga. As a workaholic, we also rarely see the strain this puts on his family life with only one scene hinting at this. While I'm not quite as familiar with Tezuka's relationship to his family as his career, I would have loved to see more scenes covering his wife and children's attitude to his lifestyle, sleeping overnight at his studio constantly and going on trips to America, Easter Island, animation festivals etc. No matter how fascinating and enlightening the rest of the book is, I can't help but feel disappointed at what it omits. Granted, this book was written over the course of 1990-92 so Tezuka's death in 1989 was fresh in the minds of Japan and perhaps Toshio Ban, who'll I remind you was a long-time manga assistant to Osamu Tezuka, may have been hesitant to examine the failures within Osamu Tezuka's life. Nonetheless, the lack of these failures made the fall of Mushi Production, which I was aware of prior to reading this manga, quite sudden and jarring with little to indicate why it had failed in the first place.

The art within The Osamu Tezuka Story is quite fascinating to me as an Osamu Tezuka fan. On one hand, it's unquestionably similar to the artwork that Osamu Tezuka was producing later in his career with detailed backgrounds and wonderfully stylised characters, clearly a sign of Toshio Ban's work as Osamu Tezuka's assistant. On the other hand, it still retains its own unique style with character designs clearly inspired by Osamu Tezuka's art but not subservient to it. The result is a very pleasant looking manga which may look uncanny to Osamu Tezuka fans until they grow use to the difference. The Osamu Tezuka Story also includes panels from several Osamu Tezuka manga to convey to the reader the variety of manga that Osamu Tezuka was working on as well as the change in his artwork over the decades. It also incorporates shots from several animated films such as Momotaro: Sacred Sailors and Phoenix 2772 but these panels have a washed out, blurry look which stands in sharp contrast to the rest of the manga. While I'm still happy that these shots were included in the manga as they convey quite a bit of information, I do wish that they could have been integrated in such a way that they were sharper and did not stand out so much.

The Osamu Tezuka Story was translated by Frederik L. Schodt who served as an interpreter for Osamu Tezuka as well as translated several of Osamu Tezuka's works into English such as Astro Boy and Phoenix as well as a variety of other works from different authors. His translation is quite easy to read for the most part although I did notice an unusually high amount of typos within the book itself. While these typos aren't terribly common, they are frequent enough that I found myself having to reread certain panels in order to make out the meaning and impacted my enjoyment as I read. Besides that, Frederik L. Schodt provides a very informative foreword titled "A Word from the Translator" where he provides a lot of great information about Toshio Ban, how the manga was serialised in a magazine called Asahi Graph and even a moment in the manga where he himself is depicted. However, one of my favourite extras ever in a manga has to be the appendixes at the back of the book where it provides a year by year breakdown of Osamu Tezuka's work, broken down into a manga section and an anime section. The amount of information provided for each entry is incredible with the original Japanese title, an English title if there was one, in the case of manga, which magazine it was released in and even the date that it was released while anime has which channel it aired on, which animation studio produced it, the number of episodes and even whether it was in black and white or colour. The appendixes is truly incredible for any Osamu Tezuka fan and I've made it a point to return to it time and time again, even organising my personal Osamu Tezuka manga collection chronologically based on the dates within the appendixes.

In conclusion, while The Osamu Tezuka Story isn't as comprehensive as I would have liked it to have been, it still provides an incredible amount of information about Osamu Tezuka himself, his works and the history of the manga and anime industries. Besides the typos, Stone Bridge Press and Frederik L. Schodt have done a wonderful job releasing this manga for the English-speaking audience and I personally consider it a must read for any fan of Osamu Tezuka or any manga or anime fan who wishes to see the humble beginnings of the industries that they enjoy so much.

8
While not as comprehensive as I would have liked it to have been, it remains a must read for Osamu Tezuka fans and fans of anime and manga.