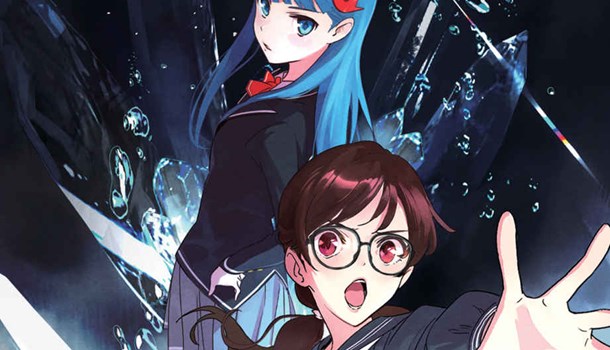 Three days have passed since the SFD had one of its toughest battles yet, but school doesn't call a snow day just because some murderous psychopaths are running amok, so Minoru Utsugi and the gang resume their everyday school lives. However, things take a turn for the unexpected when Minoru, average student he is, finds himself suddenly the 11th rank in his grade. Things then take a turn for the upside-down when Liquidizer, one of the strongest Ruby Eyes he's fought, comes to him with a proposal, leading to a temporary allegiance for a hostage-exchange of sorts.

The Isolator volumes up to this point have had slow starts, which made me frown, since they were of just Minoru goofing around with jogging at stupid o'clock or guzzling rice, but I must have matured as a critic, because I now realize these meandering segments accentuate the double-life Minoru leads as an SFD operative. By day, he's just a quiet kid who wants to be left alone, and when the final bell rings, he heads onto the streets and gives bad blokes a good walloping.

But even the juvenile critic me would've enjoyed the slice of his ordinary life this volume because of the mystery sneaking in at his school. Initially, I squinted my eyes in suspicion that this was just a poor attempt at turning Minoru into that much more of a badass all little boys should aspire to be, but whatever's up with him is bringing down the scores and athletic abilities of the school's top students. The intrigue got me super into this plotline and eager to see how these events churned out, so imagine my letdown when the main plot woke up from its sleep-in and waddled onto the scene with huge, thundering steps.

Titles are based on whoever the Ruby Eye of the Volume is, and volume 5 is no different, having Liquidizer as its headliner, but Minoru teams up with her rather than fights her, which makes for the most thrilling plot so far, since you don't know if she's a woman of her word when she promises not to turn the Jet Eyes into liquid goop. But this allegiance wouldn't be half as interesting as it is if Liquidizer herself wasn't an interesting character.

She's dangerous, not saving murder as a last resort, but she also plays mentor to another Ruby Eye, even exhibiting an almost maternal affection toward him. To boot, she's a terribly shrewd one, though that shrewdness ranges from dangerously frightful to dumb luck. For instance, she deduces the area Minoru lives in through assumptions made during his fight with the Biter in the debut volume, but to actually find him, she just stands around twiddling her thumbs until he happens to pass by. But that's a trait the two of them have in common, since Minoru will either offer insight on a matter even the genius elementary schooler hadn't considered or go cross-eyed when someone's explaining long division.

Adding to the complexity of the alliance between good guys and bad girl is the behind-the-scenes power struggle of the suits in charge of the SFD. It's only mentioned in brief, but in some ways it justifies the actions of Minoru and pals to momentarily betray the organization they're working for. I also want to believe it's foreshadowing a future conflict where the SFD rise up and overthrow their supposed betters, which the anarchist in me can get behind.

This is only the 5th entry into the series, but it reads like a much later addition, with the good guys teaming up with the bad guys, some of the good guys not being so good, and some of the bad guys not being so friendly with some of the other bad guys. It's the sort of material which makes you clutch your face in shock if you're just starting a series and read up on what happens later on its Wiki, so it almost feels like too good of a treat to receive fairly early on into the series's lifespan. The main plot's sumptuous enough that I forgave it for leaving the school mystery by the wayside, but once it wraps and tidies things up, before returning to its bedroom to turn in for the night, it weaves itself with the original plot thread, not concluding it but teasing at the next challenge for Minoru and his buddies to overcome.

I was thoroughly impressed with vol. 5 of the Isolator. I've liked the previous releases, but there's usually something or other holding them back I could rant and grumble about, but amazingly there's no such thing like that here. Well, maybe a little, with Minoru defying the laws of physics during the climax, but I'm already willing to accept teenagers with low-grade telekinesis, so what's one more disregard to the laws of the universe? Anyway, this is the best yet of the series, but given the author's track record, I'm worried this level of quality is an anomaly rather than the new standard.

A part-time reviewer these days of video games.