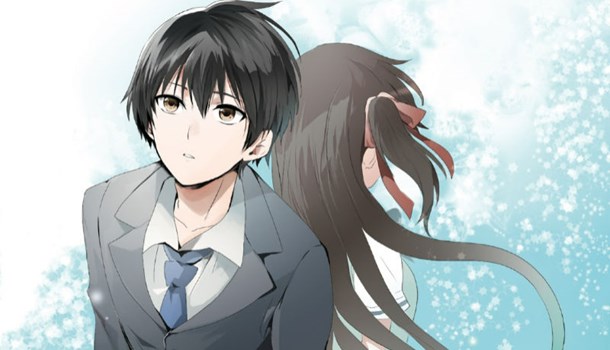 Kimihiko Kimizuka is a young man with a knack for finding trouble. Four years ago, aboard a hijacked plane, he met an ace detective named Siesta. Over the following 3 years, the pair worked to solve mysteries together... until Siesta died. A year later, Kimihiko tries to live a normal life, but an encounter with a young girl named Natsunagi, whose heart transplant has come with a desperate desire to find an unknown person, and only the ace detective's former assistant can help her.

I first saw the series on the shelf in its original light novel format, and while I liked the character designs, I don't read many light novels so waited for the manga I'd heard was coming. I'm starting to wish I'd tried the original instead, because the pacing and banter of this manga adaptation have not worked very well at all.

The book is topped and tailed by the event onboard a plane where Kimihiki first meets Siesta, before jumping ahead four years. Once we learn that Siesta died a year ago, and that the schoolgirl who tracks down Kimihiko had a heart transplant a year earlier... well you don't need to be a detective to see the connection, and annoyingly the first volume doesn't even resolve this most obvious of contrivances, making it a fairly frustrating read; there's no drama where there's no mystery, so why eke it out? The attempted resolution, meeting a man who has been locked up for years but has incredible hearing (and can recognise a person by their heartbeat) just seems so painfully thrown in that it's almost insulting - Death Note this is not.

I'm also baffled by the humour, which uses dialogue that literally lurches with no logical progression into amess of nonsensical sentences. Literally nobody talks like the characters in this book, which is just as well as we'd all be so utterly confused by what people are trying to say that we'd get nothing done. Whether this is the fault of the original prose or the translation I really can't say, but good grief is this a pain in the arse to read at times.

What just about saves the book are the side characters, with police lieutenant Fuubi Kase having a rough and ready charm that puts me in mind of a more agitated Columbo (probably her penchant for cigars) and the artwork, which is attractive and bold thanks to its use of stark blacks colouring to provide a literal darker tone to proceedings.

I'm hard pressed to completely write the book off, it's Randall and Hopkirk (Deceased) premise is a good one, and the use of pseudohumans with enhanced abilities adds some flavour and an element of unpredictability to events, but it really needs to settle down the dialogue and try to lean more heavily into some real mystery in order to make the best use of its premise.

6
While not "dead on arrival", the book needs to fix its terrible dialogue problems and lean into its unique setup in order to bring the story to life.