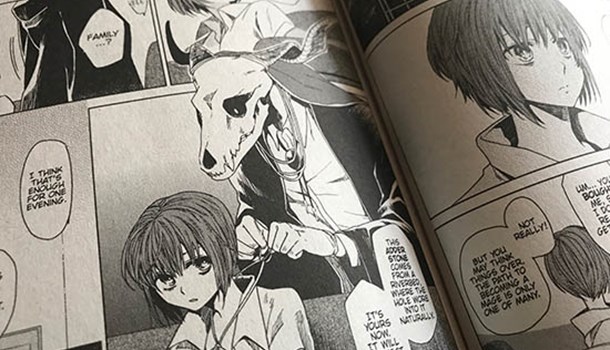 This manga tells the tale of Chise Hatori, a 15-year-old Japanese girl who was orphaned and then rejected by her other family members due to her unusual behaviour. The story begins as she is purchased for five million pounds at auction by an ancient mage – Elias Ainsworth. He then magically whisks her off to England and invites her into his home, just outside London. This instant trip to London shocks Chise and surprises the reader - there's no indication of where the auction took place, but since the auction was in pounds sterling you assume she was in England already, so her surprise seems a bit jarring. It could be a translation error or just a minor plothole, but's it's a bit distracting nonetheless.

Elias informs Chise that she is a "Sleigh Beggy", meaning that she posseses very rare powers that will make her a particularly powerful mage. He also tells her that he has not only purchased her to be his apprentice, but also to be his bride. Given that Elias is sporting some kind of ram’s skull for a head and that he has paid for her rather than asking her out on a date, you would expect Chise to run away screaming at the first opportunity. However, as Elias has treated her kindly and makes her welcome in his home (something that she has rarely experienced in her life), this leads her to quickly soften up to him. Initially, she believes that his idea of her becoming his bride is actually a joke...

This first volume introduces fairies, dragons, cats and several other characters that look like they will be key players in future adventures. The book moves at a great pace, still giving time to exploring the origins of the main character and ending on a cliffhanger that leaves you wanting to read on straight away.

The artwork is beautiful, giving depth and detail when necessary, but focusing in on just one character when the story requires it. The cover has stunning colour images, making it slightly disappointing that the rest of the illustrations have to be in black and white. Yet all is not lost, as this manga has now been adapted into an anime series, allowing you to see it realised in all its full-colour glory.

At first, I found it quite controversial and unnecessary that Chise is destined to be Elias’ wife. This is an element of the story that is obviously key to the title but could it not have been a tale of ‘The Ancient Magus’ Apprentice’? However, it is also crucial to remember that, in Japan, the age of consent is 13 (regardless of how uncomfortable we may find that in the west) and so for a 15-year-old girl to become the bride of an older man, albeit a potentially centuries older one, is not an unusual dynamic for manga. It is clear from what I have read up on the story going forward that the development of the relationship between the two characters will become more central to the story in later volumes so it will be interesting to see where that goes. After all, I am of the generation of teenagers that had our sexual awakening watching David Bowie strut about in obscenely tight pants whilst portraying the somewhat scary and domineering Goblin King, and this isn't far off that unsettling dynamic.

Overall, I thought that this was a great read, with lots of interesting characters, a fast-moving plot full of both action and character development and beautiful artwork. I certainly couldn't put it down until I had finished it. Part of me wants to go straight to the anime and devour that, but I also know that I won’t find it easy to get back into the manga if I do that... Dilemma! I will do my best to resist… for now!

10
An exciting and touching tale of a young girls’ introduction into the world of magic and mysticism. An absolute page-turner!