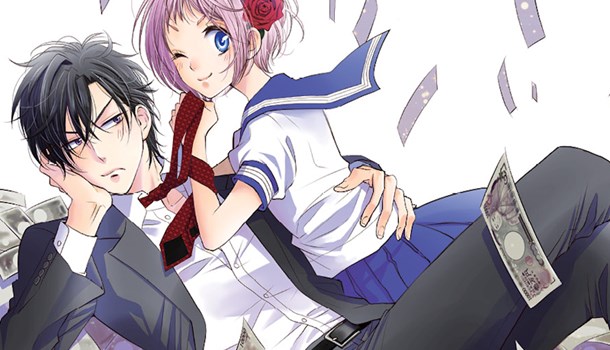 I've been reviewing manga for over 25 years now, and I've come to love Shoujo. Sure, it's targeted at girls, but I'm a big softie with a romantic streak, so it's become one of my guilty pleasures (much like Kelly Armstrong's Women of the Otherworld series). Sometimes though, I'm left baffled.

Takane is a spoiled rich douchebag, a supercilious brat with the personality of a doorknob. His uncle, the chairman of a major conglomerate, arranges a meeting with his employee's daughter to discuss the possibility of an arranged marriage after spying her on a corporate visit. However, the girl in question, Yukari, doesn't want to go, so younger sister Hana is forced to attend on the insistence of her weasel father who's angling for promotion. Between her selfish sister and crappy Dad, it's a wonder Hana is as balanced as she is. So, caked in make-up and hoping to fool everyone into thinking she's her older sister, poor Hana has to meet Takane, who immediately acts like a pig. And in all fairness to Hana, she throws her wig at him and storms out, declaring she has not even an ounce of interest in him.

And so of course Takane is now fascinated by her and turns up to her school(!) demanding a date.

Originally this manga was conceived as a one-shot chapter, much like Sweat and Soap, which features another oddball male protagonist. The end of the first chapter is the only part of the book that shows a crack in Takane's armour as he admits he's never met anyone who doesn't care about status, and Hana takes the initiative and kisses him. This would have been a great place to leave it, as it allows for some rehabilitation in the reader's imagination, but instead it resets into more dates wherein Hana makes all of the compromises.

There are arrogant jerks in all walks of manga, from the pig-headed Ranma to Fruit's Basket's Kyo Soma, but both of these characters are cursed, and even then they occasionally break the facade and show their caring side, neither being mature enough to say how they really feel unless they're cornered or in danger. Takane is cursed with being rich and is, without any seeming cause, an asshole at all times. Perhaps if his mother had married for money and shown no interest in their child, you'd get a sense of why he resents his lifestyle and women so much, but that's not really addresses. Perhaps in future volumes.

The constant second-guessing by Hana makes her less relatable too, as you can't help but wonder why any girl would put up with a man like this, even with his vast fortune. I can only put it down to some women wanting a man they can change, but Takane doesn't exhibit any signs of being able to or wanting to undergo any alterations. His goal, if he has one, is to break her. The only pleasure derived from the book so far is her telling him to shove it.

So ultimately I just gave up rooting for them because I wanted better for Hana. Even the 4-koma shorts at the back see Hana being put upon and having three kids every bit as awful and superior as her husband. If my daughter were involved with a guy like this I'd be absolutely devastated.

On a positive note, I liked the artwork.

So on this occasion my forbidden affinity for Shoujo has failed me - it's a romance I just don't get, and success for this couple just seems like a disaster, with more misery to be heaped upon Hana. Far from the "hilarious rivalry" described on the back of the book, I just see an older man treating a young girl like garbage and demanding dates where goes out of his way to make her feel poor and inferior. It's neither fun nor funny, just painful to watch. She might as well be dating Donald Trump, frankly.

I'm willing to accept that my dislike stems from not being the target audience for this one, but I'd love for a fan of the genre to explain to me what the appeal is, because it escapes me.

4
Painful instead of funny, this is a manga that desperately needs to evolve the hateful male protagonist.