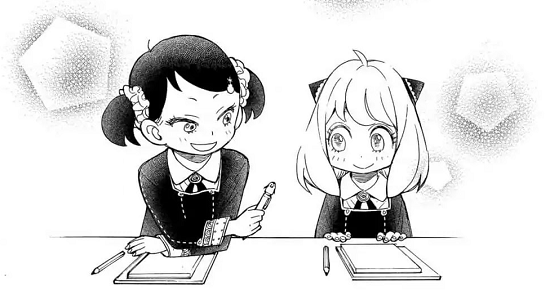 When we last met Agent Twilight, it seemed that Operation Strix – his mission to prevent a terrible new war between Westalis and Ostania – was pretty much sunk before it had even left port… as interviewing techniques go, literally smashing the assessor’s table to pieces is not something they often recommend during skills lectures at the Job Centre, and that’s something “Loid Forger” will have plenty of time to review as a Job Centre is probably where Twilight is going to end up once Anya’s failure to get into the prestigious Eden Academy is confirmed. The fake fledgling family risks falling apart before it’s even begun, but can the hidden talents of the trio hope to turn the situation around?

I greatly enjoyed volume one of Spy X Family, but a criticism that I did make back in my previous review was that some scenarios were left-underdeveloped and opportunities for action and humour missed when some incidents were a little undercooked. Unfortunately, the very first chapter of the second volume repeats this problem.

The situation is that Anya has failed to make the grade and hasn’t won admission into Eden Academy – but the schoolmaster Henderson, impressed by the "elegance" of Twilight’s behaviour during the interview, has been able to pull some strings and at least keep Anya on the reserve list. This leaves hope that Anya can still make the cut if other children offered places subsequently decline them and leave room for her to move up. The set up for an entire story arc is blindingly obvious – Twilight needs to use his espionage tradecraft to investigate another family and cause them to drop out so that Anya can take that place instead. The plot hook is baited with a juicy wriggling worm and dangling right there in front of you… and Spy X Family turns its nose up at it. Nothing happens, at all! The Forger family are told to wait in case they get a phone call, they duly wait and get the phone call, and Anya is accepted after all. None of the family have any involvement in proceedings at all! Plot progression is handed to them on a platter! The agents have no agency! Yor the assassin does have a brief dream sequence where she imagines knocking off a few seat-blockers, but she decides she can’t go through with a hit like that and again the characters do nothing. How can you have protaognists who are not proactive? It is utterly baffling to me.

It’s possible that Tatsuya Endo was planning a storyline along those lines but got cold feet and abandoned it early – it’s understandable, he wants Twilight to be a goodie and maybe he was reluctant to depict him inflicting kompromat that screwed over a hapless mark purely to serve his own interests. Nonetheless, Endo has made a mistake – it didn’t need to be like that. Say that, amidst all the happiness and cheering of the pupils reading their successful passing on the annoncements board, Anya detects a discordant thought out of place. There’s one boy who’s actually upset at getting into Eden. She reads his mind and finds out that although he passed, he doesn’t want to go to Eden but to a less prestigious school where all his friends are, but equally the boy feels that he cannot go against the wishes of his ambitious father. Anya finds a way to convey to Twilight that this boy’s family is the one he wants to track and learning of the situation themselves Twilight and Yor set about laying evidence that persuades the father of his son’s real wishes, allowing him to back out on his own terms – an alternative chapter which ensures that everyone wins. As it stands in the actual manga though, it really does feel like a waste.

Another scene which I don’t think works as well as it could have done is the final reveal of the identity of Yor’s brother Yuri. The scene itself has the right idea, I’ve no objection to the principle of how it’s done, but the timing is just a bit off. Yuri turns out to be a member of the Ostanian secret police, a two-faced figure who’s a sadistic Stasi torturer by night but a fresh-faced youth with a bright innocent smile who dotes on his beloved sister by day. It’s an effective role – another hidden identity in a family that are all concealing things from each other and an antagonist that Twilight, as a Westalis agent, cannot just top off and must manoeuvre around more carefully. Yuri’s reveal comes when he suddenly drops in on the interrogation of an informant in the security service headquarters – we see Yuri as he walks in the room, then the scene switches to a page of other security guards chatting about him, then we cut back to Yuri playing good cop before very dramatically switching to bad cop. The reveal is a shock but the cutaway distracts you as you’re trying to process it and getting a long look at Yuri before he actually engages in the interrogation robs it of a little momentum. It would have been sharper and more striking if Yuri’s face was kept hidden until he plopped down in the chair and the informant noticed him through banged-up bleary bruised eyes.

That might seem to be a lot of criticism to make, but I want to emphasise that these scenes are not bad, just not quite as good as they could have been – and outside of them Spy X Family continues to fire on all cylinders. There’s no sophomore slump in this second volume and it continues to throw up interesting and amusing scenarios in equal measure. Anya’s mind-reading powers continue to be not the simple unlock-every-door cheat code you expect, and there’s surprisingly consistent continuity for a comedy series – back in volume one, Twilight dismissed the seamstress who runs the shop where Anya gets her school uniforms as an unsuitable candidate for his sham wife because she had anti-government sympathies. At the time this was just a throwaway disposable background line and you didn’t pay it much attention, but the seamstress gets a few lines in this volume and those anti-government attitudes come out in dialogue and have an impact on Anya and Yor, so even the minor extras have a personality.

There’s also good forward planning to make sure that Anya’s time at school stays interesting – getting into Eden Academy is only the first phase of Operation Strix, it’s only a means to an end to allow Twilight to get close to Donovan Desmond and disrupt his war plans. To do it, Anya has to find a way into the top stream honour student roll by earning “stella stars”, Eden Academy’s version of merit marks for exceptional academic performance and community service. It sounds like a fairly straightforward structure, but to make sure that school scenes doesn’t become too predictable an alternative track is introduced by Anya’s… tempestuous relationship with Damian Desmond, the target’s younger son and Anya’s classmate. It’s a good arrangement – like a game of Deus Ex where you can secure the objective either by sneaking around with the tranquiliser darts or kicking the front door in with the rocket launcher, it ensures that the story is able to switch gears every now and again and doesn’t get too samey.

The art remains as strong as it did in the previous volume – there are some spectacular money shots, and Yor smashing pumpkins just tees up a great one when Anya and Damian get to squabbling. It’s not only a brilliant shot it’s good for the story too – Damian isn’t just simply an antagonist, because being a wealthy son he’s never had anyone challenge him before so Anya’s hostility fascinates him (and maybe even somewhat attracts him too), setting up more on-again off-again variety for the future. One interesting detail of the art is on the cover – the shanks of the ‘M’ of ‘Family’ being split by silhouettes of the Forgers is a cute touch (and something not done on the original Japanese tankobons so it's a subtle way for the English publisher Viz Media to add its own flair to the design), but the main thing I want to focus on is the unusual bench that Anya is sitting on. This is actually a real piece of furniture, the “Marshmallow Love Seat #5670”, a sofa that is one of the signature pieces of the famous Modernist designer George Nelson and originally manufactured between 1956-1961 (modern reproductions of the "Marshmallow" sofa go for just shy of five grand... I think you might be waiting a while if you're hoping this one will turn up in a sale at DFS!). Indeed, all of the props shown on Spy x Family’s five tankobon covers up to now reference classic pieces of art furniture. The retro stylings indicate that Spy X Family is keen to set up a Sixties atmosphere – fitting in with the spy-craze era of television – but while it makes for characterful and playful covers not really much of that swingin' sensibility seeps through into the interior art. In the back-matter omake material Franky says “high-resolution scanners didn’t exist in my time”, but other than a background glimpse of a reel-to-reel tape recorder in a computer room Spy X Family really feels entirely like a piece of the modern day, particularly when the family visit an aquarium which has massive plate-glass viewing portals they definitely didn’t have sixty years ago. It’s not an essential detail by any means, but Spy X Family hasn’t reached the dayglo kookiness of shows like The Prisoner quite yet!

Still, backgrounds aren’t overly important in Spy X Family – the faces remain extreme-close-up and centre and are as expressive as ever! Spy X Family capably continues as a crazy spy caper throwing up all manner of interesting scenarios, and I’m excited to see the resolution to what’s going to be one very strained family dinner in volume 3. Careful with the cutlery, Yor…

8
Keeps the first volume’s momentum with plenty of tight espionage entanglements to laugh your way out of.