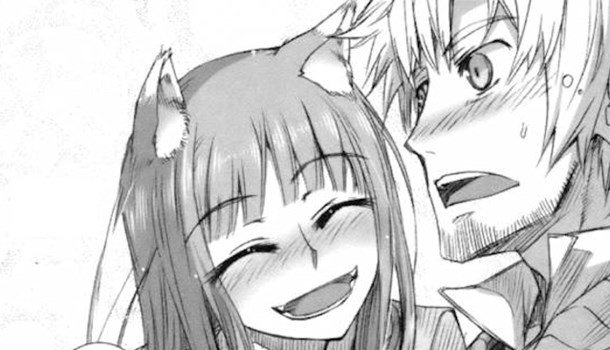 It’s no state secret that I am a big fan of Spice and Wolf - The tale of a merchant’s encounter with Holo the wisewolf in its anime form is a mature and somewhat different take on the male/female dynamic that most anime series enjoy. Normally the manga that an anime orginates from is seen as the superior medium, but is that the case here where the manga itself is derived from a series of light novels?

As mentioned, Spice and Wolf follows Kraft Lawrence, a merchant by trade who travels from city to city buying and selling in a bid to make a profit and earn enough money to open his own shop. Whilst in a village during a pagan festival, Lawrence encounters a naked girl in his cart. Sporting a pair of wolf ears and a tail, the girl introduces herself as Holo the Wisewolf, a being from local folklore. The pair both begin their journey back to Holo’s homeland where they make plenty of deals along the way.

If there is one thing that I’ve always loved about the Spice and Wolf series it's the character of Holo herself. She is not your typical heroine that appear in anime and manga - She's intelligent and she knows how to play off the clichés of the anime world to get what she wants, even if it’s just to tease Lawrence a little bit. Even Lawrence fits into the world nicely; while being wise to the world, he isn’t the typical anime male lead who is terrified to talk to women or even look in their general direction. Their relationship is a real, believable one that is so rarely shown in any sort of medium. The manga, much like the anime, manages to bring this across perfectly. Holo doesn’t need things dumbing down for her, you talk to her like a regular human (for lack of a better word) and she reacts as someone normally would. No over the top cuteness, no tugging at the heart strings, it’s about being herself.

As I said, the manga brings this across perfectly. While it does make the story a little wordy, the dialogue exchanges between Holo and Lawrence are easily some of the best you’ll read in any manga. They both bounce off one another so well that the conversations progress and flow in a nature and realistic manner. You’d swear that this conversation actually happened somewhere.

A positive that the manga does have over the anime is that some of the more complex conversations regarding the economy and the deals that Lawrence sparks up are a little easier to understand here. This is mainly down to some very helpful diagrams that help give the thinking behind what a lot of people are saying. If there was one complaint about the anime, it was that the economic talk was at times often mindblowing in its complexity, so to be given time to read something at your own pace and understand it better really does help with appreciating the story. There were occasions in the anime where you knew something was going down, but were just never entirely sure of the exact who, what and where.

The artwork is something else which is quite superb here; Holo in particular is designed with the right balance of cute young girl and someone who is clearly not to be taken lightly. Lawrence himself is designed just as well, though at 24 he has white hair which can only lead us to assume that being a merchant ages you horribly. Every panel in the manga is full of rich detail, giving plenty of scope to the world that the two inhabit.

Yes there are naked scenes in the manga, hence the large “Parental Advisory” sticker on the front, but it is never in a sexual context. Fanboys will whoop when Holo undresses, but it is only in regards to the current situation and always within the context of two adults within a relationship that isn’t sexual. True it’s not something you want to turn to while sitting on the train, that is a given, but for those expecting Holo to ask Lawrence to make an honest woman out of her, you are going to be disappointed.

If you are looking for something that isn’t about saving the world or bringing an evil empire to its knees, then Spice and Wolf could be for you. The focus on the characters is what shines the brightest here and if you're not charmed by Holo and Lawrence’s relationship then it may be best to stick to your guns and swords. For those looking for something that isn’t going to insult your intelligence and is more about using your head rather than your muscles to get out of situations then you are in the right place. Just be warned, you’ll never be able to look at apples again without raising a little smirk.

9
Intelligent, beautifully drawn manga is hard to find. So thrash this little wolf for all it's worth.