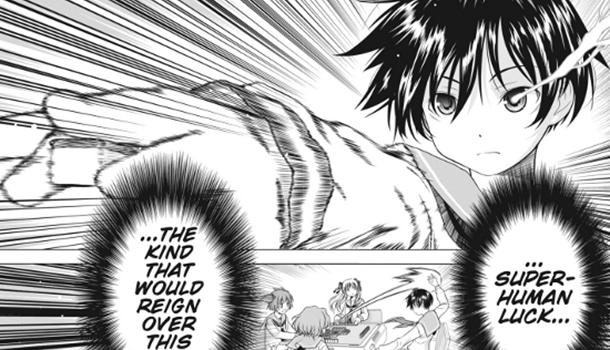 Saki Miyanaga doesn’t like mahjong. Her family takes it way too seriously - when she wins they get upset but if she loses, she goes without pocket money (much like my family and Scrabble). Despite this, she gets hoodwinked into visiting her high school’s mahjong club, where she begrudgingly plays a few games and leaves after breaking even. But wait, breaking even in mahjong is nearly impossible - the ability to do so must hide some obscene level of talent! The club bring Saki back and, after a little persuading, encourage her to join their ranks and aim to reach the prestigious High School National Tournament together!

One of the core questions about this series is “Do you need to understand mahjong to enjoy the manga?”, to which the answer is a tricky “Not really”. From my own perspective, I know enough about the game to understand the flow and mechanics of how a game is run, but precisely zero about scoring hands and how to make them come into being. Don’t even try and ask me what a dora is, I have no idea (I think she's an explorer - Ed). With that in mind, Saki still works great as a tense and enjoyable read, mostly as you have the cast constantly flipping out in nearly every panel about the shenanigans that are transpiring. The series understands the golden rule of mahjong series - that the game itself is secondary to the human drama and of having characters constantly lose their nut over how the game is unfolding. From talking to friends who do know mahjong this is the appropriate attitude as most of what happens in Saki is apparently outlandish and highly unlikely to transpire in real life games, but this does not degrade the excitement from reading it. It also helps that the series is quick to get into games and generally moves at an enjoyably fast clip - it feels engaging and keen to show you a fun time. The panelling helps accelerate this, enhancing the “mind games” aspect of mahjong as it jumps rapidly around the table and then showing you a dynamic 2-page spread to land the coup de grace.

Character and setting introductions are done quickly and effortlessly - one key element is how the world the series takes place in is absolutely saturated in mahjong, both normalising and elevating the game instantly and setting the groundwork for how seriously everyone treats it from there on out. It reminded me of Girls und Panzer in how it quickly sets up the rules for the world in this manner. The characters themselves are an interesting group and instantly likable, or at the very least are intriguing enough for you to stick around and find out what makes them tick. An early favorite is Yuuki, who spends most of the volume eating tacos and being overly energetic.

This release by Yen Press does make a game attempt of proving translator notes regarding mahjong and the hands-on display in the gaps between panels, but these have wildly varying levels of required knowledge and thus efficacy. One page the notes are nice and simple, and on the next they have jumped back to being arcane. It’s nice to have them there, but more often than not I found myself muttering “No idea what that means!” It isn’t the fault of the release, as Saki itself launches into the mahjong assuming you already fully understand the game, but a brief primer included in the volume would probably go a long way. There is one on the Saki Wiki if you want to dive in, but as previously mentioned you can get by absolutely fine without it - I did.

The art in Saki looks great, but has some bizarre kinks to it that have a habit of getting on your nerves once you notice them. Key among them is that the level of detail on characters varies wildly from person to person, even among the main cast. Some characters are afforded all the detail they could wish for, whether on the intricacies of their clothing or their hair (Nodoka, for example), and others look like a bizarre low-detail facsimile of themselves, like Hisa. One of the things afforded the most detail is the almost voyeuristic attention is the female character’s skirts and thighs. Through a combination of camera angle, pose and the very short skirts usually worn by the characters you get a lot of near-upskirts, which feels downright exploitative. The series does not (at least so far) have any panty-shots present but this way almost feels more scandalous as a result given how frequently and prominently these angles appear, and how much they show. There are very few men present in the series (There is only one male recurring character, in fact, and he barely exists) and they get the worst of it - they look like wavy tube men, all long limbs with joints begrudgingly slapped in.

The rest of the art - the backgrounds, et cetera, look fine and well presented - the main flair in the art comes during the mahjong matches themselves when you have all manner of sparks flying, flames erupting, and metaphorical mindscapes dragged into the game space itself to drive home the action. It’s fun stuff, with a wild imagination that lets itself go to good effect.

One dull practical point I want to make is that this release is digital-only, and is being sold for the very reasonable price of £2.50 (at the time of writing) on a respectable set of eBook platforms - Kindle, Kobo, iBooks and Google Play (Nook has somehow fallen off this list, which is vexing). The second volume is not yet scheduled so I hope this is not a mere experiment!

I really enjoyed reading Saki, to the point that directly after reading it I jumped to see if there was a release date set for the second volume - at the time of writing, sadly not! While I could really do without the infrequent leering up the girl’s skirts, everything else in the series is great fun and I can't wait to see more dynamic mahjong battles I can barely follow but revel in.

8
Its art isn't always a-dora-ble, but this is an enjoyable start to a series that doesn't require expert mahjong knowledge.