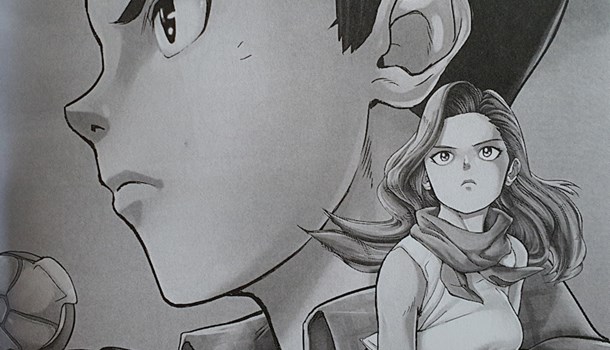 I have to admit that I'm coming to R.U.N. (Remember Ur Nature) vol.2 extremely late thanks to a manic schedule, but having now had a chance to catch up with Jean, Keigo and Kishi, it's good to know it's been worth the wait.

R.U.N is a parkour-based manga which follows our protagonists preparing for their next run in with top dogs Team Ninja, as they struggle to find a fourth member to make up the required numbers for a battle royale between Traceurs. With team-leader Keigo unable to convince his mysterious Parkour mentor Kondo to enter the fray, the obvious candidate seems to be Kishi's sister, Onoyumi, a talented gymnast in her own right. Her brother is dead-set against it, so the task to change hearts and minds is on if Keigo wants to defeat Team Ninja and reclaim his father's stolen medal.

The artist from the previous volume, Manos Lagouvardos has moved on, with Chapter 9 handled by Luis Figueiredo (Insta here) and the subsequent chapters drawn by Roberto Fernandes (Check out his Instagram) . The styles are markedly different, with Fernandes heavier on the tones and very dynamic poses, while Figueiredo's sketchier and more casual style relies on dynamic angles to convey motion (though his understanding of proportion and anatomy are spot on, especially Onoyumi's gymnastics). Both work perfectly in their own ways, and as a child of the Marvel UK age, where art styles differed from issue to issue, I enjoyed the stylistic contrast in this volume that simply doesn't exist in Japanese manga.

The story's clear Shonen influence is writ large, and honestly there's a great deal of similarity with Oh Great's Air Gear series - street sports, gangs and training all melding together to make a compelling narrative. R.U.N's influences are both a strength and weakness, with the narrative benefitting from years of trial and error in the genre it's emulating, crafting likeable characters and urgent situations for them to overcome, while at the same time it's also a tad predictable simply due to the nature of what it is. That's not to take away from R.U.N's quality, it's simply taking cues a genre that's been around a long time, and honestly it's unavoidable. The good news is, if you love Shonen, then you're sure to enjoy what R.U.N has to offer.

The series has a strong grasp of Parkour from what I can gather (a quick bit of googling various technique names seems to check out) and it's clear that there's a passion for this line of sport from the authors. This puts me in mind of How Heavy are the Dumbbells You Lift which It also uses technical information to lend an air of realism to the capers surrounding the subject matter.

R.U.N then is a strong book - it's well written, looks good on the page and has a solid cast. All the more impressive that it's not a Japanese-originated title but rather created by a Greek team who have a clear passion and enthusiasm for Japan's sequential storytelling. I'd highly recommend it to those open-minded enough to try something of a slightly different flavour.

9
A Shonen homage that's actually better than a lot of Japanese Shonen, R.U.N is a fun romp driven by passion.