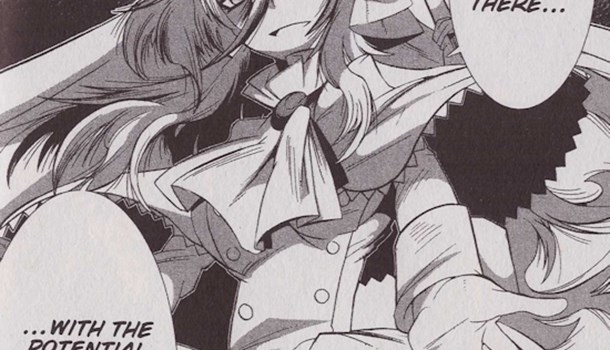 Having recently looked at one of the two Madoka Magica spin-off manga to grace Japan, Kazumi Magica, the time has come to take a look at another series looking to make use of the mega-hit anime's cachet - Puella Magi Oriko Magica.

While Kazumi Magica simply took the broad concepts and world of the original series as a basis featuring an all-new cast of characters, Oriko Magica takes an arguably braver route in setting itself around the same location as Madoka Magica - thus, Madoka and Homura make cameos, and both Kyoko and Mami feature heavily in this first volume.

There are, however, other new characters which slot into this particular worldview - of course we have the titular Oriko, a rather mysterious magical girl in her own right; there's her devoted yet eccentric companion Kirika; and a very young girl named Yuma who winds up accompanying Kyoko on her own witch-hunting adventures whilst struggling with a decidedly difficult past which has left her alone and homeless. With a supposed serial killer of magical girls on the loose in the area alongside the usual trials and pitfalls of this "profession", it's a tense time for all involved, while Kyoko is also determined to ensure that Yuma doesn't follow her own path, telling her in no uncertain terms that she shouldn't make a contract with Kyubey. Unfortunately, it seems that other players in this sinister game have different ideas, and have a vested interest in the powers dormant within Yuma...

Where Kazumi Magica felt like a bit of a cash-in when push came to shove (albeit one with some potentially interesting ideas of its own), Oriko Magica does at least feel on solid ground in terms of its setting and sense of place - while I'm not sure exactly where it intends to sit within Madoka Magica's canon, it at least has sufficient timelines to choose from to make an excuse for itself.

This opening volume also plays on some of the more interesting aspects of its parent series, that being the uneasy prospect of magical girls competing for limited resources rather than co-operating for a common goal, and of course Kyubey's nefarious interests. At this point in time I'm not entirely sure where (or even if) Oriko Magica is going to follow through on its discussion of either of these concepts, but the promise is certainly there even if some of this early execution is decidedly heavy-handed.

Perhaps the biggest hurdle in the way of the series at this point is its artwork, which put simply really isn't that great. Yes, you can see what's going on in each panel clearly enough, but characters go off-model far too frequently, and despite using characters from Madoka Magica it often takes a little while to figure out who these characters are supposed to be, which gives you an idea of how wayward the art can be. Even at the start of the volume it took several pages to figure out that it was indeed Kyoko we were being introduced to, and even that revelation only came as a result of her chowing down on some Pocky!

Beyond its art, Yen Press' presentation of the volume as a whole is without quibble, with a solid translation and print quality that is par for the course with this particular publisher.

Much like its fellow spin-off series, Oriko Magica is an effort that we have to talk about in terms of potential rather than anything more tangible at the end of its first volume - I'm intrigued by some of its new characters and the areas it seems to be exploring, but who knows whether this intrigue will turn into delight or disdain with its second (and final) volume? If you can get beyond the rough art style and occasionally simplistic storytelling, there's at least something of note to be found here, although it might be worth waiting until October and the second half of the series before picking it up for yourself.

5
It doesn't look great, but this at least feels like a true spin-off to Madoka Magica, and it certainly has some potential to deliver at this point assuming it has the time to do so.