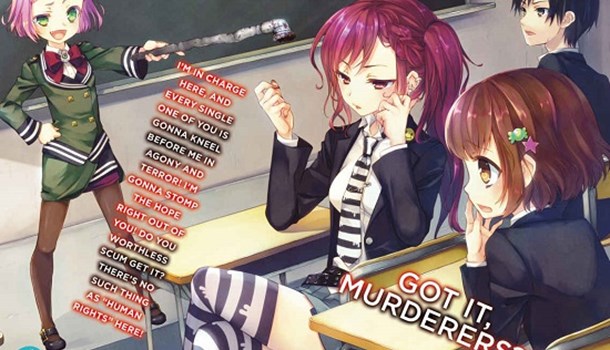 Most anime are adaptations that are designed to promote pre-existing manga and light novel series, and it's certainly true of Yen Press's light novel division - most of its titles reverse the process and bring over the original light novel which we're interested in for exploring the source of anime that we received earlier. Of some twenty-five light novel titles in Yen Press's catalogue only three don't have an accompanying anime - Book Girl (a series that was discontinued in 2014), The Isolator (whose first volume was we reviewed last year) - which is really a bit of a cheat as even if it doesn't have an anime it's got momentum as a follow-up project of Sword Art Online author Reki Kawahara - and today's title Psycome: Psycho Love Comedy. That Psycome has no other connections is what made this novel jump out of the shelves at me when I was looking for something new to read in the bookshop - if Yen Press are confident that Psycome can stand on its own without needing the publicity of an anime to help it find an audience, it must bring something special to the table. Let's find out what.

--alright, I'm bored now. Isn't it obvious how this is going to go? Do I really need to say anymore?

Suffice to say then that Psycome doesn't have an anime only because it's pretty much an anime on paper already. I've often been reluctant to buy in to light novel series because many of them come across as "described anime", lacking any unique insight that can only be told in text and instead just being someone writing down what he's seeing on the screen, and if Psycome doesn't have an anime version yet it's only because they haven't dotted the i's and crossed the t's on the contract yet - it apparently won the Enterbrain Entertainment Award of Excellence, it's clearly being set up as a future project. The manuscript is practically a screenplay. Whole tranches of the book are uninterrupted dialogue with  scarcely any scene-setting, characters don't just laugh they are written out in full as going "Gyah-hah-hah-hah-hah-hah!" for the SFX team, and a character who's slumped on the ground after taking a beating is a "pixellated" mess.

A word of advice to novice scriptwriters. While you're reading Psycome and wondering if it's even possible for someone to cock her head "dramatically" (you can tell the authoress Mizuki Mizushiro wanted to write "she did the SHAFT Head Tilt thing" but her editor pulled her back for copyright) or for someone to cross her arms "quizzically" (I tried in front of a mirror for a while - disapprovingly, truculently, determinedly, but not quizzically), you should note that directors hate these 'wrylies' as the writer presuming to tell them to how do their own job in setting the tone - filling the scene with adverbs is a sure way to get your screenplay round-filed!

Anime is frequently criticised for being utterly enslaved by its tropes and character archetypes and Psycome will do nothing to disabuse you of the notion. An overriding structural theory that dominates anime is the notion of the 'self-insertion fantasy', essential to which is the assumption that readers will only be interested in following a protagonist who's 'relatable' and the only way to make him relatable is to make him as much of a drip as they all are. Hence a dramatis personae who are all as virginal as harpsichords (so as not to be too threatening to younger teens who are still a bit awkward about sex and older otaku who feel humiliated by their romantic failures) - and rest assured, anyone shopping for a waifu, Psycome stresses that Kyousuke's harem are all sold new with the wrappers still on - and hence Psycome's hero Kyousuke himself.

The only thing Kyousuke cares about is protecting his little sister's smile and so to defend his "kawaii imouto-chan" from bullies he's become an expert street brawler who while he abhors violence can nonetheless beat up entire gangs of thugs and hoodlums single-handedly and leave them bruised and cowed. After being falsely accused of killing all the members of a gang that he had been rumbling with, Kyousuke is arrested and packed off to the Purgatorium Remedial Academy. It's very much like an ordinary high school that you could find anywhere - except that the Purgatorium Remedial Academy is a prison intended to rehabilitate young killers and every one of Kyousuke's classmates is a convicted murderer... many of whom want to prove their place at the top of the jail-cell pecking order by taking down the hapless, unfortunate Kyousuke who now finds himself with the unwanted and incorrect reputation of the "Warehouse Butcher" with the highest kill-score in the class.

The problem with this all is that from the illustrations in this light novel you couldn't imagine Kyousuke punching out a fairground dumbbell let alone a mob of cold-blooded killers yet we're told that his nicknames at middle school were, no joking, "Megadeath" and "Slayer", like he's going to be chainsawing demons from Mars alongside Doomguy. Bakemonogatari's Araragi  may have had a bevy of gorgeous girls throwing themselves down in supplication before him and begging for sex, ensorcelled by his manliness that can even turn lesbians straight again, but at least he's got a six-pack to show off. Psycome's Kyousuke has the Generic Anime Protagonist mop of untidy black hair and he has the Generic Anime Protagonist skinny, gangly build with no definition or shape, a figure attainable for a couch-potato anime watcher who might now indulge in the flattering delusion that if he was cornered by muggers in an alley he wouldn't just melt into a mewling puddle.

Psycome could have done either of two things with Kyousuke to keep my interest. Hold Kyousuke to his word when he insists that he's an "ordinary guy" - make him a totally non-violent dweeb who wouldn't say boo to a goose. This would make his confrontations with the other inmates more high-stakes and interesting because he'd have to deceive and misdirect them so they don't realise that his tough-guy reputation has nothing behind it, with dire consequences if he fails. Or, make it so that Kyousuke isn't imprisoned through mistaken identity - he's a killer, guilty as charged. He doesn't need to be a sadistic sociopath, he may even regret his path in life unlike the other incorrigibles in his class, but he's as much a murderer as the other inmates. The complexity of dealing with a morally compromised protagonist would make it an engaging story of redemption as much as escape.

Unfortunately each alternative would pop the preciously thin bubble of the self-insertion fantasy (in the former case deflating the power fantasy, and in the latter case making him too 'unrelatably' assertive) so they're clearly non-starters. It also means that whenever Kyousuke is threatened you're not the least bit interested because you know that he's going to bust out the champion street fighter moves and handily beat up his attackers, but never too much. Violence is always cartoonishly exaggerated - people are bloodied and battered with broken bones but a spin round the nurse's office and a couple of cosmetic bandages and they're fighting fit once more - and a particularly laborious running gag is "Mohawk", an inmate who attacks Kyousuke's homeroom teacher every morning and gets smashed to paste by her iron pipe.

So far, so formulaic. I suppose that the clue was in the name - "Psycho Love Comedy" is there on the cover and it is an entirely conventional harem romance with all the accidental-pervert boob gropes you expect and need. But it does still have a somewhat different setting - does a different number give any new answer to the equation? For all that I've ragged on it for being panifully generic throughout, towards the end of the book Psycome does finally start to do a few interesting things. A pertinent and penetrating point is raised that most of the inmates of Purgatorium Remedial Academy are just ratbag scrotes who cold-cocked some helpless sap, which doesn't make them elite assassins even though they're swaggering around the place thinking they're Charles Manson. This could well be applied to most real-life wiseguys; in a typical high school setting these would be the chuunibyou characters (and several of them fulfil the role exactly). Also, the tsundere Eiri is not just lumped with Kyousuke for plot convenience but she does actually have a real, legitimate, understandable and quite purposeful reason for her initial interest in Kyousuke given her background. Kyousuke's avoiding the fawning of other girls has a better reason than the monkish celibacy of most other protagonists as they're insane and want him to join them in love-suicide pacts. The teacher Kurumiya is a pint-sized 'adult loli' hitting similar beats to Pani Poni Dash and A Certain Magical Index but she does have a ballsy face-down with Eiri. The plot twist that the Purgatorium Remedial Academy is not for reforming killers but breaking them down into professional soldiers doesn't just come out of nowhere but is suitably foreshadowed by Kyousuke's bruising encounters with the second-years, although again it's an unfulfilled opportunity because if Kyousuke had genuinely been a killer then the 'fight against human nature' challenge to resist the programming would have been much more appropriate - as it is, it's just a black and white struggle between the baddie murderers and Kyousuke and his friends as the goodie non-murderers. Finally, given how Kyousuke values his little sister's innocence the suggestion in the epilogue that she's going to kill to follow in his footsteps could present a real dilemma for him, but Psycome is going to chicken out and keep her pure anyway (as given away in the over-expository blurb for volume three on the Yen Press website) so it really just annoys me.

If you've got a moody adolescent edgelord for a nephew then the murder school of Psycome is probably going to be like catnip for him so it may be worth buying into this light novel series for a Christmas present. Other readers might get a bit of amusement out of the exaggerated action but while Psycome admittedly has an unusual, distinctive setting it doesn't do enough with the concept to be more than brainless comfort food - and as watching is easier as reading seeing as it's empty either way I figure I may as well just wait for the inevitable anime.

4
It misses its opportunities to break free from the harem rom-com formula and just ends up running circuits in the prison yard.