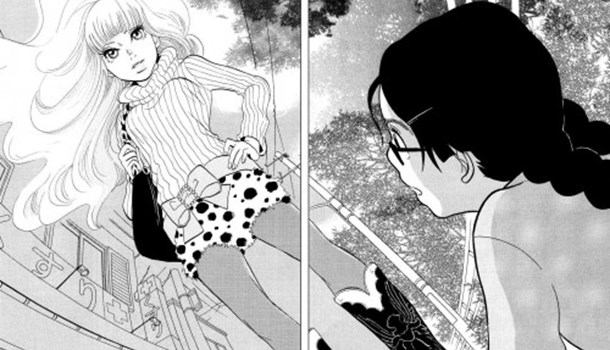 Princess Jellyfish is a title not unbeknownst to most manga and anime fans. Where the anime unfortunately only saw one season, the manga is still on-going. With the first two volumes now bundled and published in one, there’s no better excuse to re-visit the beautiful story created by Akiko Higashimura.

Princess Jellyfish revolves around eighteen-year-old Tsukimi Kurashita who moved to Tokyo to become an illustrator. There’s just one small problem: she is socially awkward with terrible fear of social interaction, stylish people and serious employment.

Tsukimi resides in Amamizukan, an apartment building she shares with five other women who are all otaku in their own way, their obsessions ranging from trains to dolls. Tsukimi herself has an obsession for jellyfish, stemming from the memory of her deceased mother taking her to an aquarium when Tsukimi was young. There, her mother compared the frilly-looking jellyfish to princess dresses, stating all girls are princesses. All of the women living in Amamizukan are NEETs (Not in Education, Employment or Training). With their (sometimes literally) petrifying fear of strangers, especially stylish ones, you may expect them eager to change. Instead, they seem to take pride in their shut-in status, referring to themselves as ‘Amars’ (nuns) and discouraging each other from venturing outside. Their number one rule? Absolutely no men allowed!

One evening Tsukimi passes a pet shop where she spots a spotted jellyfish. With her immense knowledge of jellyfish, she notices the jellyfish is being held in poor conditions and will die soon if it doesn’t get help. Adamant on saving the sea creature, Tsukimi enters the pet shop to warn the owner about the jellyfish’ impending doom, only to petrify in fear once she notices the emoployee to be both male and stylish. As the employee tries to shoo Tsukimi off, a beautiful woman suddenly appears, saving both Tsukimi and the jellyfish. In awe, Tsukimi concludes this woman is definitely a princess, unlike her otaku self.

Tsukimi takes the jellyfish home, followed by the beautiful woman who doesn’t seem to have any intention of leaving. Tsukimi is rather nervous letting her saviour enter Amamizukan: the beautiful woman is way too stylish and will scare the other tenants. However, since it’s late and the woman did help her rescue the jellyfish (not to mention the woman just not taking no for answer), Tsukimi lets the beautiful stranger stay over in her room. The next morning, Tsukimi wakes up to a shocking secret: as the wig of the woman slides off, Tsukimi discovers this beautiful princess is a man!

With this introduction to Princess Jellyfish, you may expect a story revolving around hilarious situations where Tsukimi desperately tries to hide the true identity of her newfound friend. You wouldn’t be wrong – the mysterious cross-dresser, revealed to be named Kuranosuke, definitely does not try to hide the fact that she is in fact a he. Tsukimi has to put quite some effort in to hiding his true identity from her housemates, mostly by bursting out in song when Kuranosuke refers to himself as male.
As the story progresses, you’ll soon find there is a lot more depth to be found in Princess Jellyfish. Aside from the funny situations where Kuranosuke tries to lure Tsukimi and her housemates out of their otaku shells, and of course the obligatory makeovers, there is also a good dose of drama to be found. Kuranosuke isn’t just a happy-go-lucky cross-dresser, having deeper reasons to dress up like a woman. Apart from her social anxiety, Tsukimi struggles with the death of her mother, feeling like she failed her by not becoming a beautiful princess. Initially trying to fend their friendship off, Tsukimi and Kuranosuke become close. When Kuranosuke is revealed to be the son of a well-known politician, as well as having a brother who seems to be interested in Tsukimi, and on top of that Amamizukan being listed to get demolished, Princess Jellyfish engages readers in a well-balanced mix of comedy and drama.

Besides the engaging story and relatable characters, the art of mangaka Akiko Higashimura is just as captivating. Having won several awards, Akiko’s popularity in Japan is undeniable, and with Princess Jellyfish she's managed to gain recognition outside of Japan as well. The tone of the story is instantly set when the first page opens with a beautiful, full-colour page of a young Tsukimi and her mother watching jellyfish. The art remains of high quality throughout, with characters depicted realistically yet charming, befitting the theme very well.

This omnibus, clocking in close to 400 pages, is an excellent addition to anyone's bookshelf - from already established manga-fans as well as a perfect introduction to manga for new readers.

8
A touching story about geeky girls.