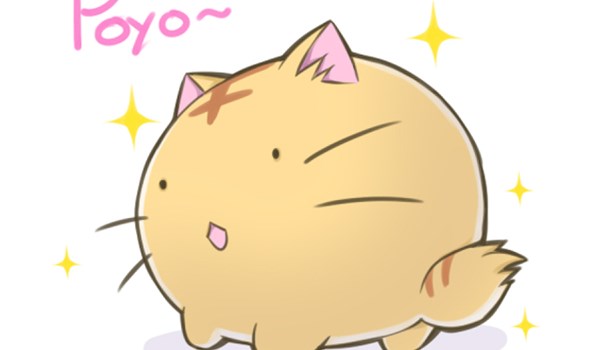 Being a fan of the PoyoPoyo TV series, I was pleasantly surprised to see that JManga had released the first volume of the source manga in English. Given I had already enjoyed the antics of the oddball moggie Poyo in the anime, I figured that taking a look at the manga couldn't hurt.

PoyoPoyo (to give its shortened title to save having to type it each time) follows the lives of the Sato family and in particular their newest member - a rotund ginger cat named Poyo who everyone frequently mistakes for other spherical objects, including bread, cushions, and anything other than a cat. In perhaps the most abrupt of origin stories, office worker Moe Sato falls asleep after a night on the town and wakes up without her handbag but with the companionship of the cat Poyo, who she instantly adopts and brings home to show off to her elder father and younger brother. Hijinks ensure, but i bet you could see that particular development coming.

Poyopoyo is presented in the vertical four-panel format that is typical for comedy manga, sharing a lot of the benefits and drawbacks of this method of presentation. Jokes come thick and fast, and even if one falls flat there is another gag right next to it you can move on to. This maintains a good pace to the comedy, even if it does mean that some of the better jokes feel a little wasted in the confines of just four panels. Overall, PoyoPoyo feels like it has a good range of humour - while not all of the jokes will make you laugh out loud there are more than enough inspired gags to keep a grin on your face throughout the volume. The tone of the series remains refreshingly grounded, focusing on the inherent comedy of the family rather than setting up unlikely or bizarre circumstances, and makes for a very easy and enjoyable read.

A lot of the entertainment value in the series will shine through if you are an existing cat owner or lover - I often found myself nodding in agreement to the series' depictions of the fickle foibles of felines. In fact, a a sizable amount of the 4-panel strips are dedicated to exploring the amusing oddities of pets and their owners rather than outright gags. Whether the series would gain the same traction with those who do not own cats I cannot say, but have a feeling it may leave such readers in the cold waiting for a punchline that isn't coming.

The art in PoyoPoyo is serviceable - in the main it looks outright adorable with its clear depiction of cats and their pratfalls and shenanigans. The series does, however, fall into a few pitfalls with its layout and designs that make it heavy going a times. The most jarring of these is when the author attempts to cram too many details into a panel to help set up a joke or deliver a punchline, which can make things hard to follow and cause your eyes to get lost in the sudden sea of objects and detail. In a few cases this caused me to zoom into the page in the Flash viewer (the digital manga equivalent of squinting and bringing the book closer to your face) in order to see what is going on in the panel. Thankfully, such cases were few and far between, but made me wish for a little flexibility in the panelling used in the series.

A more frequent oddity with the art is how the level of detail present in the characters oscillates wildly - the level to which they were stylised jumped up and down almost from page to page. Part of this may be a result that a large amount of the series was originally presented in colour when serialised, and then converted to greyscale for collection into a single volume. This was never a dealbreaker when reading PoyoPoyo, but it did cause more than one double-take as my mind had to adjust to sudden changes in character model, particularly in the main human character, Moe Sato.

One nice surprise can be found at the end of the volume - a story by the manga author about how they took in a stray kitten and this inspired them to write PoyoPoyo. This little extra is among my favorite parts of the series to date due to how personal and sincere it feels, and I almost wish more of the volume had been dedicated to it!

While it did not have me rolling on the floor in stitches, PoyoPoyo was certainly an enjoyable read with a lot of charm to it. Not all the jokes were winners, but the rapid fire pace of the series ensured I was never too far away from another gag that got me laughing. As mentioned above, I am not sure how much of the humour of the series would translate for someone who has not experienced the joy of looking after a cat, but it is certainly worth a look if in doubt as the human cast are no slouch either.

PoyoPoyo's Observation Diary is available to be read and purchased at JManga.

7
A nice accompaniment to the currently streaming TV series, and a definite source of mirth for cat owners.