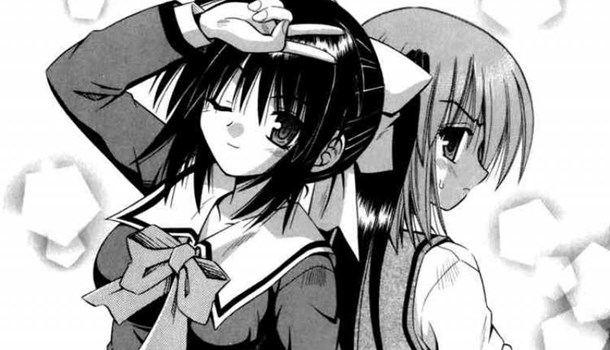 Severely allergic to felines, Yuuto Amakawa spends his mornings nursing a drippy nose courtesy of his friend Rinko’s cat. But on his sixteenth birthday, it’s not just Rinko’s pet that’s riling up his allergies (to say nothing of his hormones)! Appearing before him is Himari, a buxom, sword-wielding cat spirit in human guise, who has sworn to protect Yuuto, now the target of vengeful spirits! It’s clear that Yuuto’s allergies are the least of his problems — he’s gonna need Himari’s help if he wants to live to see his seventeenth birthday!

So begins the latest in a long line of wish fulfilment fantasy manga from Yen Press, who, to be fair, have a rather good selection on offer. Given that this book sits on the shelf shrink-wrapped, this particular purchase requires a leap of faith - or insight from a kindly website such as this ^^

Omamori (which looseley translated means amulet of protection) refers to Himari, the catgirl-demon who appears upon our hero's sixteenth birthday to protect him from the race of demons who have sworn to exterminate all demon-hunters, of which Yuuto is the last of his line. It's not particularly original of course, but then with books such as this that's less important than the quality of the artwork and the amount of ecchi moments the book can cram into it's first volume.

It does an impressive job on both counts.

The artwork is lovely - detailed, dynamic and expressive, it's certainly eye-catching. Of course, all this is simply a precursor to the real aim of the book, providing quality, titillating frames of panty-shots, breasts, swimsuits, girls being grabbed, falling over and looking cute. Usually mixed together in some order.

There's nothing wrong with this of course, but at times it's so transparent that it almost snaps you out of the story - Himari in particular is so stereotyped it's almost painful - she's kick-ass with a sword, but has no idea about modern life, referring to Yuuto as "My Lord", requiring his help to pick out modern clothing and even getting dressed.

This may all sound a little negative, and perhaps even prudish, but never let it be said I can't appreciate a book for what it is, and as an example of the genre it's actually rather good. Yes, the story is a bit thin and the characters nothing short of generic, but the vein of good humour running through the book makes it entertaining, and the quality of the artwork adds a level of polish that most books can only dream of.

7
Wish fulfillment for teenage boys with some very fine artwork. It may lack depth but it has a lot of polish.