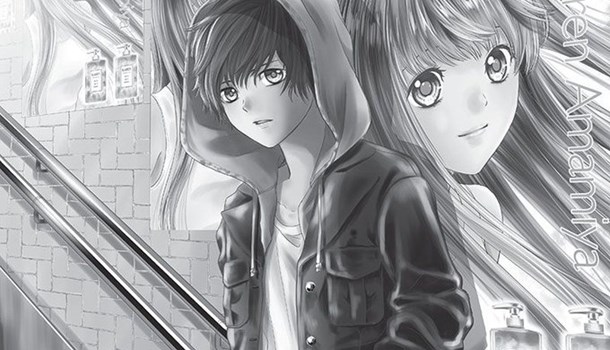 This s a fascinating manga. The tale of an ex-idol who was attacked by a fan at an event, she was so traumatised that she quit her group, cut her hair and now dresses like a boy at her new school to avoid attention.

Before I get into the book itself, I wanted to share why this resonated with me; at the age of 16 I was attacked by a gang and left for dead in an underpass, and like the book's protagonist Nina Kamiyama, this caused a huge shift in both my perspective and character. While Nina is thankfully not seriously hurt by her attacker, that moment of vulnerability changed everything about her, physically and emotionally. Before my own experience, I was passive, naive and assumed the best in people - the product of living in small communities and going to nice schools. After the event, it took me years to trust anybody new, I was fiercely protective of my own group of friends and got into trouble more than a few times for my aggressive behaviour. I still have the scars at the back of my head to remind me of that night, but in the 25 years since then I've learned to live with what happened, matured and become a lot more confident, but it took a lot of time for things to settle. The idea of becoming a totally new person overnight is something that's hard to get your head around until you've lived it, but Not Your Idol does an admirable job in conveying the experience.

Now I don't compare my experience with Nina's on a broader level - the book examines the particular problem of how society makes women feel vulnerable, the first volume covering everything from how girls choose to dress through to the public perception of female only carriages on trains, so don't for a moment assume I'm comparing issues on a societal level. But that one life-changing moment of pure terror? That I understand.

So with that established, let's look at how the book deals with these larger, gender specific issues. I have to say I was impressed. The way in which the aforementioned all-female carriage issues are addressed is superb. While some women want to use them, one of our characters in particular (Nina's popular classmate, Miku) says that only some men grope, and because she doesn't want to tar all men with the same brush, she won't use the new carriage. Her argument goes viral and gets retweeted - the responses on twitter praise her and condemn the women wanting to use the all-female carriages as ugly and undesirable anyway, which is exactly how I'd expect that issue to be dealt with on today's social media. As it happens, one of the girls who sided with Miku and takes the mixed carriage becomes a victim of groping, and you see the conflict she suffers at the idea of naming her attacker. The attitude of passers-by is also telling, and it's an issue that men simply don't have to deal with. In that sense, the book's show-don't-tell approach should be eye-opening for some male readers.

Issues of trust are central to the book, and the first volume is certainly a wild ride in that respect. Nina's former identity is a closely guarded secret, but someone is on to her, sending letters with photographs of her new identity to her manager. The list of suspects is varied too - Miku is certainly more than she appears, and a fellow student called Hikaru Horiuchi, who may even be the boy that attacked her, seems intent on getting close to Nina - everything is questionable, and when you have no ability to trust what's going on around you, how do you make decisions that will keep you safe? Even the members of Pure Club may have had it in for their lead singer, and what I thought might be a redemption story has turned into a subtle and chilling thriller. Nina's fear is so palpable that it made me actually nervous for her predicament! This is easily one of the most impressive books I've read this year.

Author Aoi Makino is telling a raw story, with more bite than I'm used to in this genre. The tone of her artwork shifts effortlessly from high-school drama to traumatic experience, the facial expressions are full of life and the panel layouts have a wonderful flow to them. The visuals capture Nina's self-inflicted isolation, and become all the more heart-breaking when you see flashbacks of her as a child wanting to become an idol, a dream made in childish innocence that would ultimately break her.

Thanks to my own experiences I'll always have a keen sense for the dangers of the world around me, and it's books like this that mean I'll hopefully have a better understanding of the additional issues my daughter will face as she grows up.

If you want to understand why the manga market is growing by 16% while US comics shrink by 7%, look no further. The last time I read a US comic that dealt with serious issues with anything approaching the sensitivity of Aoi Makino was Kevin Smith's Spider-Man mini-series The Evil That Men Do, and that was back in 2002.

10
Without hesitation, my manga of the year.