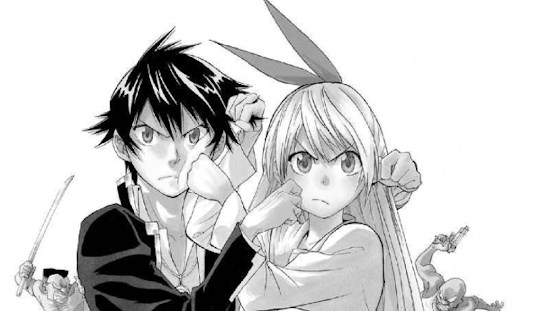 Budding romance in anime and manga often features a number of now well-worn tropes that are instantly recognisable to those of us steeped in its story-telling culture - boy literally runs into random girl (or vice versa); girl later turns up as a transfer student in boy's class; boy has a long-standing promise to a girl from his childhood but can't remember the face or name of the person to whom he made that promise.

All of the above tropes apply to Raku Ichijou - the decidedly reluctant son of a yakuza family, Raku is more preoccupied with his hazy memories of a promise made to a girl years ago. So important is this promise to Raku (ignoring the fact that he's forgotten her name and face) that he still wears the heart-shaped pendant that she gave to him; within that pendant is a keyhole, but who is the girl who holds the key to this heart?

Such thoughts are interrupted by the appearance of an energetic, loud-mouthed tomboy of a girl named Chitoge Kirisaki on the scene - after a rather unfortunate accident that briefly introduces the two, Chitoge is then unveiled as Raku's new classmate. This leads to the pair being forced together for a number of reasons as circumstances seem determined to keep this chalk-and-cheese duo in one another's presence - little do they know that this forced sense of kinship is about to become the least of their troubles; troubles compounded by Raku's interest in another classmate, Kosaki Onodera, who seems to have a secret that would be decidedly relevant to Raku.

As you might be able to tell from the description above, Nisekoi: False Love is packed to the rafters with clichés - every scenario, scene and set-up within this opening volume could easily have been lifted from one of countless other manga, so let's say here and now that if you're looking for something original to read this most certainly isn't a series you should expect such originality from.

However, there's something rather odd about this first volume of the series, and that's the fact that in spite of this lack of originality its story is actually still pretty fun to read. Yes, the story so far is as old as the hills and utterly predictable throughout, but somehow sheer strength of character helps to carry that story to a surprisingly effective degree. Protagonist Raku is a nice guy but has sufficient personality not to be a complete milquetoast lead at this point in time, Kirisaki is a fantastic ball of anger and energy who provides plenty of entertainment in her own right, and Onodera has just enough mystery beneath her sweet exterior to provide an interesting point to this love triangle.

Alongside this, the artwork in this opening volume also looks pretty nice - both the main and supporting character designs are pretty traditional but still pleasing to the eye, and the volume as a whole knows when to put detail into its backgrounds and when to keep things simple for maximum effect. Coupled with a decent translation to provide some smooth and occasionally amusing dialogue, the overall presentation of this digital release really can't be faulted.

Nisekoi might not have anything at this early stage to propel it into the upper echelons of romantic comedy, or even outright romance, manga - it's no Toradora or Kimi ni Todoke - but as a light-hearted, easy to read slice of fun it's more effective at delivering a satisfying sense of entertainment than you might think. If further volumes can build on these solid foundations, then this could well be a series that we end up talking about a whole lot more, particularly with an anime adaptation coming from SHAFT this autumn.

Nisekoi is currently available in digital form from the UK Nook store.

7
Its basic story set-up is rote beyond belief, but the sense of fun that pervades this opening volume more than makes up for any predictability with pure entertainment.